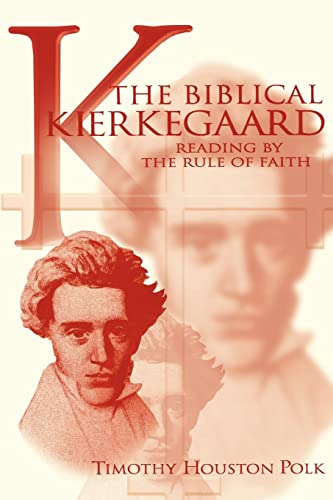 The Biblical Kierkegaard. Reading by the Rule of Faith

Discussions of biblical hermeneutics these days are prone either to sink under their own theoretical weight and never arrive at the biblical text, or to be pressed up so close against that text that they do little more than provide academic jargon for self-legitimation. Taking his cue from Kierkegaard, Polk navigates between these two extremes, and mounts a compelling argument for rehabilitating the old Augustinian ‘rule of faith’ as a cornerstone of modern (and non-modern) biblical reading.

His hermeneutical argument is essentially this: the text of the Bible is a given, but what matters is what we do with it, or more technically how we construe it. Construal is an essentially imaginative activity which is inseparable from wider questions of who and where we are as readers, and the particular imaginative construal at issue here is the decision to read the Bible as the Word of God, in an attitude of loving expectancy that it will search us out and reveal God to us. Of course, once we accept that construal is an interpretive activity performed by readers in a variety of ways, there arises the pressing question of how we might evaluate these differing construals. Are we not simply back at a somewhat naive use of scripture which, experience tells us, can be just as distorting and self-legitimating as liberating or empowering?

Polk argues that the key to evaluating different construals is to read according to the ‘rule of faith’, the historic doctrine that (loosely) everything should be read as pointing to God’s love for us and our loving response. In short: yes one could read the Bible in pretty much any fashion, but this divine-human love relationship is to judge every other reading. In this way we are propelled on to the hermeneutical circle where we find the biblical text requiring this same love of us: a love which is willing, if necessary, to cover over a multitude of textual sins (from patriarchy to politics; from submission to slavery).

Polk finds in Kierkegaard’s repeated appeal to this hermeneutic a particular case of Stanley Fish’s view that it is the interpretive community which decides how a text is to be construed. But, as the repeated appeal to Kierkegaard shows, this does not render this view ‘postmodern’, as if that word meant anything. One thinks of A.K.M. Adam’s recent suggestion that ‘non-modern’ might be a helpful interim label for this kind of thinking. Polk links his proposal with Childs’ canonical approach, Lindbeck’s intratextualism (David Kelsey’s The Uses of Scripture in Recent Theology is a constant presence in the background), and the insights of speech act theory, thus providing a formidable array of approaches to set against the ‘unloving’ face of historical criticism.

Aside from its hermeneutical merit, a strength of the book lies in its repeated close engagement with particular texts, both of Kierkegaard and the Bible. The former are exemplary close readings; while the latter focus on various parables of love, as well as extended engagements with James and Job. Particularly with James, Polk demonstrates how the givenness of the text combines with the supreme importance of imaginative construal to make the Bible come alive as Word of God. Where theological hermeneutics has often attacked historical criticism on theoretical grounds but has found it harder to articulate particular instances of insight into biblical interpretation, Polk scores heavily on both counts. The Biblical Kierkegaardis a significant hermeneutical contribution which will reward those who find that the work of theology and of interpretation is all too often impersonal and loveless.