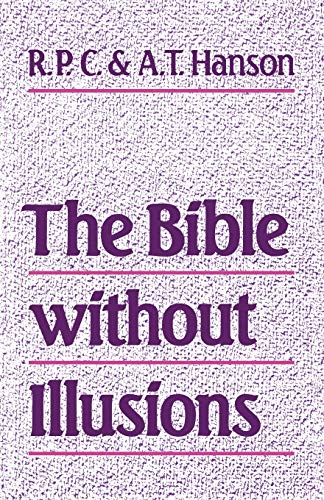 The Bible without Illusions

I found this book both stimulating and frustrating, for reasons which will become clear. The last joint project of the Hanson brothers before Richard Hanson died in 1988, it aims in a popular way to show how the Bible is to be used in the light of modern knowledge. If there is a central conviction on which the argument is based, it may be found in the judgment that the Scriptures are ‘evidence rather than oracle’ (p. 109). The Bible is not a magic book, different in kind from all other books, delivering messages of guaranteed authenticity direct from the mouth of God. It is a collection of literature bearing witness to a people’s developing awareness of the living God, which becomes sharply focused in the person of Jesus.

The authors begin by arguing that biblical criticism is an indispensable tool of honest study. Chapters 2–4 describe the manuscript tradition on which our Bible is based, and survey the interpretation of Scripture in the NT itself and in the early church. Chapters 5 and 6 argue for historical criticism and against fundamentalism. Chapter 7 discusses the nature of prophecy and the contents of the prophetic books. Chapter 8 gives a very brief outline of the content of all the other biblical books. Chapters 9–12 handle other issues which have to be faced as we apply the biblical message to our own times, e.g. Is the Bible’s world too culturally distant from ours? How do we derive doctrine from the Bible, if different parts of it speak with different voices?

There is useful material throughout, especially when the authors offer positive exposition of issues such as the nature of prophecy, the derivation of doctrine from Scripture, or the illumination which critical study has brought to our understanding of particular parts of the Bible.

But the book suffers from two defects. The first is the tendency to make unsupported assertions. The pages are littered with phrases such as, ‘If one studies honestly one will conclude …’ (p. 59). We are presented with unexplained conclusions about the historicity of Moses (p. 91), the authenticity of the Johannine Jesus (p. 94), or pseudonymous letter-writing as a recognized convention in NT times (p. 95). I recognize the difficulty of dealing with such issues in a book designed to be popular and not too long. But I do not see how such cursory treatment can be constructive for people who are not already familiar with the arguments.

Secondly, the authors are inclined to make their points in a polarized way, sometimes setting up aunt sallies to bolster their argument. When they criticize some conservative scholars for pretending to use critical methods but always coming to predetermined conservative conclusions (p. 41), why do they not comment that there are ‘liberal’ scholars guilty of a parellel crime? When rejecting conservative ideas about inspiration and inerrancy, why do they not choose to engage in constructive discussion with standard works by scholars such as J.I. Packer, I.H. Marshall, W.J. Abraham? When making the essential point that texts must be studied in their context, they illustrate it with a series of examples showing how not to do it, rather than showing positively how attention to the context will shed light on the text’s meaning.

Despite such questions about the book, readers of this journal will recognize the authors as men for whom the Bible matters. If it provokes discussion and reassessment of personal convictions, it will serve a useful purpose.