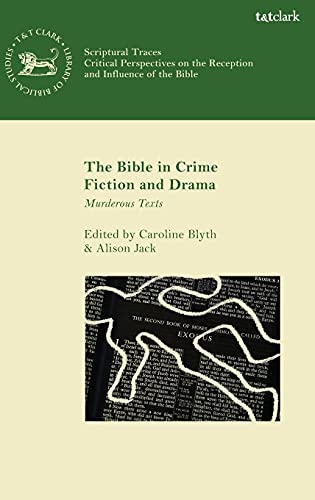 The Bible in Crime Fiction and Drama: Murderous Texts

I love crime fiction, my regular escape and, usually, lighter reading. Like others, I sometimes wonder if anyone will be left alive on the planet after so many murders in villages like Midsomer, towns like Oxford, and areas like the south of Sweden.

So, the title of this book grabbed me, less so the “drama” but much more the “crime fiction.” I am a reader, rather than a TV watcher, and only an occasional movie-goer. I assumed there would be comment on Dorothy Sayers and P. D. James, given their keenly Christian lives, but other authors were in focus in what is overall an interesting and stimulating collection of essays.

After an introduction by the editors, Matthew Collins reflects on a radio episode of The New Adventures of Sherlock Holmes from 1945 entitled “The Book of Tobit” (chapter 2, pp. 9–28). In Tobit, the demon Asmodeus kills a series of Sarah’s husbands on each wedding night; in the Sherlock Holmes story, Holmes knows Tobit but identifies the bride herself as the murderer by “marrying” her himself, and being ready for her attack. Collins then seeks to reread Tobit as crime fiction, noticing that the demon Asmodeus never appears or speaks in Tobit, and is only named by others, and thus suspicion must be cast on Sarah for the death of all the husbands on their wedding nights, possibly under demon possession. This was a stimulating essay, one of the best in the book to my mind, raising interesting interpretative questions on Tobit.

Alison Jack’s essay on Tartan Noir (chapter 3, pp. 29–40), focusing on Peter May’s Lewis Trilogy, which I have read, was likewise interesting for picking out the biblical and Christian themes and allusions. Not least, themes of the sins of the fathers and vengeance, and the bleak and rather judgmental austerity of the church and its minister, which are significant in these books. The death of one character in saving another, and being like a “parody of Christ on the cross” (p. 33) on the rocks on which he fell, is typical of a range of biblical allusions. Jack also expounds the theme of “presence” in The Chessmen, with reference to Psalm 23 at a funeral and a sense of divine, or other, presence in the novel and events (pp. 38–39). This was another standout essay in the collection.

Caroline Blyth’s chapter dealt with one of my favorite writers, Henning Mankell, the late Swedish author, a man of great personal compassion. His novel, Before the Frost, is analyzed where awful murders gradually appear to have religious connections. The detective, Wallander, fails at first to notice these and does not even identify a Bible, reflecting the biblical illiteracy of modern Sweden (p. 47). While the savage and violent crimes are religiously motivated, Mankell “is at pains to remind us that religious and biblical violence is not part of mainstream contemporary faith; rather it is a sign of faith gone wrong” (p. 56).

C. J. Sansom’s immensely popular crime series set in Tudor England, with an explicit religious background in the tussle of the English Reformation, are discussed by Susanne Bray, arguing that Sansom is making a strong point against the religious fanaticism of current times (p. 70). Ben Bixler (pp. 59–93) addresses male antiheroes in the Book of Judges evidenced in television series such as The Sopranos and Breaking Bad. I found the attempt to view Breaking Bad alongside Samson less than compelling as there do not appear to be direct links from the TV series.

James Oleson discusses the film Se7en, in which seven murders are each expressions of the seven deadly sins. Yael Klangwisan reads The Man Who Died, by Finnish author Antti Tuomainen, alongside the Book of Job. However, his key comparison and conclusion fails badly in my eyes. Klangwisan’s point is that Job and the character Jaalko both come face to face with death. But he overlooks that for Job, his key encounter is with God, not death.

Dan Clanton looks at TV sexual violence alongside Hosea 1–2 and Ezekiel 16 (pp. 126–48). His concluding sentence is that in our current times of so much violence and the #MeToo movement, we need to grapple with sexual violence texts in the Bible and “hear the voiceless victims within these texts so our ‘Divine Unsub’ (God) and the sexually violent actions he perpetrates will not be “unknown” any longer” (p. 145).

The final two chapters address Agatha Christie. Hannah Strommen argues that Poirot is a bourgeois prophet, picking up language of “calling” (pp. 153–4), forthtelling, and foretelling (p. 153) and drawing various Old Testament parallels. Finally, J. C. Bernthal looks at the hermeneutics of Agatha Christie’s later novels, arguing that after World War Two, her novels were less light-hearted and more exploratory of human nature in an uncertain age. Her detectives were less “saviour” figures and less authoritative in these later novels and indeed there was more moral ambiguity (p. 168). Both these essays were intriguing and stimulating.

Like any collection of essays, this book is a mixed bag. Our own interests will, of course, determine which essays appeal to us. I imagine there is something for most crime fiction aficionados in this book.