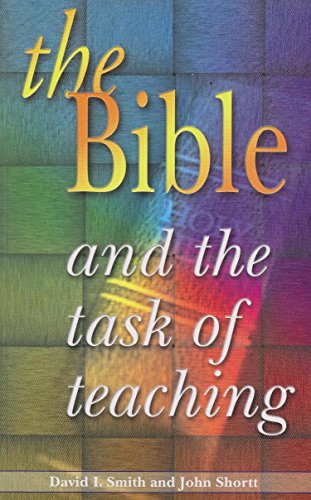 THE BIBLE AND THE TASK OF TEACHING

The Bible and the Task of Teaching is a subtler book than its title might suggest. It begins with the case made by Paul Hirst in the 1970s that there is no such thing as ‘Christian education’ because all forms of knowledge are produced from principles that are separate from Christian belief. There can be no Christian mathematics just as there can be no Islamic physics. Having outlined this early assault on educational influenced by faith, Smith and Shortt show that other relationships between the Bible and teaching fall completely outside these criticisms. While some biblical statements and principles may require education conclusions they may also allow certain beliefs and practices. They may commend some and permit others. But which sections of the Bible are relevant to these considerations? Here they argue that the relationship between the Bible and education is best seen through the application of biblical metaphors. Metaphors become guiding framewoks for producing meaning. To say that teaching is a kind of ‘gardening’ (as Comenius, drawing on Christian Scripture, did) is to create a space for the development of pedagogic theory. Smith and Shortt give an illustration of the power of metaphor: in the development of a new paintbrush with synthetic bristles, technicians were unable to make progress until they thought of the paintbrush as a pump. Once this insight had been accepted, the task was seen differently. Similarly, biblical metaphors enable teachers to re-conceive their tasks. This book shows how a new generation of creative evangelical Christians are re-thinking their approaches to the processes and content of teaching. Metaphors as well as propositions become the blocks for theory building (sorry, more unavoidable metaphors!).

This said, it needs to be made clear that the authors do not seek to prioritise metaphors over propositions. Rather they want to draw attention to the many possible starting points for Christian theory. A theory might begin with metaphor or with the canon of Scripture or with doctrinal propositions or with theological narrative or with biblical models. It is the starting point, the particular problem that needs to be solved, that will direct us to one place rather than another. Consequently no method should be seen as being the best: rather the methods need each other because their strengths and weaknesses complement each other. This book, then, opens up a big field. It shows how the Bible in general might relate to teaching in general. It brings the resources of the Bible into relationship with many kinds of teaching and many aspects of teaching. It is not about teaching the Bible itself (though this is tangentially included) nor is it about religious education in school (though this also could be re-thought following what is said here). This is an inclusive book in the sense that it shows us how the multifarious impact of the Bible in our educational culture can be re-energised and renewed. What emerges from this proposal is both flexibility of application and also reconceptualisation of basic educational concepts. For example if, following Parker Palmer, knowing is best thought of as loving, we enter a new way of teaching and learning; our worldview is renewed.

Two further points deserve comment. First, it might appear that the focus on metaphor and the admission that there are many ways the Bible can be employed might produce a random approach to educational issues. Smith and Shortt are alert to this difficulty (119). Metaphors that are consistent with biblical beliefs reflected are preferred to others.

Second, the new metaphorical method has a natural affinity with the way language shapes out perceptions of the world. The metaphorical method, or the metaphorical method in tandem with extrapolation from biblically-derived doctrinal propositions, encourages is Christian vision of learning that is intuitively grasped and cannot easily be destroyed by corrosive scepticism. The vision is; the metaphor enriches; whereas if a fundamental proposition on its own is destroyed, an entire argument fails. In this sense the new approach is much more suited to a secular post-modern world and much less vulnerable to its attacks.

This is a commendable book. It is short enough to be read quite quickly but contains profound ideas that could seep into evangelical culture and, from there, into secular culture. The simplicity of its ideas should not detract from the radical nature of their implications. I hope it will be widely used not only by teachers, (though especially by them), but also by educationalists of all kinds.

King’s College, London, and the University of Wales, Bangor