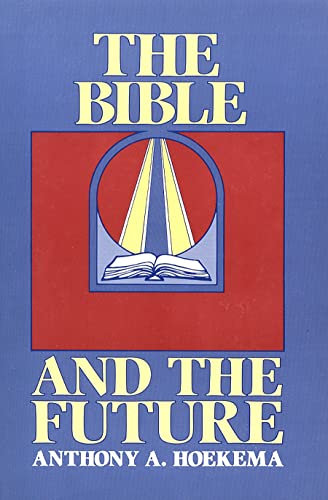 The Bible and the Future

In an era when prophecy is so popularized in an appeal to the masses, it is refreshing to find a thorough treatment of eschatology that rests securely on divine revelation rather than on current events. No popularizer of Biblical prophecy, Anthony Hoekema sets forth a thorough exegesis of God’s revealed truth that stimulates the mind and inspires the soul of the reader who looks forward eagerly to the final consummation of our Lord’s complete victory.

Hoekema’s basic presupposition is that eschatology dominates and permeates the entire message of the Bible. He begins with the expectation of the coming redeemer in Genesis 3:15 and moves to the Old Testament passages that provide hope for the kingdom of God, the new covenant, the restoration of Israel, the outpouring of the Spirit, the day of the Lord, and the new heavens and the new earth. These promises would be fulfilled, in the mind of a believer, at some future time, variously called the ‘day of the Lord’, the ‘latter days’, the ‘coming days’, or ‘at that time’.

The New Testament gives evidence that this great eschatological event predicted in the Old Testament has happened—the redeemer has come in the person of Jesus Christ. But what was once seen as one movement is now seen to involve two stages: the present age and the age of the future. The blessings experienced by believers in the present age are the pledge and guarantee of greater blessings to come when Christ returns in power and glory.

Hoekema, following the biblical evidence that the New Testament clearly speaks of a future eschatology, uses the term ‘inaugurated’ eschatology, implying that eschatology has begun but is by no means finished (p. 18).

Carefully delineating this tension between the ‘already’ and the ‘not yet’, the author easily cites Jesus and Paul, and, contrary to some others, he finds this tension also in the book of Revelation. For him, then, neither an exclusively preterist nor an exclusively futurist view of Revelation does full justice to it. This last book in the canon builds its expectations for the future on the work Christ has done in the past (1:18; 5:5–7, 9, 10; 12:1–5, 11). ‘The book of Revelation, therefore, pictures the church of Jesus Christ as saved, secure in Christ, and destined for future glory—yet as still subject to suffering and persecution while the bridegroom tarries’ (p. 69).

Hoekema, now retired from his position as Professor of Systematic Theology at Calvin Theological Seminary, finds the Second Coming of Jesus Christ to be the most important aspect of New Testament eschatology. A lively expectation of Christ’s return should mark the church today, and where this is not true, there is something radically wrong. In fact, he calls such a loss a ‘sign of a most serious spiritual malady in the church’ (p. 110).

The author handles well the various interpretations of the ‘imminence passages’ (Mk. 9:1; 13:30; Mt. 10:23, and parallels). His view of the ‘this generation shall not pass away’ passage is that Jesus means ‘the rebellious, apostate, unbelieving Jewish people, as they have revealed themselves in the past, are revealing themselves in the present, and will continue to reveal themselves in the future’ (p. 117). Hoekema stresses, however, that the main emphasis in all these passages is the certainty, not the time, of Christ’s return. He thus avoids the pitfalls into which some modern commentators have fallen.

We note the courtesy and respect with which the prophetic views of other interpreters of the Word are treated. An amillennialist, Hoekema acknowledges his appreciation, for example, of dispensational premillennialists for their adherence to the verbal inspiration and infallibility of the Bible, their vibrant hope of Christ’s return, and their insistence that in every age salvation is by grace alone. He agrees with the dispensationalist ‘in looking for a future phase of the kingdom of God which will involve the earth, in which Christ will reign and God will be all in all’ (p. 194). He then offers an eight-point critique of dispensationalism on the basis of his exegesis of Scripture, concluding that it must be rejected as a system of biblical interpretation which is not in harmony with Scripture.

Hoekema’s own view of Revelation 20:4 differs from other amillennialists, including Augustine, who interpret ezēsan as regeneration and who include believers now living on the earth in the number of those said to be living and reigning with Christ. His view is that ezēsan describes the fact that the souls of believers who have died are now living with Christ in heaven and sharing in his reign. The millennium is now, and the reign of Christ with believers during this period is not an earthly but a heavenly one’ (p. 233).

One must raise some questions, however, about Hoekema’s interpretation of Revelation 20, as, for example, his statement that 20:1 takes us back again to the beginning of the New Testament era and does not describe what follows the return of Christ. Another question has to do with his view on the binding of Satan. Satan is bound now, inasmuch as he cannot prevent the spread of the gospel to the nations of the world. Many other astute students of the Word will contend that, while the gospel is being preached in all the world, Satan is exceedingly active in every phase of society in our time, hardly what one would expect if Satan were bound. Can it truly be said that ‘the church is conquering the nations’?

A splendid treatment of recent trends in eschatology is presented in a 29-page essay in the appendix. Three indexes of subject, authors and Scriptures make this volume a tremendously helpful tool to any Bible student. Dr Hoekema has made a valuable contribution to the study of biblical eschatology. This book will make a first-rate text for college and seminary students and is a storehouse of exegetical knowledge for students of the Word who base their views on divine revelation rather than on popular trends. To read this volume is to have a greater appreciation for revealed truth and to experience a more compelling hope for the consummation of our redemption in the return of Jesus Christ.