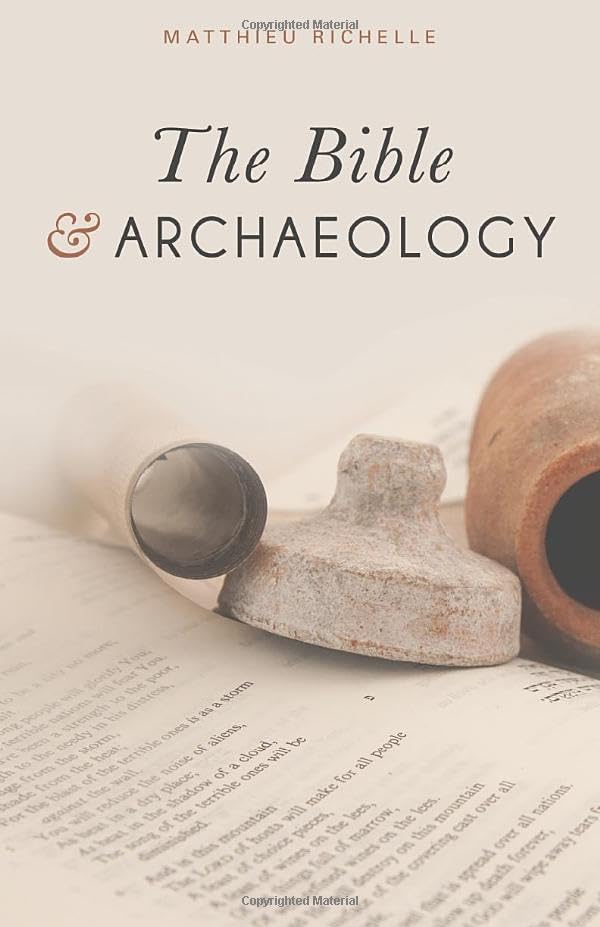 The Bible and Archaeology

Richelle’s simple and uncomplicated volume will not disappoint the reader who is seeking “to develop a balanced conception of the links between … the study of the Bible and the study of archaeological discoveries” (p. 2). This readable introduction is neither sensationalist in its claims nor dismissive in its assertions. Although written by an authority in the fields of archaeology and epigraphy and a professor of Old Testament at the Faculté Libre de Théologie Évangélique in France, this book is accessible for a wide audience.

Richelle takes a studied approach highlighting the limitations of the partial witness to history in both the Bible and archaeological evidence. He delineates his purpose: “to help the reader discover successively the riches of information that archaeology provides, the limits inherent to this knowledge, and the manner in which we should compare it to the Bible” (p. 107). This objective is supported by the first three chapters and is realized in the fourth chapter. Chapters 5 and 6 then apply Richelle’s conclusions to the ongoing debate surrounding the time period of the United Monarchy of David and Solomon.

Chapters 1–2 explain the process of uncovering the artefacts that, when rightly interpreted, provide clues to the nature of life in ancient Israel. This material witness is elucidated greatly when inscriptions are found at an excavation site. Chapter 3 outlines limits that should constrain attempts to draw dogmatic conclusions from the material witness. Consequently, Richelle poses the question as to the nature of the relationship between the Bible and archaeology in chapter 4. This is the heart of the book.

Richelle explains six different perspectives on this relationship and identifies advocates of each (pp. 61–71). His evaluation of the relative strengths and weaknesses of these methodologies leads him to propose a “balanced approach” (p. 71) which should be employed with “intellectual honesty” resulting in a “high standard of work” (p. 72). He maintains that the Bible should not unduly influence archaeologists during the excavation but that it could help guide the interpretation during the historical reflection (p. 71). He provides an excerpt of a portion of the final report from the Beersheba excavations to demonstrate this approach (see Ze’ev Herzog and Lily Singer-Avitz, eds., Beer-Sheba III [Winona Lake, IN: Eisenbrauns, 2016], 1478).

Richelle follows with a discussion of the credibility of the biblical accounts as historical sources. He cautiously affirms that if the “archaeologist’s analyses [are] subject to the judgment and verification of … professional peers,” then the Bible can be a useful tool (p. 74). The chapter closes with a discussion of the types of correlations (or lack thereof) between the biblical witness and archaeological discoveries. He maintains that these two disciplines should be employed with a degree of humility, recognizing that both are dependent upon interpretation of their respective evidence and that their data remain incomplete.

Chapters 5 and 6 then apply Richelle’s proposal to the lack of consensus on the existence and extent of the kingdoms of David and Solomon. Chapter 5 considers the various claims made from the archaeological (material) evidence discovered in Jerusalem, Gezer, Hazor, and Megiddo. Chapter 6 addresses the debate surrounding the development of literary activity in tenth and ninth century BC Jerusalem and Judah. While recognizing the paucity of epigraphic discoveries from this time period, Richelle prudently builds an argument for significant literary activity in this time period (pp. 101–4).

After the brief conclusion, Richelle provides bibliographic resources to the interested non-specialist for further exploration (pp. 109–11). The following twenty pages of endnotes document the sources used and demonstrate the author’s familiarity with the issues raised. Thirty-one full-color figures, referenced in the first two chapters, conclude this book.

Richelle’s book is neither polemical nor positivistic. The conversation is informative and reasoned. The book presents an invitation for the extreme elements in the sometimes-opposing camps to reconsider the tone of the debates and to begin a more productive dialogue that humbly recognizes the limits of knowledge in the respective disciplines (p. 71). At times the reader may sense that Richelle prioritizes the biblical record over the archaeological evidence (see his discussion of the Tel Dan Stela in light of 2 Kings 8, pp. 31–32). At other times he cautions against “invasive” biblical exegesis (p. 72; cf. the danger of creating circular arguments [p. 64] and the exhortation against letting the “reading of the Bible interfere” during the period of excavation and interpretation of the material evidence [p. 71]).

Richelle’s book fills a unique niche in the market. This is not a handbook on archaeology or an introduction to the discipline. Nor does it follow David Graves’s methodology of offering a selection of archaeological prooftexts that “demonstrate the historical reliability of the people and events of the Bible” (Biblical Archaeology: An Introduction [Toronto: Electronic Christian Media, 2017], xxx; see also Kenneth Kitchen, On the Reliability of the Old Testament [Grand Rapids: Eerdmans, 2003]). The tone of the book does not provide an apologetic against the historical minimalists as is the case with William Dever’s What Did the Biblical Writers Know and When Did They Know It? (Grand Rapids: Eerdmans, 2001). Additionally, it makes no attempt to serve as an illustrated archaeological guide to the history of the OT like J. Randall Price and H. Wayne House’s Zondervan Handbook of Biblical Archaeology: A Book by Book Guide to Archaeological Discoveries Related to the Bible (Grand Rapids: Zondervan, 2017).

This book would serve the interested layperson or pastor who desires to understand the relationship between the Bible and archaeology, especially when sensational claims are made that call into question the reliability of the biblical witness to ancient history. Moreover, it provides wise counsel to the unduly positivist Christian who needs to recognize that the Bible’s theologically-focused purpose may have determined its selective use of history. The resulting “gaps” in the historical record may very well be supplemented by the archaeological evidence discovered. This book would also benefit students at Bible colleges and seminaries, where it could serve as a supplementary text for classes on Old Testament introduction and biblical archaeology.