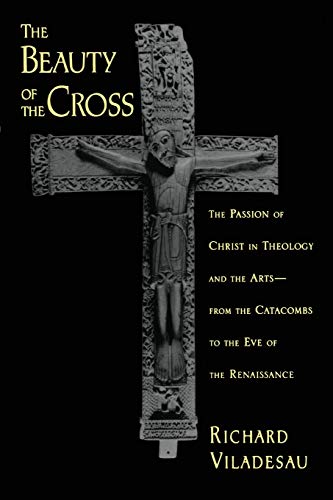 The Beauty of the Cross: The Passion of Christ in Theology and the Arts from the Catacombs to the Eve of the Renaissance

In an age with no shortage of books on the doctrine of the atonement, Richard Viladesau’s Beauty of the Crossmakes a unique and profitable contribution. Viladesau sets out to demonstrate the beauty of the cross as it developed in both theology and art from the NT to the eve of the Renaissance. This interdisciplinary project includes historical and aesthetic theology, but is primarily systematic and aims to provide necessary background for a proper contemporary theology of the cross.

While the NT offers many “images” for Christ’s work on the cross, the early church portrayed the cross primarily as the instrument of God’s triumph. Early artists did not depict “what actually happened” in the crucifixion but rather conveyed the spiritual reality seen through eyes of faith. The passion was seen within the framework of the incarnation and therefore stressed the divinity of Christ as the source of his victory over death and evil. The crucified Christ is not dead or even suffering, but rather alive and triumphant, often with eyes open and a golden crown or halo on his head. As it says in the sixth-century hymn Vexilla Regis, “God has reigned from a tree” (p. 38).

Victory would remain the key theme for conceptual and aesthetic mediations of the cross from the early church until the early Middle Ages. Christ’s triumph on the cross, however, would eventually come to be understood within an Augustinian framework and ultimately be transformed by Anselm. Although it was common by the tenth century for Christ to be depicted dead on the cross, Anselm’s emphasis on the satisfaction of God’s honor shifted the focus entirely away from Christ’s divine victory on the cross to his human suffering and death. Furthermore, Abelard’s response to Anselm, which emphasized the subjective aspects of the cross, furthered the shift towards a more human understanding of Christ on the cross, clearly evident in the Romanesque art of the time.

Thirteenth century scholasticism and gothic art made widespread what had been faintly present from the tenth century onward: the suffering humanity of Christ in the crucifixion. Theologians such as Lombard and Aquinas attempted to uphold both objective and subjective aspects of the cross, but a clear shift away from the juridical metaphor towards a metaphysical notion of enabling grace furthered the previous emphasis on the humanity of Christ on the cross.

The fourteenth century, which marked the end of the Middle Ages and the beginning of the age of modernity, brought to fullness the growing emphasis on the natural portrayal of the crucifixion, focusing primarily on the suffering humanity of Jesus. Giotto’s crucifixion fresco, for example, depicts the man on the cross as dead, body drooping, head hanging low, and no crown of thorns upon it. The realism extends even to those below the cross, Mary and John, who are overcome with sorrow. While Viladesau recognizes the diversity of atonement theologies throughout the history of the church and does not give in to generalizations, he successfully shows a gradual shift in emphasis from the divine victory of Christ on the cross in the early church to the human suffering of Christ on the cross in the late Middle Ages.

Viladesau’s work has several strengths. First, his inter-disciplinary approach offers a fresh perspective to a discussion often marked by redundancy. Viladesau’s distinct method helps one accurately understand the history of the doctrine of the atonement as well as provide a fuller meaning of the beauty of Christ’s work on the cross. Second, Viladesau not only clearly identifies the major historical landmarks of the development of the doctrine of the atonement, but most saliently articulates the progression of thought from one stage of development to the next.

A weakness of the book comes only in holding Viladesau to his own aim of contributing primarily to systematic theology over historic or aesthetic theology (p. viii). Although an accurate historical understanding is helpful to systematic theology, Viladesau could have been more explicit regarding how these different images of the cross relate to one another, whether they are more or less faithful to Scripture, or how they contribute to a contemporary theology of the cross.

Jeremy Treat is pastor for preaching and vision at Reality LA in Los Angeles and adjunct professor of theology at Biola University.