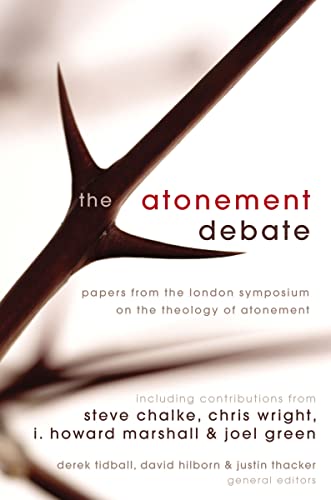 The Atonement Debate: Papers from the London Symposium on the Theology of Atonement

Do traditional evangelical interpretations of the death of Christ on a Roman cross portray God as a divine child-abuser wherein God the Father brutally punishes his Son in the place of sinners? Does the penal substitutionary theory of the atonement, viewed by many evangelicals as central to the message of the gospel, in reality portray God as vindictive and interested only in retribution against his creatures? These questions are just representative of some of the issues currently being raised in relation to the penal substitutionary view of the atonement. What might be surprising to some within the evangelical community is that these and other similar charges have recently arisen from within evangelicalism itself. The Atonement Debate is a collection of papers devoted to discussion of just such issues related to the nature of the atonement and recent criticisms of penal substitution.

The background to the publication of this volume is helpful for understanding its purpose. In 2003, Steve Chalke and Alan Mann coauthored a volume entitled The Lost Message of Jesus (Zondervan). In this work Chalke and Mann offer several critiques of the penal substitutionary theory of the atonement. Both men also further elaborate their positions in subsequent publications. Their views created concern within the Evangelical Alliance (UK) over the question of their adherence to the Alliance’s statement of faith. In July 2005, a symposium, co-sponsored by the Evangelical Alliance and the London School of Theology, was held—not to pass judgment on the “orthodoxy” of those critical of the penal substitutionary view of the atonement, but rather to provide an avenue for discussion of the various issues that have arisen surrounding the nature of the atonement. The Atonement Debate brings to the larger evangelical community the papers that were presented at this symposium as well as a few papers that were not able to be presented at the time of the meeting.

While Scholars from both sides of the debate are represented, those favorable to the traditional penal substitutionary theory outnumber those critical of penal substitution. Several well known scholars are represented, including I. Howard Marshall and Anthony N. S. Lane, both of whom write in support of penal substitution and in favor of some of the more controversial issues related to the theory, including Christ’s bearing the punishment for sin in the place of sinners. Those critical of penal substitution include Steve Chalke and Joel B. Green. Green has also previously called for a reappraisal of our understanding of the atonement in Recovering the Scandal of the Cross: Atonement in New Testament and Contemporary Contexts (with Mark D. Baker; Downers Grove: IVP, 2000).

While it would be impossible in a review of this length to provide a summary of all the articles in The Atonement Debate, some general observations can be made. Recent criticism of penal substitution has had some positive effects even among adherents of this theory. Supporters of penal substitution have taken the time to clarify and refine their positions and have agreed that there has at times been some unfortunate language used to describe the atonement. There is general agreement, for example, that statements portraying the Father as being angry with the Son are nowhere supported in Scripture. While this type of language is sometimes heard from the pulpit, it does not accurately reflect a careful presentation of the penal substitutionary theory of the atonement. However, the critics of penal substitution do not stop at criticizing some of the unfortunate portrayals of this theory. They go on to claim that penal substitution is deeply flawed at its very core. One recurring criticism of penal substitution is that it rests upon the assumption that God is not free to forgive sins unless His wrath has first been satisfied. This, it is claimed, contradicts God’s own requirement that His human creatures forgive those who sin against them without first demanding any sort of restitution before forgiveness is offered. As Steve Chalke writes, “If the cross has anything to do with penal substitution, then Jesus’ teaching becomes a divine case of ‘do as I say, not as I do’ ” (p. 40). Other common criticisms include the claim that penal substitution emphasizes God’s wrath at the expense of God’s love (pp. 40, 159–64), and that penal substitution is based on an individualistic and decidedly Western understanding of justice more than it is on Scripture (pp. 164–66).

The Atonement Debate serves as a helpful introduction to the current discussion within evangelicalism over the nature of the atonement. Both sides of the debate are well represented even considering that there is more space devoted to the pro-penal substitution view. That being said, it is unlikely, in the opinion of this writer, that someone reading this volume will be convinced to jettison penal substitution. As I. Howard Marshall clearly points out in chapter three, the New Testament teaching is that all those who do not trust in Christ have a sure and certain future. That future is variously described as receiving God’s wrath or God’s judgment and ultimately results in eternal separation from God. As Marshall correctly observes, the New Testament is unanimous in its teaching that our salvation is the deliverance from this future judgment. That Christ’s work on the cross removes the judgment of sin from the sinner seems to be an inescapable element in the Bible’s teaching on the atonement. This certainly describes the heart of the penal substitutionary theory of the atonement.