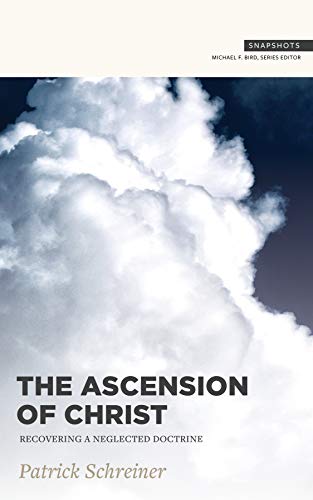 Christ’s ascension rarely receives significant theological attention, at least among many evangelicals. Patrick Schreiner, associate professor of New Testament and biblical theology at Midwestern Baptist Theological Seminary, seeks to remedy this problem with his Ascension of Christ. Schreiner aims for his work to “help people think through this piece of the Jesus event and impress its importance” (p. xv).

The ascension refers to “Jesus going up from earth into heaven” (p. xv), as described in such biblical texts as Luke 24:50–53 and Acts 1:9–11. Schreiner links the ascension event with the session, Christ’s sitting in glory at the right hand of the Father. Though these two concepts are not synonymous, Schreiner presents them as “a singular script” because, for the resurrected Christ, “the ascent is the journey, while the sitting is the goal” (p. xv).

Schreiner considers the ascension through Christ’s work as prophet, priest, and king. Schreiner employs this threefold delineation of the Messianic office—the so-called munus triplex—to great effect. The framing allows him to explain how Christ’s work connects with key Old Testament vocations, and how Christ continues his tri-fold work through his exaltation and triumph.

The book’s structure follows the munus triplex pattern, with individual chapters devoted to exploring Christ as prophet, priest, and king. In each chapter, Schreiner surveys significant Old Testament antecedents. Leaders such as Moses represent the prophetic office. Monarchs such as David represent the kingly office. Old Testament prescriptions related to the priesthood represent the priestly office. Schreiner then argues that in the Old Testament, these three offices remain incomplete. The occasional failings of the occupants who held these offices and the ineffectual nature that these offices had under the Old Covenant are to blame. Christ, however, perfectly realizes the expectations and obligations related to these offices—and he does so not just in his earthly work but also in his ascension and session.

As the ascended prophet, Christ sends his Spirit to his church, teaching his people and convicting them of wrongdoing. As the priest seated in the heavens, Christ intercedes for his people and presents his sacrificial work on their behalf. As the authoritative ruler at the Father’s right hand, Christ occupies a place of prominence and authority, dispensing his church to represent his name on the earth.

This material proves rich, demonstrating the value that Schreiner’s attention to the munus triplex brings. Many presentations of Christ’s work tend to “flatten or compress” his ministry to the timespan of his earthly life (p. 68). Focusing on the threefold work of Christ, specifically how that work finds its completion only in the ascension, discloses the more expansive theological import of the doctrine.

Attention to the threefold work of Christ also differentiates Schreiner’s work from similar projects. Peter Orr’s recent Exalted Above the Heavens (London: Apollos, 2018) is an excellent volume that surveys biblical and theological themes related to the ascension; however, Schreiner’s text at points more profoundly conveys the ascension’s theological significance because of its robust focus on the munus triplex. Readers interested in the ascension may wish to read the two volumes together, relying on Orr’s work to discover some biblical data not fully addressed by Schreiner—and then turning to Schreiner’s book to explore the pertinent theological material.

Despite its strengths, a few minor issues with Schreiner’s work merit comment. At times, his language suffers from ambiguity. Stating that Christ’s prophetic, priestly, and kingly roles “took place” in the pactum salutis (covenant of redemption) suggests the sort of covenant theology prominent among such figures as John Gill or Joseph Hussey (p. 47). A more typical construction would portray these roles as originating in the pactum salutis but as not obtaining full actualization—that is, as not “taking place”—until Christ actually performs his ministerial works. Also, Schreiner’s comments about Jesus’s ascended body no longer existing in our current space and time are not incorrect but do merit some additional explanatory remarks. Finally, Schreiner’s exposition of Christ’s continuing priestly ministry would benefit from interaction with the writings of David Moffitt.

Despite some minor weaknesses in The Ascension of Christ, pastors and church leaders will benefit from this clearly written, accessible and biblically faithful exposition of Christ as prophet, priest, and king—and, crucially, from Schreiner’s rich explanation of Christ’s ascension in relation to these roles.