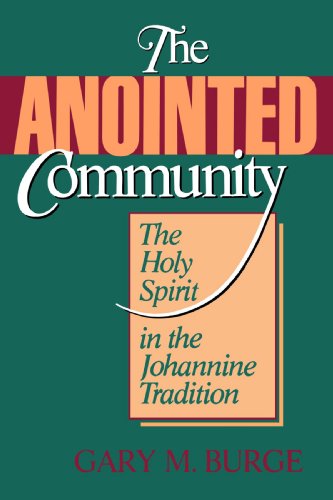 The Anointed Community. The Holy Spirit in the Johannine Tradition

As the extensive footnoting in this book bears witness, it began life as Dr Burge’s doctoral thesis (Aberdeen University). It is, in fact, a thorough investigation of Johannine pneumatology. Unlike some other major studies in this area, this latest offering is not restricted to a study of the Paraclete. It ranges more widely, examining the concept of the Holy Spirit in all its breadth. Although there is some reference to the Johannine epistles, Burge concentrates mainly on the Gospel of John. Since matters of general introduction do not impinge upon the main discussion they are not treated as such in this book. One significant stance is taken, however, based on the trend of recent research in this area: the existence of a Johannine community is assumed. Moreover, this community, it is maintained, furnishes the Sitz im Leben of the Gospel. Hence the title The AnointedCommunity. It is fair to say that the position adopted does not substantially influence the work as a whole, since it remains primarily a study of pneumatology in John; it avoids elaborate speculation concerning the practices of the community. For the most part, the author is careful to exegete the text first, and only then to consider how it might have applied to the life of the community. He thereby avoids the excesses into which others who have reversed the process have fallen. The constant—and in my view correct—emphasis on Christ as the pneumatic precursor, the spirit-anointed one par excellence, who both paves the way and provides the model for the community’s own experience, helps to ensure that speculation does not become the master of interpretation.

Any major study on John must face the awesome task of getting to grips with the mass of secondary literature on John’s Gospel. Burge displays an impressive grasp of that literature, and he interacts well with it. Nowhere is this more evident than in his opening section. This constitutes a concise survey of previous studies on Johannine pneumatology. It usefully sets the agenda for what follows, as well as familiarizing the reader with the main issues of debate within this field. In line with the current tendency to lay stress on the Jewish background of this Gospel, Burge shows that the OT and inter-testamental Judaism offer by far the most ‘persuasive’ parallels for the Johannine Spirit Paraclete (contra Bauer, Bultmann). Yet, he claims, this traditional image has undergone a process of adaptation in the Fourth Gospel, revolving around two foci: Christology/eschatology and revelation. Furthermore, the latter merges into the former such that Johannine pneumatology has for Burge a thoroughly christocentric basis. This he affirms repeatedly.

The main body of the book is a study of the Holy Spirit in John in relation to a number of other major themes. Thus there are successive chapters on Christology, eschatology, the sacraments, and witness (mission and anamnesis). The relevant data is well covered, and the material is helpfully set out with good use of headings and the inclusion of a number of tables and charts.

The Anointed Community is a solid piece of work, based on careful exegesis of the relevant texts. As a thorough examination of the role of the Spirit in John, both in relation to Christ and to his followers (the Johannine community, according to Burge), it will surely take its place as a major contribution in its field. At the same time, the preface informs us that the impetus for this study came from the author’s own questions concerning the place of the Spirit in Christian experience and the extent to which the NT provides a model for that experience. He believes that John provides a balanced view of the Spirit, and a number of interesting observations in this vein are offered in the course of the book. This is a book that contains useful and original insights, whilst touching on many issues that lie beyond the scope of Johannine pneumatology. It is far from being light reading, but any effort expended is certain to bring its rewards.

It is but rarely that one finds a book with which one wholly agrees, and this is not, for me, such a book. Detailed interaction is not possible here, but, to give just one example, I am not convinced by the relevant discussion that John 20:22 is not intended to be symbolic. Burge dismisses the view that it is symbolic rather than producing cogent arguments against it. Notwithstanding such disagreements, largely on points of detail, I have nevertheless found the book both stimulating and illuminating. Dr Burge has provided us with a most capable and worthwhile guide to Johannine pneumatology, one which deals both with the issues and with their implications for the church today.