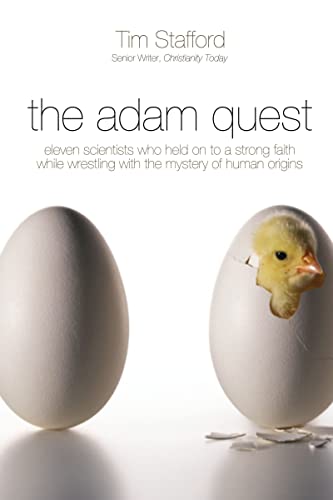 The Adam Quest: Eleven Scientists Who Held on to a Strong Faith While Wrestling with the Mystery of Human Origins

Tim Stafford’s latest book The Adam Quest presents brief profiles of eleven scientists who also happen to be Christians. Most of them have some public notoriety in the creation/evolution debate, and they represent different views on the subject. To be clear, I am one of the eleven scientists profiled, and I am personally acquainted with three of the others (Kurt Wise, Georgia Purdom, and Darrel Falk). Though I am not a neutral reviewer, I think my personal involvement gives me some deeper insights on the book.

As an anthology of biographies, Adam Quest does not lend itself to simple summary, but it does raise the typical questions that all anthologies do. Why these eleven people? Why not someone else? Why present certain details and not others? Is there a narrative or thematic thread running through the stories? Is there some message in the collection?

In response to the last question, Stafford opens the book with two anecdotes about Christians who have had difficult times reconciling creation and evolution, not to themselves but to their Christian friends. For Christians interested in pursuing science as a career, there is a personal price to be paid. As with any contentious subject, animosity and alienation await those who take an unpopular position. Surely this is not the way Christians ought to be? On matters essential to the faith, we can be dogmatic, but on other issues, why do we scorn those who disagree? If God’s grace through Christ can cover all our sin, surely it can cover mistaken beliefs about creation?

As we already know, that’s now how the creation debate has evolved. Each side has become deeply entrenched behind sometimes bitter rhetoric about the “other side.” It is common for one prominent activist to accuse another of damaging the Gospel or undermining the credibility of the faith. People cannot even stand on the sidelines easily without someone demanding they declare their allegiance to the “right” side.

The message of Adam Quest calls us to humanize this debate. Ideas about creation and evolution are not mere abstractions. They are the thoughts and convictions of real people. More importantly, we can recognize faithful Christians on all sides of the debate, not just the side we happen to occupy. When we lose sight of the personal aspect of the debate, we run the risk of dividing the body of Christ. In short, once you get to know someone you disagree with, it becomes harder to shrug them off as a stereotype.

In this context of personalizing the debate, Adam Quest presents snippets of the life stories of its subjects, many of whom would strongly disagree with each other about God’s mechanism of creation. The subjects of these stories are presented with little editorial commentary, which leads to some interesting contrasts. In describing Intelligent Design (ID) advocate Michael Behe, Stafford writes approvingly of his book Edge of Evolution, but in Darrel Falk’s chapter, Behe’s book is portrayed as a failure. Readers looking for clarity (is Edge of Evolution good or not?) should find a different book. The Adam Quest wants us to encounter Behe and Falk personally rather than rushing to judge their beliefs.

In the final chapter, Stafford tries to tie the disparate stories together and to emphasize again his goal of personalizing the culture war. The final chapter also exposed Stafford’s own bias and ultimately undermined his message, leaving readers either delighted or disappointed, depending on whether or not they accept Stafford’s personal belief in evolutionary creation.

Over the past few years, I have been privileged to get to know Darrel Falk, another of the scientists profiled in Adam Quest. Darrel is an ardent evolutionary creationist, and I am a fully committed young-age creationist. In our conversations, there have been tense moments, as we each confront not just a strawman argument but a fellow brother in Christ. One of the most important things I gained from our conversations is change. I cannot easily dismiss evangelical evolutionists any more. Even though I continue to believe that young-age creationism is true and that it is very important that Christians believe it, I now find myself struggling to articulate these beliefs in ways that are not needlessly offensive to Darrel. Such thoughts would never have occurred to me five years ago. Now, things are different. I have been changed by our shared relationship in Christ.

Even though Stafford advocates personalizing the debate as Darrel and I are doing, I do not sense the same sort of change in Stafford that I have experienced. Instead, Stafford judges young-age creationism with the same smug, dismissive attitude as most evolutionary creationists. Young-age creationism “presents a stark choice: you can uphold a traditional belief in the literal, historical reading of Genesis, but only at the cost of rejecting mainstream science. Yes, you can become a creation scientist, but there really isn’t much science there: no labs, no experiments. The only career in science you can aspire to is teaching about creation science” (p. 204). I find it difficult to reconcile this passage with his previous lavish praise of the subjects of his book. “How can you dismiss any of them? Are any of them not scientifically competent?” (p. 200). How could someone who rejects science be a “competent scientist?”

ID gets the poorest treatment of all. To describe them, Stafford uses the derogatory term “intelligent design creationists,” a phrase used by the enemies of ID to marginalize them as religious nuts. Stafford could not have chosen a more insulting label. In the ID section, he relates the stories Michael Behe and Fazale Rana. Behe certainly belongs in the world of ID, but Rana has been openly critical of ID, while still using the language of design. He’s hardly an ID advocate, not in the larger political sense of ID. In truth, Rana belongs in the world of progressive creationism, but that position, though popular, is completely ignored.

The message of Adam Quest is certainly one of tolerance and mutual understanding. Stafford wants creationists of all convictions to tolerate and understand Christian evolutionists. If you like that message, you will probably like Adam Quest and its conclusions. If like me, you think that mutual understanding ought to be mutual, this book will disappoint. Given his condescension, I sense that Stafford never really understood his non-evolutionist subjects at all.

I also desire a more civil and Christian debate, but Adam Quest is a missed opportunity to show us just what a Christian take on the creation/evolution debate should look like. I will continue to hope that such an example is forthcoming. Maybe it’s just around the corner.