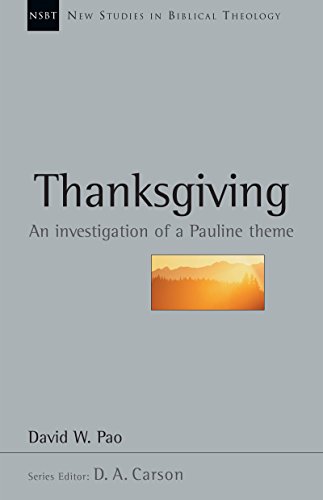 THANKSGIVING: AN INVESTIGATION OF A PAULINE THEME, NSBT 13

This is Number 13 of the ‘New Studies in Biblical Theology’, edited by Don Carson. Several volumes in this useful series are being published each year and I suggest that students should become aware of those already published and keep abreast of future publishing developments.

You need to look at the actual books, not just a list of them, for the precise theological area with which each deals is not always immediately evident from their titles, although this is obviously not the case with this one.

David Pao believes his chosen theme has been neglected and that only certain aspects of it have been given the study they deserve. This fine volume seeks to remedy this and it is hoped that it will encourage others to explore this important and profitable topic. It is truly a study in Biblical Theology, and the Pauline theme is related very fully to the OT, especially the Book of Psalms and other OT poetical material.

Chapter 1 deals mostly with matters of terminology, and the author handles particularly the relationship between thanksgiving, praise and giving glory. Chapter 2 shows that the grounds of thanksgiving are the acts of God which evoke faithful response to the experience of God’s grace. It explores thanksgiving within the covenantal tradition, demonstrating that it relates to the past, the present and the future. This then becomes a structure shaping the remaining chapters in the book, although the writer stresses that, in Paul’s thought, the three are closely connected.

In Chapter 3, thanksgiving is viewed as remembrance and it is clear that thanksgiving and proclamation of the acts of God are united, as we see in Paul’s comments on the Lord’s Supper, which focuses on Christ’s death in which the OT covenant promises were fulfilled.

Chapter 4 is particularly rich and it deals with the Christian life as a life of thanksgiving. The importance of the theme for Colossians becomes very clear but the exploration of it in the Pauline epistles is broad, with a strong emphasis on the link between thanksgiving and the lordship of Christ. In Chapter 5, David Pao shows that the eschatological songs of the OT emphasis the faithfulness of God, which forms the basis of the people’s confidence concerning the future and therefore of their thanksgiving. This is true also for Paul. The final chapter is about ingratitude, a major ingredient in human sin.

The book at once reveals that this study of a theological topic is grounded on first-class exegesis, and yet at the same time it is a heart-warming volume. Don Carson rightly says:

His study is not only the stuff of biblical theology and grist for many sermons, but will prove to be the occasion for self-examination, repentance and a new resolve to be thankful.

This is true, and it demonstrates clearly how profitable Biblical Theology is for all the practical disciplines of Christian life and work and how important it is that it should never again suffer neglect.