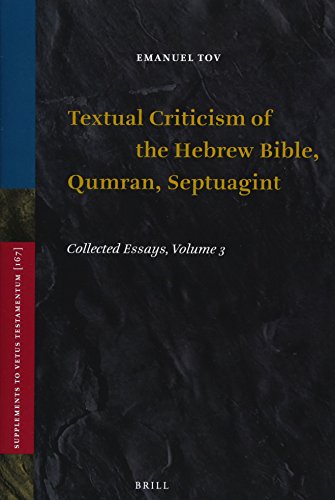 Progress in textual criticism is cumulative—we stand on the shoulders of giants. This collection of erudite essays demonstrates just that. Emanuel Tov is professor emeritus at the Hebrew University of Jerusalem and author of such groundbreaking works as Textual Criticism of the Hebrew Bible, 3rd ed. (Minneapolis: Fortress, 2011).

This book, the third volume of his collected writings (volumes 1–2 were published in 1999 and 2008), is a compilation of thirty-three revised and updated articles written by Tov between 2008 and 2014. His treatments of textual criticism fall into three major areas: (1) Hebrew Bible, (2) Qumran, and (3) Septuagint. These sections contain 18, 9, and 6 essays, respectively.

Readers of this journal might be especially interested to get the author’s take on the textual diversity of authoritative collections (ch. 2), the concept of consistency in the world of ancient scribes and translators (ch. 3), the diffusion of biblical manuscripts (ch. 5), computer-assisted tools for textual criticism (ch. 7), the close of the Discoveries in the Judaean Desert, 40 vols. (Oxford: Clarendon, 1955–2009) publication project (ch. 20), and the Septuagint between Judaism and Christianity (ch. 30). All of these studies, as well as the others not mentioned above, have many implications for surrounding disciplines. Limited by space considerations, however, only two examples will be highlighted here.

One area that would be pertinent to other fields, especially NT studies, would be the diffusion of biblical manuscripts in antiquity. In his essay on this topic, Tov states, “The peak years of scroll production, at least for those found at Qumran, were between 100 BCE and 50 CE, again in ever-increasing numbers” (p. 61). While Tov acknowledges that the available evidence is limited and such approximations are still speculative, these do not lead him to the conclusion that biblical manuscripts were rare or inaccessible. For example, he cogently maintains, “There is no solid evidence in favor of the idea that in early centuries there were very few or no copies of the biblical books in the private domain and that such copies were found only in the Temple” (p. 73). At the same time, his attempt to better estimate the number of scrolls circulating in antiquity is unnecessarily impeded by some of his stated assumptions, such as when he says, “In early centuries, the literacy rate was very low, and this assumption makes it unlikely that there would have been more than a few copies of the biblical books among the public in those centuries” (p. 74, italics added). For a brief survey of problems associated with such widely held scholarly assumptions about ancient literacy, see my article, “Ancient Literacy in New Testament Research: Incorporating A Few More Lines of Enquiry,” TJ 36 (2015): 161–89.

The second example included here is more philosophical in nature than many other chapters, as Tov himself acknowledges. While analyzing the milieu of ancient biblical scribes and translators, he argues, “I suggest that consistency was not part of their world.… The absence of consistency did not disturb the ancients, since the aspiration for consistency is an invention of later centuries” (p. 36). He goes on to conclude that “the ancients did not strive for consistency” (p. 44). But the ancients were not so categorical, as can be seen in the writings of Strabo, the Greek historian and geographer (ca. 64/63 BCE–24 CE) who laments at length regarding the inconsistency of what ancients wrote and even how they spelled. In fact, Strabo devotes a long section in one of his writings to textual inconsistencies and his desire for more consistency. Three brief citations from Strabo will need to suffice.

Strabo writes, “Some change the text and make it read ‘Alazones’, others ‘Araazones’, and for the words ‘from Alybê’ they read ‘from Alopê’, or ‘from Alobê.’” He then states, “[Ephorus’] change of the text, with innovations so contrary to the evidence of the early manuscripts, looks like rashness.” Still later he explains, “One should spell the name with two l’s he says, but on account of the metre the poet spells it with only one… How, then, can the opinions of these men deserve approval? … [T]hese men also disturb the early text … some things are arbitrarily inserted in the text” (Geog. 12.1 LCL 211:404–9).

None of these counterexamples from Strabo should mute the more general warning bell that Tov sounds, namely, that the concept of consistency does not apply equally to every kind of literary activity. But a compelling case can be made in the opposite direction of his unqualified assertions above that many ancients in the world of the biblical writers, scribes, and translators did care about consistency, and the aspiration for consistency was not merely an invention of later centuries. This conclusion has obvious implications for the doctrine of Scripture, not just the field of textual criticism.

In any case, Tov’s remarkable collection is packed with meticulous research and a wealth of knowledge. He has provided an elegant account for students and a plethora of knowledge for scholars, demonstrating again that when it comes to the vast domain of textual criticism, we can never know too much.