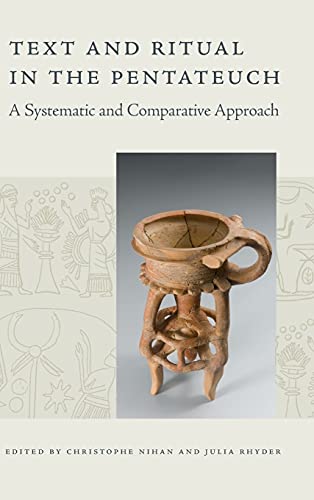 Text and Ritual in the Pentateuch: A Systematic and Comparative Approach

Recent years have seen an increased focus on biblical ritual texts. This is due, in part, to the advent of ritual studies as a discrete discipline in the 1970s and 1980s. One of the key questions to emerge is how interpreters ought to construe the relationship between ritual text and ritual practice. James Watts’s observation has, for many, become axiomatic: “texts are not rituals and rituals are not texts” (Ritual and Rhetoric in Leviticus: From Sacrifice to Scripture [Cambridge: Cambridge University Press, 2007], 29 [emphasis removed]). Within this conception, ritual texts are not straightforwardly prescriptive or descriptive. Instead, as literary entities, ritual texts encode persuasive ends. The resulting relationship between text and practice is correspondingly multifaceted and non-linear. The thirteen essays in Text and Ritual in the Pentateuch, edited by Christophe Nihan (University of Münster) and Julia Rhyder (Harvard University), are a timely engagement with this complex field. The approach taken is explicitly comparative: to situate ancient Israel/early Judaism alongside other ritual cultures of the Mediterranean and West Asian worlds with the aim of opening new perspectives on ritual and ritual texts in the Hebrew Bible (p. 1).

The introduction by Christophe Nihan states the assumed position of contributors: “the performance of a ritual and its textual representation are not one and the same thing” (p. 2). This, in turn, raises two crucial questions that the volume explores: (1) how close are ritual texts to performance? and (2) what is the function of textualized ritual? (p. 3). Readers are encouraged to not only consider what ritual texts say but also how they were used in relation to ritual performance (p. 6). Nihan helpfully distills four implications this volume has for future scholarship: demonstrating the relevance of comparative approaches, the need for more complex models, the importance of material culture, and the integration of biblical and early Jewish ritual studies (pp. 22–27).

Five essays examine the relationship between ritual and text in Egyptian (Giuseppina Lenzo), Greek (Dominique Jaillard), Neo-Assyrian (Lionel Marti), Syrian (Patrick Michel), and Hittite (Yitzhaq Feder) contexts. The insights into cognate fields are invaluable for students and researchers working with biblical texts and are indicative of the potential of this kind of dialogue. Feder, for example, isolates five functions of Hittite ritual texts: (1) memorization to aid ritual performance; (2) preservation of tradition; (3) enactment of authority; (4) production of new rituals; and (5) regulation of legitimate practice (pp. 134–41). He notes points of substantial overlap with biblical texts (albeit also acknowledging divergence). Feder concludes, “the recent explosion of research into the textualization of Hittite ritual offers fascinating prospects for understanding the formation of the Priestly source” (p. 145). However, at this point, methodology becomes crucial. How and to what degree comparative insights should shape understanding of the Old Testament remains the central, and debated, question.

Further essays elucidate ritual in ancient Israel. Rüdiger Schmitt surveys material evidence from pre- and post-exilic Judah to ascertain the degree to which cultic, especially pagan, practices changed (pp. 151–71). Based on the ongoing use of figurines in the Persian period, Schmitt concludes that there is little evidence for a strongly centralized cult in this era (p. 166). James Watts provides a useful survey of ritual theory and its proponents (pp. 173–79) before turning to Leviticus 12 to test his thesis that interpreting a ritual text does not interpret the meaning of the ritual. In line with his wider program to read Leviticus as supporting Aaronide hegemony, Watts argues that Leviticus 12 is best understood as a “payment schedule” written to emphasize priestly dues (p. 181). In an intriguing essay, Christian Frevel argues that the function of ritual textualization in Numbers is, somewhat paradoxically, to enable variance, with biblical texts intentionally forming only a framework for ritual practice (p. 208). Hence, against an understood background of Late Persian “Judaisms” (pp. 206–7), biblical ritual texts preserve tradition while also legitimating diversity (p. 209). Jeremy Smoak’s excellent speech-act analysis of the Aaronic blessing in Numbers 6:22–27 finds that priestly annunciation of these words performs YHWH’s act of speaking blessing, thereby authorizing the priests as divine messengers (pp. 224–25). Dorothea Erbele-Küster posits that Leviticus 12–15 “do[es] not support any conclusions about real-world cultic-ritual praxis” (p. 252). Instead, the legislation becomes a means of producing gendered bodies through discourse.

The remaining three chapters explore the reception of ritual texts. Julia Rhyder examines Ezra-Nehemiah and Chronicles to ascertain why ritual practice differs from the Torah that is so highly esteemed in each work (pp. 255–79), Daniel Falk turns to the Dead Sea Scrolls (280–311), and William Gilders analyses the use of Leviticus 16 in Mishnah Yoma, Tosefta Kippurim, and Sifra Aḥare Mot (pp. 312–25).

Text and Ritual in the Pentateuch is an eclectic collection. This is not a fault of the volume; rather, it simply reflects the diversity of approaches and presuppositions inherent to Old Testament and ANE studies. Accordingly, different views are articulated regarding how best to interpret ritual texts. The essays by Watts and Frevel are a case in point. Whereas Watts views the skeletal nature of Leviticus 12 as a tell-tale indicator that persuasion is focused on legitimizing priestly prebends, Frevel understands ritual lacunae as a deliberate device whereby variant groups could claim Torah conformity. Hence, readers hoping for any kind of neat resolution to the hermeneutics of ritual texts will be disappointed. Those, on the other hand, who are seeking a robust induction into a complex but nonetheless vital discussion will find themselves well-served.