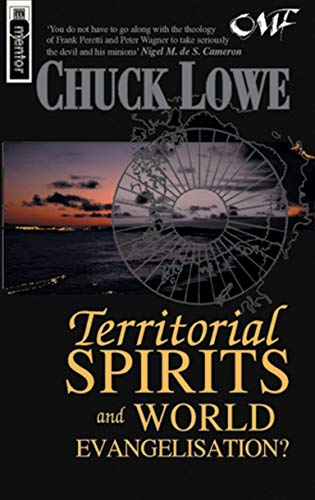 I am becoming increasingly convinced that a good book whether dealing with matters theological or otherwise, should resemble a good meal. Just as the sweet course should be the crowning glory of a meal, making subtle references to that which has delighted both palate and eye before it, so should the final chapter of a book be. Chuck Lowe in Territorial Spirits and World Evangelisation? as something of a ‘literary chef, in this respect, achieves the twin accolades of informing head and motivating heart in the area of contemporary spiritual warfare.

Here is a book that seeks to provide some much-needed illumination on the current ‘trendy bandwagon’ of Strategic Level Spiritual Warfare (SLSW). Lowe engages at length with the main proponents of this so-called school of SLSW, most notably Peter Wagner. Indeed, both the title of the book, a direct reference to Wagner’s premier book in this field, and the extensive bibliography bear ample testimony that Lowe is not interested in stereotypical evangelical knee-jerk reactions.

What should one’s reaction be to those who are certain that extended periods of prayer, ‘prayer walks’ and seeking the name/s of the ruling demon/s to do battle with them in the heavenlies will open up our towns and cities to the Gospel? Has the church neglected to utilise aspects of its God-given authority in Christ to fulfil the Great Commission? What hermeneutic should one apply to such chapters of Scripture as Daniel 10 and Ephesians 6? What are the origins of SLSW?

These are questions that cannot and must not be neglected. SLSW makes some startling claims which must be faced head on by a church that has often abrogated its responsibility in the area of spiritual warfare. Lowe seeks to guide us through this minefield and draw attention to some of the presuppositions with which Wagner et al. operate.

Despite the occasional over-pithy endnote, of which there are many, this is a serious scholarly work. Lowe takes the time to survey various manifestations of anything that may be classed at ‘SLSW throughout both Jewish and church history. Chapters are devoted to ‘SLSW in the InterTestamental Period’, SLSW in Church History’ and even ‘SLSW and Animism’; no stone is left unturned. Lowe seeks to be as fair as possible to the proponents of SLSW but, nonetheless, pulls no punches. His increasing incredulity at many of the claims made by SLSW is clear to see; indeed, it is quite difficult to remain critically detached (is such a thing genuinely possible?!) as one reads his book. If one were to offer any criticism it would be, to return to our ‘meal analogy’, that the ‘main course’ is too heavy. The latter two of the above three chapters are not easy reading, but then have extracts from 1, 2 and 3 Enoch ever been so?

Churches sometimes remind one of rivers: they follow the course of least resistance! In his penultimate chapter Lowe briefly surveys the life and ministry of James Fraser to the Lisu in China at the turn of the 20thcentury. In the face of one who faced direct attack from those he was seeking to win for Christ, bouts of lethargy, apathy and depression, and yet refused to surrender to such hindrances to his work, we have ample cause for thoughtful reflection at the ‘quick fix’ culture of much of Christendom. Lowe picks up on this in his final chapter and strongly criticises western evangelicalism for being obsessed with ‘technique’: wanting to find the quickest and most successful way of praying, evangelism, church growth and so on. When one reflects upon many of the titles that adorn the shelves of our Christian bookshops promising near instant success in all these areas and more, I find myself having to agree. There is a real temptation for both the church and individual Christians to take the course of least resistance that promises even a modicum of success—and often that is measured by our standards rather than God’s.

Lowe’s challenge to the Church, while age-old, is far from anachronistic. It is the call to stand firm to the end; it is the call to faithful, persistent prayer by the saints on behalf of a lost and hurting world. The activities of SLSW may fill our Church prayer meetings for a season but often disillusion in the end can lead people to question the power of the Living God. Since initiating the review of this book it has proved invaluable for providing pastoral wisdom for those whose zeal for the Kingdom is never in question. Prayer is not a hobby but a lifestyle. To conclude, one is reminded of the challenge and encouragement of Romans 5:3–5: ‘… we also rejoice in our sufferings, because we know that suffering produces perseverance; perseverance, character; and character, hope. And hope does not disappoint us, because God has poured out his love into our hearts by the Holy Spirit, whom he has given us.’