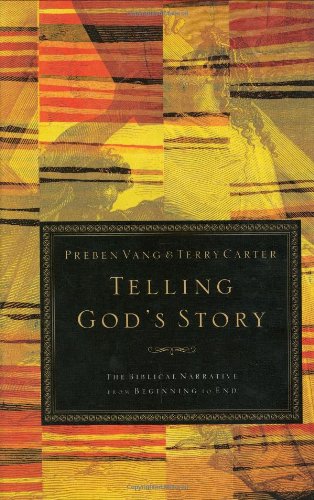 Telling God’s Story: The Biblical Narrative from Beginning to End

A student at a Christian college, who happened to be the son of a pastor, recently told me what he knew about “Jacob and the whale” (confusing Jacob with Jonah). Even students with Christian backgrounds are entering college with very low biblical literacy, and those who do know a few biblical details have been accustomed to hearing them in isolation from the biblical narrative as a whole. It is the nature of sermons and Sunday School lessons to focus on brief episodes each week, and often there is little done to connect the shorter stories with the whole. Preben Vang and Terry Carter have set about to address this shortfall by retelling the biblical metanarrative in Telling God’s Story: The Biblical Narrative from Beginning to End. Their effort is admirable, and they succeed in putting the story of Old and New Testaments into a readable summary complete with helpful theological explanations along the way. This book should help readers to know the story from beginning to end and to be able to relate the purpose of the story (p. xii).

The authors identify the purpose of the story with helpful theological insights. They also emphasize the major theological theme of covenant and God’s use of that covenant to bring the whole world back into right relationship with himself, as it was portrayed in the Garden of Eden (pp. 43, 52, 74, 142, 147, 150, 173–74). Another theme this book emphasizes is God’s use of ordinary people to carry out his plan. Even though Abraham, Moses, and David made mistakes, God was willing to use them “to carry out his awesome plan for salvation and redemption” (p. 65; cf. 110). This is related to another theme: God’s ability to orchestrate events, even the actions of pagan kings, to accomplish exactly what he had determined (p. 150; cf. 114, 123, 134).

This book focuses on narrative and as such is in danger of excluding large amounts of biblical material that do not actually tell a story. Nevertheless, the authors provide helpful sections on prophets, poetry (including Wisdom), and parables (pp. 124, 163, 203). Several helpful drawings and charts bring together elements in a visual manner. The explanation of apocalyptic is particularly helpful, and the book also explains different eschatological theories. Unfortunately, there is no bibliography or list of resources for further reading, although a few footnotes do make suggestions.

The authors summarize the biblical story in twelve points, and at the end of major sections, they reproduce this summary along and indicate where they are in the retelling of the story. This greatly furthers their purpose of giving the reader an overview of story, not just presenting disconnected details. They also helpfully summarize their theological explanations in sections entitled “Things to Consider,” which appear at the end of many of the chapters.

Though Vang and Carter helpfully retell the biblical story, there are some possible weaknesses in their content. They sharply dichotomize between the unilateral covenants of Abraham and David and the bilateral covenant of Moses. Law defines the latter covenant, while they define the unilateral covenants as “an expression of pure grace” (pp. 2, 5). They emphasize the Ten Commandments as rules, rather than instructions (as the Hebrew word for “law,” torah, implies [p. 3]). In their rejection of legalism, they dismiss the Mosaic covenant as “shattered” and beyond restoration because of idolatry, social injustice, and religious formalism (pp. 4–5).

The ancient treaties on which the biblical covenants are modeled, however, are never really shattered. If the weaker king rebels, then he receives the curses and consequences of broken covenant. But the agreement is not rescinded; it is merely enforced more closely. Likewise, the new covenants of Jeremiah and Ezekiel are not completely discontinuous with the Mosaic covenant, but an internalizing of that covenant. In the proposed new covenants, law is not abolished but written on the heart and obeyed with sincerity; it is not legalism. This is the same attitude that Jesus had to the law in the Sermon on the Mount. While rejecting legalism that minimized the law’s effectiveness, he made the law more stringent by calling for a right attitude as well as action (although the prophets had already called for an internalization of obedience).

While apparently rejecting law and the Mosaic covenant, Vang and Carter also acknowledge the importance of obedience in following Jesus, even going so far as to say “that obedience is a prerequisite for entrance into God’s kingdom” in the sense that a child obeys a parent out of trust, not legalism (p. 202). This statement is probably too strong and even seems to contradict Vang and Carter’s general attitude to law. Not even the Mosaic covenant was a prerequisite for entrance into God’s kingdom, as God had already effected salvation in the form of the exodus before the law was given. Vang and Carter’s discussion of James is more balanced, and there they recognize works as “evidence for the genuineness of faith” in the post-conversion experience (p. 306). This is a confusing topic as the debates within the NT show, and Vang and Carter have not managed to clarify the topic for their readers as they attempt to reject legalism (but identify legalism and law) and yet are still aware of the importance of ethics in the Christian faith (pp. 300, 309, 331).

Overall, Telling God’s Story achieves its goal. It provides a readable review of the biblical narrative with explanations that will help a general audience gain a better grasp of the Bible as a whole.