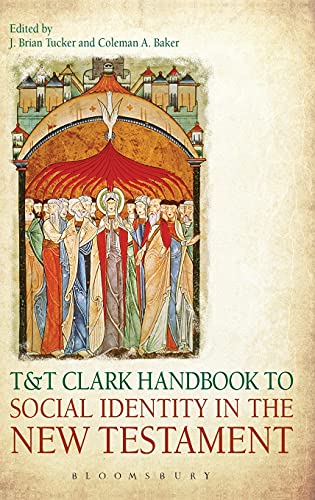 T&T Clark Handbook to Social Identity in the New Testament

Interdisciplinary methodologies within biblical studies have traditionally taken longer to gain traction than in the broader academy. The uptake of Social Identity Theory—a theory of identity based on group membership and differentiation from other groups—by biblical exegetes reflects this trend. Originally proposed in the seminal chapter by Henri Tajfel and John Turner (“An Integrative Theory of Intergroup Conflict,” in Psychology of Intergroup Relations [ed. W. G. Austin and S. Worchel; Monterey: Brooks/Cole, 1979], 33–47) and its subsequent expansions, this psychological theory rapidly made inroads in the social sciences. However, the first known application in biblical studies had to wait until 1994 with Philip Esler’s BNTC paper on Matthew—only now published in this volume (pp. 147–72). Since then, engagements with this broad and robust psychological methodology have slowly gained momentum.

This volume stems from the interest in Social Identity Approaches (SIA) and seeks to provide a historical and methodological introduction along with concrete examples of application in a New Testament setting. The editors have gathered contributions from a wide variety of international scholars including established SIA scholars Philip Esler and Rafael Rodriguez. The book is organised into two major divisions: Part 1 dealing with Methodological Studies and Part 2 highlighting applications in Textual Studies.

The methodological section provides an excellent introduction to SIA and bridge for those with a prior understanding of SIA in other disciplines. Notable contributions here are Philip Esler’s history of SIA (pp. 13–40) and Coleman Baker’s integration of Social Memory and Narrative Theory with SIA (pp. 105–119). This section is rounded out with several essays investigating social features, such as ritual, that support SIA investigations.

The textual studies section seeks to provide several SIA applications to the biblical text with almost every New Testament book being covered—the Thessalonian letters being the notable exception. While the essays vary in quality and applicatory scope there is a high overall standard, and many essays provide nuanced insights into the chosen text. In this section Philip Esler’s paper on “Group Norms and Prototypes” in Matthew (pp. 147–72) is published for the first time, albeit in a revised form, and represents a robust example of applying Tajfelian Social Identity Theory methodology. Kar Yong Lim’s paper “If Anyone is in Christ, New Creation” (pp. 273–88) helpfully explores temporal aspects of SIA within the scope of 2 Corinthians. Jack Barentsen’s paper on “Stereotyping and Institutionalisation” (pp. 367–88) usefully picks up on a later SIA extension in stereotyping from S. Alexander Haslam, Penelope J. Oakes, and John C. Turner, Stereotyping and Social Reality (Oxford: Blackwell, 1994), while J. Brian Tucker’s paper on Philemon (pp. 389–407) provides insight on the issues surrounding multiplicity of competing identities.

This volume provides a broad perspective on social identity and as the editors note in their introduction they “have not attempted to restrict the ways scholars approach this topic.” While in many ways this breadth is laudable, it also contributes to an incongruity throughout the book. Although most contributors interpret Social Identity Theory as stemming from the work of Henri Tajfel and John Turner, some take a different approach. These papers apply a type of “socialised microsociological Identity Theory,” which can confuse the reader. But this confusion is not restricted to inter-disciplinary SIA applications, as even the psychologist Michael Hogg distinguishes the two theories as occupying “parallel but separate universes.” (Michael A. Hogg, Deborah J. Terry, and Katherine M. White, “A Tale of Two Theories: A Critical Comparison of Identity Theory with Social Identity Theory,” Social Psychology Quarterly 4 [1995]: 255.) This important distinction is often overlooked.

Throughout the methodology and application chapters many authors address key issues for the biblical and theological application of SIA. Questions such as the plausibility of constructing social models from orally derived texts and traditions, and the problems of identity salience within multiple overlapping identities, are investigated and preliminary solutions are proposed. Insightful essays from SIA stalwarts highlight key methodological concerns and pitfalls for newcomers to the field. Evidently these warnings and signposts are apt as even within this volume some papers seek to apply SIA in these ways. For example Esler notes that the nature of SIA is based upon the “social psychology of human groups in conflict” (p. 156). However some papers seek to apply Social Identity Theory in a static format, describing in-group factors, without any consideration of the inter- and intra-group conflict that forms the basis of SIA.

Finally while some authors in the volume recognise the broader scope of SIA, and include subsequent works by Hogg, Oakes, Haslam, and others, some papers simply apply the methodology as described in Tajfel and Turner’s initial explorations. This unfortunate limitation of scope hampers the application of some papers as their methodology would have been strengthened and sharpened by the insights of the later Social Identity approaches. Nevertheless, as with many inter-disciplinary approaches, the techniques that are self-evident in the source discipline are often less than evident in the target discipline.

However, these issues are merely an indication of the burgeoning nature of SIA in biblical studies. Notwithstanding these, this volume successful advances the methodology within biblical studies. It will prove invaluable for students and scholars seeking new insights into the biblical text, and also for those with a prior background in social psychology making the transition to biblical studies. This is already an important contribution to the field, and will serve as an excellent basis for further research.