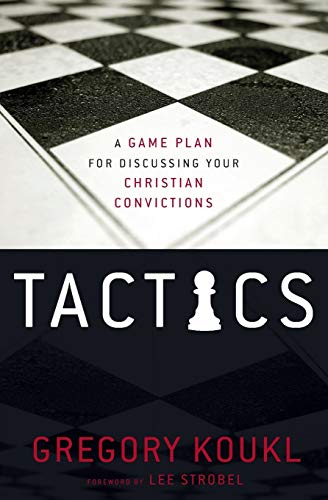 Tactics: A Game Plan for Discussing Your Christian Convictions

Koukl has written a practical guide, accessible to any Christian. Tactics does not claim to be an apologetics textbook or even a book intended to develop a particular apologetic theory. It is simply a guide to having better conversations regarding one’s Christian convictions.

The book is divided into two main sections: “The Game Plan” and “Finding the Flaws.” With titles like, “Diplomacy or D-Day?”, “Getting into the Driver’s Seat: The Columbo Tactic,” “Practical Suicide,” and “Steamroller,” one can see that this book is winsome and enjoyable to read. Koukl goes to great lengths to communicate at a level where any Christian will be able to learn from Tactics.

Part one, “The Game Plan,” explains and develops what Koukl he calls “The Columbo Tactic.” The name, of course, is taken from the American TV detective who on appearance seems to be completely clueless, but then by asking key probing questions is able to solve the mystery every time. Essentially, Koukl wants his readers to learn how to ask good questions to lead a conversation while avoiding arguments, all the while in control of the conversation.

Very helpfully though, before getting into the tactic, Koukl addresses some of the key reservations all Christians have with sharing their Christian convictions. He acknowledges that so many of these conversations can end up in disaster (“D-Day”), but explains how, by taking the approach he offers in this book, our conversations can be more diplomatic. He then goes on to establish a more modest goal than many will have when entering these conversations. Koukl’s goal is not, necessarily, to see the person adopt the Christian’s convictions and become converted as a result of that initial conversation. His goal is described as “leaving them with a stone in their shoe.” In other words, the Christian can diplomatically walk through the conversation addressing the questions raised and leave the other person with a nagging idea that their worldview just doesn’t work. This will hopefully lead to further conversations.

Part one is helpful on a number of levels. Unfortunately, I have been in a number of those D-Day conversations where what was intended to be a constructive discussion on Christianity ended up in a disastrous argument. Thinking carefully on how to ask better questions is a critical skill any Christian can develop. This same skill is helpful in any conversation—even those with other Christians where we are discussing subjects on which we do not agree.

At the same time part one is inadequate in that most of the conversations described seem to fall short of explaining the gospel to the non-Christian. I understand that I may not get to that every time, and I am looking for an opportunity to follow-up the initial conversation with more discussion. However, some of the conversations described in the book are with strangers one is likely to never see again (i.e., “The Witch in Wisconsin” in ch. 1). In the description of even these scenarios, it seems as though Koukl is stating that this is sufficient for communicating one’s Christian convictions.

However, in the Wiccan example nothing is said that would even allude to the fact that Koukl’s convictions are Christian. He helpfully shows her how she has major inconsistencies in her own worldview—i.e., she says she values all of life and is yet pro-choice. He clearly shows that he sees this as inadequate and that his conviction differs. But nothing he says would communicate to the lady that his convictions are Christian.

Again, I find the example of how to listen and how to ask probing questions very helpful. However, I would like to see more clearly how, even with strangers, I can clearly present my convictions as Christian, rooted in Scripture, and not just my convictions that happen to differ from theirs.

That is probably why part two, “Finding the Flaws,” is more helpful. Koukl basically shows the reader how to listen carefully to see the inadequate and inconsistent ways people will attempt to explain and defend their position. It is essentially a primer on logic written in a very helpful and engaging manner.

Any Christian would benefit from reading this section—probably more than once—for two reasons: (1) it helps Christians develop the tactics necessary to lead conversations regarding their Christian convictions, and (2) most of us do not realise how illogical and inconsistent we are ourselves. This section will help any Christian think more carefully about their own convictions and therefore as a result be more consistent in presenting them to others.

All through the book Koukl gives helpful illustrations, summaries, and simple steps virtually anyone can follow. Even with the weakness explained above, Tactics is still the first book I recommend to Christians who are looking to equip themselves to more effectively share their Christian convictions with their non-Christian friends, neighbours, coworkers, and relatives.