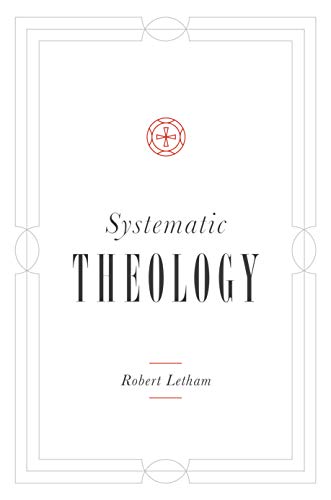 There was a time we only had Berkhof, Hodge, and a little bit of Bavinck translated into English. A juggernaut has opened up in recent years. The Bavinck appetizer, The Doctrine of God, trans. William Hendriksen (Edinburgh: Banner of Truth, 1978), gave way to the English translation of his four-volume Reformed Dogmatics, ed. John Bolt, trans. John Vriend (Grand Rapids: Baker, 2003–2008). Now Reformed theologians such as Robert Reymond, John Frame, Michael Horton, Douglas Kelley, and Joel Beeke have expanded the available literature with substantial and in some cases, multi-volume systematics still in process. Robert Letham, Professor Systematic and Historical Theology and Union School of Theology in Wales and Adjunct Professor of Theology at Westminster Theological Seminary, enters this assembly with a solid and, typical for Crossway, handsome one-volume Systematic Theology.

Letham is rightly esteemed for his hearty and essential texts in confessional history and theology and Christology, as well as the recently updated treatment of the Trinity. His new Systematic Theology is tightly woven yet conversational, accessible yet muscular, exegetical where it counts, and keeping to the biosphere of biblical, historical, and systematic theology. In this sense, one familiar with the “synthetic-genetic” method of Bavinck will feel at home. One reads Letham with a sense of his staggering breadth of learning and years of ministry and scholarship. Letham admits he is not trying to say everything about everything in this project. That is not what a one-volume systematic theology is for. However, it is clear he says what he wants and how he wants. For instance, he admits to a methodological arrangement that departs from typical Reformed theologies (not to mention the Westminster Confession of Faith). Rather than taking Scripture as his pedagogical principium, Letham begins with 140 pages of detailed, historical-theological exposition of the doctrine of God. He contends that to begin with Scripture as epistemological foundation “begs the question, in today’s world, of the identity of the God whose Word it is. Moreover, God precedes his revelation” (p. 36). Letham ably summarizes the traditional proofs for the existence of God (Aquinas, Anselm), their critics from Gaunilo to Kant, and assesses these classical arguments as lacking much more than “ex post facto” utility for buttressing what is to be “believed on the basis of revelation, creation, and Scripture” (p. 49). Even with his explanations, one may still wonder, why then not start methodologically with revelation?

As one would expect of Letham, his treatment of the Trinity, which “is the Christian doctrine of God, which the unfolding of biblical revelation discloses in Christ” (p. 152), is a high horsepower discussion. Letham appropriately flexes his historical-theological muscle throughout these pages, not to mention his facility with pertinent secondary literature in New Testament studies, for instance, in his discussion of the preexistence of Christ. He sprinkles insightful observations throughout, such as his insistence that the eternal generation of the Son mitigates against subordinationism. Letham helpfully discusses the main contours of Eastern and Western issues related to the Trinity, particularly the filioque, including Moltmann’s and Pannenberg’s hesitation on the same. Letham defends the filioque yet leaves the reader wanting more attention concerning the prevailing disparities between East and West (cf. Letham’s book on Eastern Orthodoxy—Through Western Eyes: Eastern Orthodoxy: A Reformed Perspective [Fearn, Ross-shire: Mentor, 2007]).

The doctrine of Scripture receives nimble, historically wide-ranging, up-to-date treatment. In particular, he deploys Bavinck’s incarnational model to answer both Barth and Peter Enns, whose use of incarnational modeling lacked Bavinck’s (and the church’s) recognition that the divine and human initiative in both incarnation and inspiration are asymmetrical. Indeed, Letham’s lament that Open Theism lacked historical-theological awareness and was a product of Postmodernism (pp. 178–81) could be fittingly cut and pasted in this critique of Enns. Letham offers a clear cessationist assessment of continuationism, including a healthy interaction with Wayne Grudem. His clarification of cessationism in light of the relative infrequency of the miraculous and extraordinary gifts in apostolic times offers a pointed argument.

Just as a one-volume Systematic Theology cannot say everything about theology, so a brief review cannot say everything about said one volume. Hence, a few remaining comments on some unique features of this text must suffice. First, Letham’s treatment of the pactum salutis (the covenant of redemption) unhelpfully characterizes it as inconsistent with “the heart” of God’s covenant and the Trinity (p. 437). No historically Reformed orthodox treatment of the Covenant of Redemption intends or requires subordinationism or any confusion in relation to the indivisibility of the Trinity or hypostatic distinctions. Unfortunately, in this section, there is much suggestion, and less substantiation. Letham’s language of “the eternal Trinitarian counsel” or consilium salutis, as a means of avoiding the supposed problems of the pactum offers an attempted corrective to perceived, but non-existent problems. To assert that the pactum “generally overlooks the point that central to the covenant if the promise of living fellowship, communion, and union” (p. 437) does not seem to account for the fact that most positive treatments of the pactum in the various strands of the Reformed tradition explicitly insist upon these very relational aspects of the Trinity ad intra in order to explain what the Triune God accomplishes redemptively ad extra.

Letham, in true Reformed fashion, has much helpful to say about sanctification and union with the resurrected Christ, keeping in step with Calvin’s emphasis on the work of the Holy Spirit in the life of the believer. However, Letham’s positing of theosis as an operative category in soteriology will not likely prove convincing. Although he is careful to clarify what his doctrine of theosis is and is not within a Reformed theological program, insofar as no ontic assimilations are implied, etc., and while he certainly means to take seriously the mystical (in the biblical sense of that word) implications of union with Christ in progressive sanctification, this will likely strike many readers as undue effort to appropriate an Eastern category. In other words, with good reason Reformed systematics have maintained the place and nomenclature of glorification in the ordo salutis. This historic commitment must also be held in mind as one reads Letham’s, at many points, helpful material on the connection between soteriology and ecclesiology.

Reminiscent of Warfield, Letham paints postmillennialism and amillennialism with similar brush strokes. He finds it difficult to distinguish between the two. While this is so on the surface of things, such as the parousia of Christ coming after the millennial age, there are redemptive-historical, biblical-theological, and hermeneutical trajectories behind an amillennial position that provide a trajectory toward more granular distinctions between the two eschatological positions than Letham expresses.

Notwithstanding these idiosyncrasies, this impressive achievement by Letham offers countless helpful tools, such as study questions, suggestions for further reading at the end of each chapter, appendices on creation days in Genesis and the historic creeds, a massive glossary and bibliography, and typical indices. This brilliant volume is among the very finest of recent entries into the field. The symbiosis of historical and systematic theology is likely the most robust of this late embarrassment of riches in reformed systematic theology.

At so many places Letham is simply excellent, at points he is constructively independent, at a few points, crucial ones, mind you, this reviewer finds him veering off and asserting more than accounting. So, eager appreciation will be aided by humble critical assessment at various junctures of his theological program. All in all, Letham’s Systematic Theology is a learned loadstone of theological guidance that will find a ready place close at hand for pastor and scholar, alike.