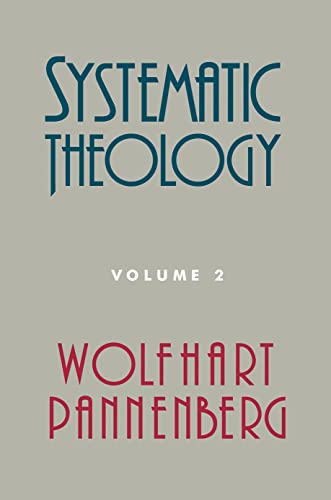 Some theologians become noticeably more liberal as they age, some move in a more conservative direction. Wolfhart Pannenberg, who recently retired as Professor of Systematic Theology at the University of Munich, Germany, is among the latter. His ‘rightward’ movement was detectable when this reviewer studied with him in Munich in 1981–82. Radical students were clearly unhappy with his growing criticisms of theological revisionism—including liberation theology and feminist theology—and left-wing politics. He commented in private conversation that in the 1960s and early 1970s, during the reorganization (chaos) in the German universities, radical students thought he had a ‘revolutionary heart’. He disappointed them and they became angry.

A parallel disillusionment has happened in theological circles among Pannenberg’s colleagues. He has clearly parted company (theologically) with early friends in process theology such as John Cobb. His mentoring of neo-conservatives like Richard John Neuhaus, and close associations with Cardinal Ratzinger of the Vatican’s ‘Holy Office’, have gained him the enmity of some ‘progressives’ in ecumenical circles. He is an outspoken critic of all kinds of radical revisionism in theology and displays no sympathy for attempts to ‘re-imagine God’ (for example as ‘God/ess’). In Systematic Theology, Volume 2 Pannenberg makes clear this antipathy: ‘The fact that a later age may find it hard to understand traditional ideas is not sufficient reason for replacing them’ (p. 422).

For these and other reasons many British and American evangelicals have come to think of Pannenberg as an ally. There are indications—more in private conversations than in public or published statements—that he is coming to think of evangelicals as a major part of his constituency. And yet this volume, the second of three that comprise his magnum opus, contains almost no references to evangelical biblical scholars or theologians; indeed, in spite of its overall conservative cast, it contains elements which should raise concerns among evangelicals. For example, on the last two pages of text (pp. 463–464) Pannenberg reveals quite clearly his antipathy toward any idea of scriptural inerrancy. (In the last conversation this reviewer had with him, in April 1992, he made that antipathy abundantly clear, labelling belief in scriptural inerrancy, however nuanced, ‘intellectually dishonest’.)

On the other hand, evangelicals will no doubt find Pannenberg’s continuing defence of the centrality of the cross and resurrection event(s) for authentic Christianity impressive, coming as they do from a major German theologian. In this volume, moreover, Pannenberg leaves no doubt whatever about his belief in the necessity of the empty tomb for true belief in the resurrection. He also defends the ontological deity of Jesus Christ and the ontological Trinity (in other words, he eschews defining these merely functionally, and insists that they are descriptions of the actual being of Jesus and God). For these and other reasons, in spite of a view of Scripture many may find weak, evangelicals will welcome Pannenberg’s summary of the doctrines of humanity (theological anthropology) and Christ (Christology) in this volume.

Like Systematic Theology, Volume 1 and many of Pannenberg’s earlier works, volume 2 is typically German in terms of sheer wordiness, turgid style, abstract drinking, and the demands it places on the reader. Novices should not begin here! (If you are interested in reading the ‘later’ Pannenberg, begin with Christianity in a Secularized World (Crossroad, 1989) and continue with An Introduction to Systematic Theology (Eerdmans, 1991). You might also want to consult a good secondary source such as Stanley J. Grenz’s Reason for Hope: The Systematic Theology of Wolfhart Pannenberg (Oxford, 1990).) An example of what the reader will run into in Systematic Theology appears on page 454 of volume 2: ‘Not in himself, but in the other, the Spirit is with himself.’ This is the first sentence of a section discussing the role of the Holy Spirit in the trinitarian self-actualization of God in the history of salvation. Immediately afterwards, Pannenberg launches into a discussion of how this programmatic statement of his is similar to and yet different from Hegel’s view. In general, the vocabulary, level of abstraction (almost no examples or illustrations) and lengthy, detailed discussions of the history of ideas will make this volume, like the first, extremely challenging for many readers.

In Christology—which is the real heart of this volume—the resurrection of Jesus revealed who he really was all along—the pre-existent Son of God in human form. This stands in tension with Pannenberg’s earlier Christology (e.g. in Jesus—God and Man) in which the resurrection not only revealed but determined with retroactive force that Jesus Christ was already God’s Son in his earthly life. Although Systematic Theologycontains echoes of that earlier eschatological ontology, overall it reveals a much more traditional, Augustinian, even Platonic ontology in which nothing that happens on earth really makes any ontological impact on God. Such a God cannot, in spite of Pannenberg’s express intent, take real risks and the incarnation, cross and resurrection do not mean anything new for God.

Pannenberg’s Systematic Theology, Volume 2 is valuable, but only for the most ardent, persevering and patient students of theology. For those who want to get the best of the same basic ideas in a more digestible form I recommend Stanley J. Grenz’s Theology for the Community of God (Broadman-Holman, 1994).