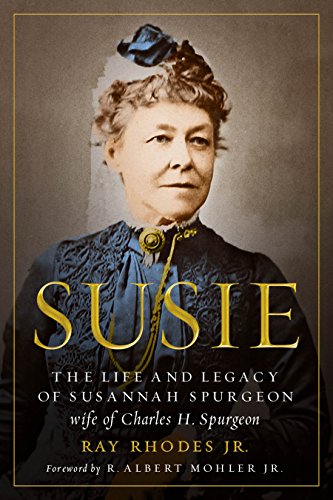 Susie: The Life and Legacy of Susannah Spurgeon, Wife of Charles H. Spurgeon

The late Barbara Bush used to tell a funny story. One time when she and her husband (the future president) were on the campaign trail, their caravan stopped at a gas station in a rural area. Waiting for vehicles to be serviced, George spied a man on a tractor in a field across the way and teased Barbara, “See, if you’d married him you would be living on a farm.” She cleverly quipped in reply, “If I had married him, he would be running for president and you would be riding on that tractor!” That playful exchange between a long time happily married couple often comes to my mind when considering the enormous influence a wife can have on her husband’s life and vocation. In the case of Charles Spurgeon, I’m not sure we can go so far as to say his marriage to Susie changed his calling altogether, but her encouragement of him in life and ministry enhanced it in great measure. It is this enhancement of one of the greatest preaching ministries in history as well as Susie’s own work for the kingdom that Ray Rhodes brings to full light in this timely and uplifting biography, Susie.

As a young woman, even girl, Susie was exceptionally attuned to the Lord’s voice and leading in her life. Hers was not the story of a wasted youth later regretted. While she later said she experienced more spiritual enlightenment and refreshment reflecting daily on smaller portions of Scripture, she gained a firm command of the scope and sweep of the Bible from an early age. This undoubtedly enhanced her later meditations and enabled her to engage with her pastor theologian husband in way that edified them both.

While the book is not easily divided into just two parts, it seems that Susie Spurgeon’s ministry could be. First, she encouraged and facilitated her husband’s ministry, enabling him to work, write, disciple and preach long hours, sometimes through the mental anguish of depression that plagued him for much of his life. Susie read to Charles, sat with him and generally provided the sweet companionship for which his soul longed. Even though she suffered from intense loneliness when his preaching engagements took him away for overnight trips, as they would many times in their marriage, Susie resolved not to complain or be any kind of obstacle to his ministry. As Rhodes makes eminently clear, “It was much easier for Spurgeon to preach, write, and lead in ministry because of the encouragement and cheers of his ‘precious love’” (p. 249).

The other part of Susie’s ministry included her important support of preachers and their families through her book fund as well as her own writing. Although one cannot really say this venture was independent of Charles and his work, as he authored most of the books distributed, it was Susie’s personal ministry. Begun in 1875, Susie considered this work the joy of her life and consistently found strength and encouragement from the thank you letters she received from numerous grateful pastors. Eventually the book fund distributed over 200,000 volumes. As though this wasn’t enough work for the wife, mother, and often suffering invalid, Susie also wrote five books and numerous articles, edited Charles’s four-volume Autobiography, and corresponded with thousands over her lifetime.

Although the whole of this very readable biography will provide interesting details of Susie Spurgeon’s life and marriage, perhaps my favorite part of the book is the Epilogue. Here Rhodes summed up basic principle of her life “that are worthy of our consideration and imitation” (p. 237). In this brief but inspiring chapter, Rhodes highlights Susie’s reliance on Christ, training of her twin boys (the upbringing of which seems to be a bit scant in the record) to treasure the Bible and good books, her love for pastors, and facing hardship with faith, among other admirable practices and qualities. This part of the book reads like a tribute as much as a biography and well sums up the contributions of its primary subject.

In the preface to the book, Al Mohler calls it “one of the strangest silences of church history” that wives of famous men in ministry do not receive more historical attention. Perhaps in our feminist age we simply cannot bring ourselves to give this role as much importance as it deserves. Also, we can admit that not all famous couples in ministry had a marriage of such uncomplicated devotion and mutual encouragement as the Spurgeons. Where they may have, historical documents often do not record nor reveal as much about the wife. When they do, however, we do well, as Ray Rhodes has, to give them our full consideration and glean from them the encouragement study of a life to devoted to God can afford.