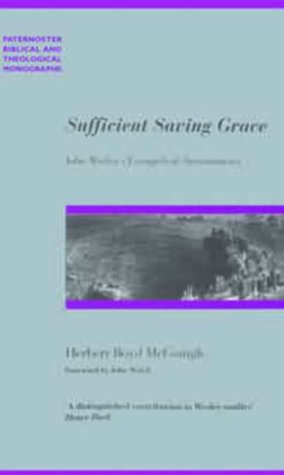 This book is the published version of Herbert McGonigle’s highly regarded PhD thesis (see the Foreword by John Walsh and the comment by Henry Rack) which examines John Wesley’s commitment to Arminianism. The title is taken from lines by Charles Wesley, characteristically combining the assertion of universal atonement with salvation by ‘sovereign’ grace: ‘For all Thou hast in Christ prepared/Sufficient, sovereign, saving grace.’

Wesley maintained that there was not ‘a hair’s breadth’ of difference between himself and John Calvin on justification, but where did he get his Arminianism, and how was it expressed? The answer in brief is that he inherited his Arminianism for his parents and from a native English tradition going back before Arminius. It has never been clearly established whether Wesley had read Arminius himself, but one of the two specific ‘discoveries’ offered by the book is that there is clear evidence that he read a substantial part of Arminius’s writing as early as 1731. (The other specific finding is that Wesley’s famous definition of sin as ‘a voluntary transgression of a known law’, not original, was borrowed from Richard Lucas).

After an introductory chapter reviewing the literature, Dr McGonigle provides a chapter on ‘Arminius and the Dutch Remonstrants’, and one on ‘Arminianism in England: 1590–1700’. Chapter Four deals with Wesley’s education as an ‘Epworth Arminian’ in the rectory, and the following chapters deal with the expression of his Arminianism in a series of debates and disputes with his Calvinist brethren. The first dispute arose in Bristol right at the beginning of the revival, when Wesley first undertook ‘field preaching’ in 1739 at the request of his close friend and ally, George Whitefield, and lasted till 1745. By then, he was trying to come to ‘the very edge of Calvinism’, making it clear that he denied all natural free will to ensure that salvation was all of grace, but reacting against antinomianism and double predestination.

When the controversy resumed in 1751, he developed his doctrine of prevenient grace to say that ‘a measure of free will was supernaturally restored to every man’ (192f.). In 1765, Wesley criticized the use of the Calvinist idea of the imputation of Christ’s righteousness (as presented posthumously in the writing of his old friend from Oxford days, James Hervey), believing that it was being used as a cloak for antinomianism. In chapter 10, Wesley’s doctrine of Christian Perfection is brought into connection with the Calvinist dispute. In chapter 11, Dr McGonigle deals with the later battle, beginning with the death of whitefield in 1770 and carried on largely by Benson and Fletcher for the ‘Arminian’ Methodists and Toplady and Hill for the Calvinists. An excellent final chapter looks at Wesley’s Arminianism as an integral part of his whole theology. Throughout all of this, the book provides a careful analysis and critique of all the major pieces of literature.

This is a major work of Wesley scholarship which no serious student of Wesley’s theology can do without. Coming to judicious conclusions on the basis of extensive scholarship, it is likely to stand as the definitive work on this aspect of Wesley’s theology. It is also a timely reminder that Wesley was an Evangelical Arminian. The label of Arminianism has been used by those who have departed from both Arminius and Wesley and defend some kind of Pelagianism, semi-Pelagianism, Socinianism, Rationalism or Liberalism. Wesley was quite clear that, despite the real differences over predestination, the Calvinists and he were at one in their affirmation of Evangelical Reformation doctrine, and particularly close on justification by faith and the atonement.