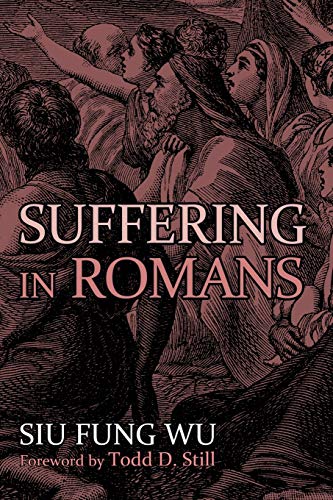 Siu Fung Wu’s engaging book limelights Paul’s remarks on suffering in Rom 5 and 8, seeking more narrowly to interpret them from the vantage point of the original audience. Thus, Wu utilizes an “audience focused” approach in an effort to understand how an inchoate Christian community made up of religious and social misfits located in the epicenter of the world’s most powerful empire might have heard comments like Romans 8:17: we are heirs with Christ if we suffer with him. This research question Wu pursues inductively, suspending overt presentation of a “theology of suffering” for his conclusion. The book itself develops in roughly four stages, and these stages provide a lens through which to observe the main lines of his argument.

Chapters 1 and 2 comprise “stage one,” and here Wu sketches out both the nature of his audience-focused methodology and the likely social, political, and economic make-up of the letter’s first readers. Given that Wu identifies the reading strategy of his book as its major contribution, these chapters are of particular importance as they frame and direct everything which follows. While the constituency of the church in Rome cannot be precisely known, Wu finds it plausible based on historical investigation that “the majority of the members would be familiar with socioeconomic hardship and religio-political injustice, or at least they regularly interacted with people who experienced hardship” (pp. 41–2). “Stage two” (chapter 3) shifts to exegesis of Rom 5 where in vv. 1–11 Paul first introduces the notion of suffering, suggesting surprisingly that affliction is actually something in which believers boast, and in vv. 12–21 he articulates how the reconciliation announced in v. 11 occurs. Wu’s rigorous four-chapter analysis of Romans 8 commands the lion’s share of his attention: (a) chapters 4 and 5 of the book address vv. 1–17, which depict suffering as a vocation to which believers are called; (b) chapter 6 examines the role believers’ suffering plays in the renewal of the cosmos (vv. 18–30); and (c) chapter 7 delineates what it means to share in the “triumph of God” even as believers suffer innocently for and together with Christ (vv. 31–39). “Stage four” brings Wu’s project full-circle by succinctly enumerating the audience’s “theology of suffering” which his research yields. Wu submits (a) that believers are unequivocally called to suffer, and that their suffering is an appointed means by which creation is reconstituted; (b) that suffering derives from God’s paternal favor, not his displeasure; (c) that suffering is bound up inextricably in Christ’s suffering and guarantees a share in Christ’s vindication; (d) that it is suffering which enables believers to partake in the victory of God; and (e) that the biblical canon “bear[s] witness to this theology,” which Wu outlines (p. 224).

Wu’s book advances the current discussion regarding Paul’s characterization of believers’ suffering in several respects. First, his reading of Romans 5 and 8 with an eye turned specifically towards what these texts say about suffering is unique. His exegesis compels, and he manages to be thorough without exhausting the reader with ancillaries. Second, reading Romans 5 and 8 in tandem permits Wu to engage in thoughtful intratextual exegesis, and he makes a strong case for the indispensability of interpreting them in light of each other. Third, Wu does an excellent job at foregrounding the OT material on which Romans 5–8 build. For instance, while a number of scholars pinpoint Genesis 1–3 as the backdrop to Romans 5:1–21, Wu alone shows how Paul reimagines the Genesis narrative so as to account for the proliferation of sin, death, and alienation from God which characterizes the human condition.

These virtues notwithstanding, both methodological and exegetical critiques may yet be justified. With regard to methodology I would call attention to two items. First, Wu largely presupposes his brand of reader-response criticism, leaving the reader to wonder both how he understands it to fit within the broader conversation and (more importantly perhaps) how he would respond to incisive objections lodged against it (e.g., Thomas A. Schmitz, Modern Literary Theory and Ancient Texts: An Introduction [Oxford: Wiley-Blackwell, 2007], 88). Second, Wu distinguishes his method from those who pursue an “implied” or “ideal” reader, hoping via his historical survey to more nearly approximate the “actual” reader. However, given his agenda, it is surprising to find spare treatment of primary literature and heavy reliance upon biblical scholars. One is left to question whether this procedure is adequate to sustain the weight of the project.

With regard to exegesis, I would make two observations. First, Wu contends on page 162 (as elsewhere) that through conformity to Christ “a large royal family of God is formed, and God’s program of transforming humanity and renewing creation is being completed in this process.” However, he never details how exactly participating in suffering effects this renewal. The proposal itself allures, for in addition to exegetical insight it extends pastoral promise; yet, nuance is needed in order for the proposal to gain traction. Second, while Wu produces impressive work on Paul’s use of Psalm 44:22 in Romans 8:36, I am reluctant to follow his conclusion that the quotation “[responds] to the questions in 8:35 and affirms that no suffering can separate believers from Christ’s love” (p. 193). It seems more plausible on the basis of the psalm itself and the development of Paul’s argument to point that it functions rather to substantiate the notion that believers experiencing adversity have indeed been separated from divine love. Paul then counters both the litany of questions in v. 35 and the quotation in v. 36 with the adversative “No!” Evidence to the contrary, suffering is actually an experience of God’s power and affection.

One need not agree with every element of Wu’s book to commend it heartily. He is a patient, sure-footed guide alert to the matters of which biblical students must be aware. The book will no doubt enrich contemporary discussion both of Romans and of the place of suffering in the writings of Paul.