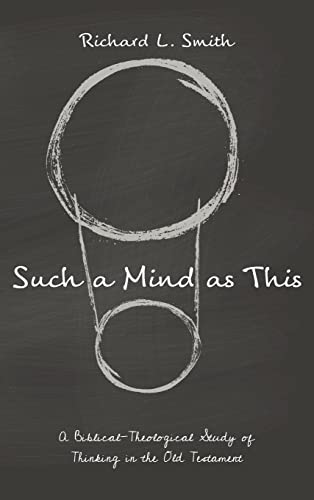 Such a Mind as This: A Biblical-Theological Study of Thinking in the Old Testament

I love this book. Don’t let the title mislead you. It is indeed about knowing and a proper use of the mind, but it is not an abstract philosophical study. Rather, it is a rich, deeply learned, biblical theology of the human understanding and its importance in relation to knowing God and his ways.

In a now famous statement, Mark Noll’s book, The Scandal of the Evangelical Mind (Grand Rapids: Eerdmans, 1994), opens with the declaration, “The scandal of the evangelical mind is that there is not much of an evangelical mind.” Noll has walked back this devastating indictment a bit, partly because evangelicals have begun to respond to his accusation and partly because Noll found certain pockets where evangelicals have made a difference. Analysis such as George Marsden’s The Outrageous Idea of Christian Scholarship (Oxford: Oxford University Press, 1998) signaled an awareness of the call for thinking Christians hitherto unknown.

Earlier appeals to responsible thinking must include Harry Blamires’s The Christian Mind (London: SPCK, 1963), and even Carl F. H. Henry’s The Uneasy Conscience of Modern Fundamentalism (Grand Rapids: Eerdmans, 1947), which argued that evangelicalism had slipped into easy-going pietism and called for active involvement in every sphere of life. Whatever one may think of Fuller Seminary’s saga, Henry (with strong support from Harold J. Ockenga) managed to muster forces of intellectual capability rarely seen. In his own way, the appeals of Francis Schaeffer belong to this company.

Richard Smith has carried things a step further. It has often been remarked that some of the best epistemologists (thinkers about thinking) are not particularly grounded in the text of Scripture. If that is true, then you need to read Richard Smith’s excellent study on knowing in the Old Testament to rectify this failing. What may sound to some like an academic diversion turns out to be a first-rate examination of where human knowledge was meant to originate and where it is now. Why is this important? Because we have lost the sense that our understanding matters in order to navigate life. Many people today are either hostile to thinking or (worse) indifferent to it.

This book has many virtues. The first is that it links knowledge to piety. Knowledge should never be severed from its spiritual roots, both for weal and for woe. To prove this Smith goes beyond quoting Proverbs 9:10—“the fear of the Lord is the beginning of wisdom: and the knowledge of the Holy One is understanding”—fundamental as is this truth. He delves into specific episodes in redemptive history, culling from them the admonition to know, and to know aright. Accordingly, the book begins with an extensive look at how unfallen man would use his mind to explore the wonders of God’s world. This may be one of its most original contributions.

The book then moves on to describe how sin has affected knowledge adversely. Particularly engaging is the examination of troubled souls such as Qoheleth and Job, as well as influential figures such as Daniel. Finally, Smith focuses on Jesus Christ and the age of redemption without leaving off the Old Testament emphasis.

The voices of Cornelius Van Til, John Frame, and others in the Reformed tradition echo throughout. But they are embedded in Bible study. Side refences abound with great quotes, confirming Smith’s insights.

Perhaps one of its unintended consequences is to re-introduce us to the riches of events and persons throughout redemptive history. This could become a devotional book exposing us to the treasure hidden in the biblical story. It is not a book to read rapidly from cover to cover. It is a book to be savored. Like a good wine, it should not be gulped but tasted judiciously.

This is a unique book that will be read profitably for many generations.