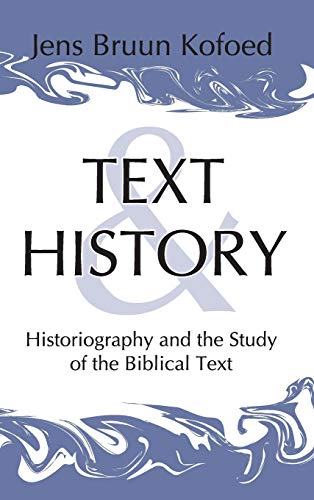 STUDY OF THE BIBLICAL TEXT

Kofoed’s Text and History is, in essence, a publication of his PhD dissertation. Kofoed deals with issues that relate to the challenge of biblical minimalism for reconstructing the history of Israel before the exile, focusing on the books of Kings as a case study. Chapter one describes philosophies of and approaches to history as a background for what follows. In chapter two, Kofoed discusses the implications of the lateness of the text and argues that such lateness does not rule out the possibility that the text can bear witness to earlier times, in particular discussing overall characteristics of oral tradition and making reference to ancient Near Eastern parallels. In chapter three he points out how various linguistic features of the text of the Hebrew Bible, such as dialect, orthography, grammar and vocabulary, are, by and large, not adequate criteria for dating the time of origin of the material due, for example, to societal and dialectal variations and possible linguistic updating of the text during its transmission. In chapter four, Kofoed looks at a few select parallels from the ancient world, including a list of Hebrew kings in comparison to Assyrian annals and latest evidence from Arabia relating to caravan trade with the biblical account of queen Sheba. These show the overall veracity of related biblical material in these cases to be a plausible position. Finally, in chapter five, he discusses the role of genre in historiography, pointing out the fluidity of definitions and that nothing speaks against the possibility that the authors of the books of Kings had a historical intent when they wrote, regardless of how successful they were in reality in depicting actual events. As a whole, Kofoed argues for the full possibility of using the book of Kings for historical reconstruction for the time before the exile.

The average reader may feel after chapter one that the book is fairly complicated. However, after the basic philosophical issues have been laid out in that relatively short chapter, what follows is much clearer and more straightforward. As a whole, the issues Kofoed presents are fairly well known, and, in the opinion of this reviewer, there are no major surprises in the book. However, it is a solid synthesis of a good amount of relevant evidence and well worth reading for anyone interested in the topic.