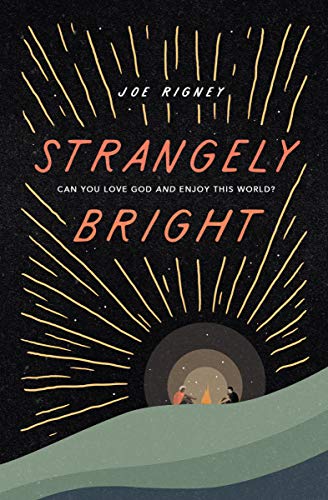 Strangely Bright: Can You Love God and Enjoy This World?

Many today in the Reformed Evangelical world associate the term “hedonism” not firstly with an ancient pagan philosophical system, but rather instinctively with seeing and savoring God. This may not bespeak historical accuracy, but it does demonstrate how pervasive the ministry of John Piper has become. An entire generation of evangelicals have grown up affirming that God is most glorified in us when we are most satisfied in him. In recent years, however, this idea has received an appreciative call for further development. We might call this the “beer and bacon” challenge. The Christian Hedonism promoted by Piper, some have pressed, needs to do more work on enjoying God by enjoying his gifts. While saying “yes and amen” to the approach Piper has taken to show how God is supremely better than any created thing, we can and should affirm that the purpose of creation is not merely to be eclipsed by the goodness of God. So, the challenge has been set: can Christian Hedonism sustain more beer and bacon?

In 2014, Joe Rigney answered in the affirmative with The Things of Earth: Treasuring God by Enjoying His Gifts (Wheaton, IL: Crossway, 2014). The Things of Earth is, however, a rather dense defense of this thesis, and so he has recently served us with Strangely Bright, a more accessible version of his argument. Rigney begins the book by framing up the central tension: should I enjoy God or the gifts that God has given? The tension is both experiential and biblical. It is not simply that we, as Christians, feel torn between wanting to enjoy God above all else, and being drawn to enjoyment of earthly things; the commands of Scripture seem to pull the reader in both directions as well. Paul counts “everything as loss” and “rubbish” in comparison to the “worth of knowing Christ” (Phil 3:7–8), but he also considers “everything created by God” as “good” and “not to be rejective if it is received with thanksgiving” (1 Tim 4:4).

Rigney begins to develop the biblical resolution to this apparent dilemma with a reflection on Psalm 19, and its description of the two books of God: general revelation (vv. 1–6) and special revelation (vv. 7–11). Reminiscent of many throughout church history, Rigney extrapolates from this psalm the deep meaning of the cosmos. Creation means more than its material form. The meaning of creation is God—he is its ultimate referent. This point should not be hastily passed by. It is not simply that we find similarities between God and creation, and subsequently make analogies on our own. The similarities are baked in. Their telos is to point beyond themselves to God. All created things (including those created by created things, like bread and wine) have a pedagogical purpose to teach us about God.

And this is where Rigney’s primary contention comes in: created goods teach us what God is like after, and only after, they are experienced in themselves. The analogy of God’s word being “sweeter than honey” and “more to be desired than gold” only makes sense once we have tasted the sweetness of honey and beheld the brilliance of gold (Ps 19:9–10). Having been situated in this thick and earthy context—where people go to bed in tents, bridegrooms emerge from their chambers in joy, and strong men run races with intensity—Scripture then serves as a tutor to teach us about what we are experiencing. “If creation is a language in which God speaks to us through sights and sounds and smells and tastes and sensations,” says Rigney, “then Scripture is the grammar textbook for that language, the language of God” (p. 26).

Rigney insists that it is not coincidental or arbitrary that human beings are physical creatures placed in a world teeming with pleasures of all kinds. It was God’s idea to make man a pleasure-seeking animal living in a world of pleasures, all of which are intended to be extensions of—and instructors about—his own delightfulness. Grasping this helps to avoid two pleasure-related temptations: idolatry and ingratitude. The former seeks to replace the Giver with the gift, and the latter dishonors the Giver by despising the gift. While the former is an obvious error, the latter is harder to spot for many Christians. Rigney illustrates the point by describing two possible Christian responses to a creational delight like “pumpkin crunch cake.” The first is to reason that while pumpkin crunch cake is good, Jesus is better. The cake should therefore be rejected. The second response is to reason that as good as the cake is, it is only a fraction of the goodness in Christ; the greater the enjoyment of the cake, the more apparent Christ’s goodness by superiority. “In the first case, we seek to make Jesus better by making creation worse. In the second, we seek to let creation be grand, only to remind ourselves that we have not yet begun to experience true grandeur” (p. 54).

Of course, this is all well and good in the abstract, but this balanced perspective cannot be maintained at every second of every day. This is why, in chapter 4, Rigney goes on to propose incorporating “anchor points” to assure Christ remains our “North Star, the fixed point that helps us to navigate our ship through life” (p. 61). In considering Paul’s exhortation to “set your minds on things that are above, not on things that are on earth” (Col 3:1–4), Rigney helpfully explains what this means (i.e., keeping Christ the “North Star”), while cautioning against concluding what it does not mean (i.e., disavowing all things earthly). Setting one’s mind on things above and not on things that are on earth looks like doing a whole lot of earthly good (Col 3:5–4:1). This is how it is possible for everything said so far to be entirely consistent with the biblical call to generosity and self-denial.

The final pages of the book are flavored with a pastoral experience that brings the balance necessary in order for a book like this to be received well in a world like the one in which we live; namely, a world of suffering and loss. What should the believer do when God’s good gifts are either withheld or taken away? The temptation may be to try to soften the blow by devaluing the gift. The less precious the gift, the less its loss means. But Rigney insists that this is not the way forward. Paul’s promise that “this light and momentary affliction is preparing for us an eternal weight of glory beyond all comparison” (2 Cor 4:17) is not intended to minimize earthly suffering, but rather to maximize the glory of heaven. Like more enjoyment of pumpkin crunch cake makes Christ’s goodness sweeter, so the heavier the weight of loss in this world, the greater the weight of glory it is preparing for us. This, too, is a pedagogue.

By teaching us to enjoy God by enjoying his creation—to read in creation its essential inscription that bespeaks the glory of God, Rigney is doing more than resolving an existential tension. He is turning us into pre-moderns who view the world not as a modernistic reduction of mere material, but as ubiquitous divine messaging. Do not be fooled by the absence of explicit language to the effect: Rigney wants us to become Medievalists, and we will all be the better for it.