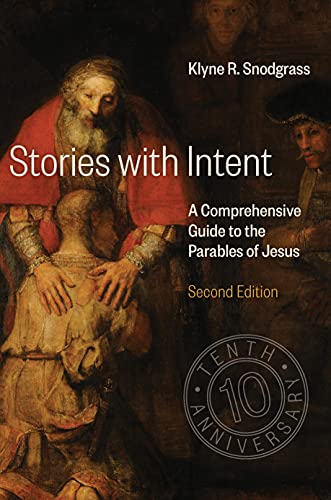 Stories with Intent: A Comprehensive Guide to the Parables of Jesus

This major work is mainly a study of the parables of Jesus themselves, introduced by two relatively brief introductory chapters, and concluded with 279 pages of appendices, notes, and indices.

The first chapter sets the scene, discussing the nature of parables: they are ‘stories with intent’. They need to be interpreted accordingly within the context of Jesus’ teaching and Jesus’ world. While recognizing that the parables have been arranged and shaped by the evangelists, Snodgrass is unashamed in his historical confidence that the parables have been faithfully preserved and give us access to Jesus’ teaching. He usefully discusses different types and then features of Jesus’ parables: this is helpful and insightful, even if his comment that ‘a few … may have christological reference’ seems less than generous (p. 20); arguably most of the parables are directly or indirectly christological. He discusses ‘How Should Parables Be Interpreted’, giving eleven very useful guidelines. Among other things he reminds us that Jesus’ parables will have been repeated frequently in different contexts and with variations; he warns against overinterpreting details and against scholars’ attempts to extract the parables from their gospel contexts and to reconstruct hypothetical originals. He vigorously rejects the view that parables cannot be interpreted!

The introduction is clear and to the point, and compared to the whole book it is brief. It does not attempt to say everything or to give a history of the interpretation of parables, but it (with the extensive footnotes) makes all sorts of pertinent points well. I like the author’s robust rejection of various widely held views, as well as his adapted quotes on parables as ‘imaginary gardens with real toads in them’ (!), and on parables as indirect communication that ‘finds a way in a back window and confronts what one thinks is reality’ (p. 8). The second chapter looks at parables in the ancient world, showing that Jesus’ parabolic teaching was not unique, but that there is no evidence of anyone who used parables so much and so well as Jesus.

Snodgrass looks at the parables under the following headings: grace and responsibility; parables of lostness; the parable of the sower and the purpose of parables; parables of the present kingdom in Matthew 13, Mark 4, and Luke 13; parables specifically about Israel; parables about discipleship; parables about money; parables concerning God and prayer; parables of future eschatology. In discussing each of the main gospel parables, the author looks at the form of the parable, at issues requiring attention (e.g., is this parable authentic teaching of Jesus? Does it teach works-righteousness?), at helpful primary source material (i.e., OT and NT material that may relate, Jewish writings, Greco-Roman writings). He then looks at textual features (e.g., how the parable fits in its context) and at cultural background. This leads into the most important and extended section, where he explains the parable and addresses the issues it raises. He then has a brief discussion of how the parable may be applied today and suggestions for further reading.

The book is a model of clear and sane discussion and a great resource. He explains scholarly views succinctly and well, offers persuasive criticism where this is in order (of liberal and more conservative scholars), and is equally persuasive in most of his own explanations. He is a good guide around the teaching of Jesus, and his comments about ‘adapting the parable’ for today are brief but helpful.

It is not possible to describe all or even many of his conclusions. He reflects usefully on the difficult sayings of Mark 4:10–12, seeing the key in the prophetic words of Isaiah 6:9–10: Jesus sees a correspondence between his ministry and Isaiah’s hyperbolical and challenging description of the people’s hardness of heart. Mark does not see Jesus’ parables as designed to prevent hearing, but they do both hide and reveal: they seek response, but ‘where there is no response the message is lost’. Snodgrass finds the interpretations of the parables of the sower and of the tares to be genuine teaching of Jesus. He guides us with a sure touch through the minefield of the parable of the unjust steward, rejecting attempts to whitewash the steward and seeing the parable as an urgent call to practical discipleship, especially in relation to the use of money: ‘the church should … demonstrate by its use of the money the reality of the gospel’ (p. 418). The parable of the rich man and Lazarus is not a literal or detailed portrayal of the afterlife, but it is real judgment and about the seriousness of just relationships. Snodgrass comes over as a little uncomfortable with the parabolic pictures of judgement, but he affirms the importance of the theme. He argues that parables such as the good and bad stewards, the talents, and the wise and foolish virgins do refer to Jesus’ parousia (not to some more immediate coming as suggested by Tom Wright, nor to the coming of God if this is distinguished from the parousia). He differs from many scholars in arguing that the parable of the sheep and goats is about compassion broadly conceived, not just about mission or the response to the gospel. The parable does not teach justification by works, but ‘We cannot separate our relation with God from our relation with people. To experience the compassion of God makes one a medium of compassion.… For those in Christ the origin and recipient of every act is Christ himself’ (p. 562).

Even a book as big as this cannot do everything. It is (refreshingly) about Jesus, not about the history of scholarship, nor primarily about the evangelists. So far as the evangelists are concerned, the specific contribution of each is mentioned piecemeal rather than treated systematically. I suspect that Luke would have seen connections between the extravagant love of the enemy portrayed in the Good Samaritan and the extravagant love of the Father in the Prodigal Son and the forgiving love of Jesus on the cross towards his executioners and the repentant criminal. I am not sure that I agree with Snodgrass that all attempts to find Jesus mirrored in the parable of the Good Samaritan are ‘illegitimate allegorizing’ (p. 356), or that there is no justification for seeing the cross somehow reflected in the parable of the prodigal son, who is brought from death to life by his father’s undeserved love. I wonder if Paul is making such connections in Romans 5:8–10 and Ephesians 2:4–13. I wonder also if Paul understood the parable of the wise and foolish virgins as having something to say to the Thessalonians about those who have ‘fallen asleep’ in the Lord (1 Thessalonians 4), an interpretation that Snodgrass dismisses so far as Matthew and Jesus are concerned.

Snodgrass has an enviable grasp of the secondary literature on parables. He omits to mention my Parables of Jesus, which comes to many similar conclusions as his book, maybe because it is at a more popular level. The dissertation of Ramesh Khatry from Nepal on The Authenticity of the Parables of the Wheat and the Tares and Its Interpretation is another omission. But it would be unfair to Snodgrass to conclude a review on anything but a very positive note: this is an excellent book, not for the beginning student perhaps, but for anyone wanting a highly informed and trustworthy guide to the most important stories ever told.