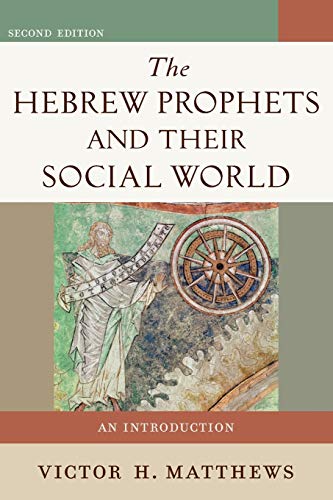 SOCIAL WORLD OF THE HEBREW PROPHETS

The OT prophetic books often intimidate modern readers who intuitively sense that this literature comes from a far distant time and place. Many desire to understand the prophets, but are often frustrated in their attempt to do so because of the geographical, temporal, and cultural barriers that seem to defy interpretation of such ancient literature. In this volume Victor Matthews, professor of religious studies at Southwest Missouri State University (USA), attempts to bridge this gap for readers. Convinced that one cannot understand the prophets’ messages without an appreciation of the context in which they lived Matthews discusses their historical and social background. He also addresses the literary dimension of their messages, for the prophets utilise a variety of images that reflect their cultural environment.’ His volume is geared for students, not specialists, and is best utilised in introductory college level courses on the prophets.

Matthews begins by surveying the historical geography of the ancient Near East. The discussion is clear, but would be enhanced by the inclusion of some maps. One wonders of this chapter is even needed, since it duplicates information that can be readily found in any good Bible atlas.

He then attempts to define and describe the OT prophets. The survey is useful and insightful, but there are unfortunate gaps in the discussion. In the section entitled ‘the truthfulness of the prophet’s message’ (30–31), some recognition of the functional (or performative) and contingent dimensions of prophetic language is absolutely vitai, but missing. He simply introduces the issue of ‘the reinterpretation of prophecy’ in one brief paragraph without providing adequate illustrations of his point (37). His assertion that the NT use of the prophetic literature does not necessarily reflect the prophet’s original intention is certainly true, but without elaboration and illustration it is liable to confuse, frighten, or even upset readers who are just beginning to wade into the waters of biblical hermeneutics.

Chapters 3–5 survey prophetic activity in Israel prior to the writing prophets, including Moses, Balaam, Samuel, Nathan, Ahijah, the unnamed ‘man of God’, Elijah, Micaiah, and Elisha. One wonders why Deborah, who played such an important prophetic role in the battle against Sisera’s Canaanite forces (Judg. 4–5) is omitted.

The remainder of the book (chs 6–14) is devoted to the prophetic books per se, which Matthews treats in chronological, not canonical, order. Matthews accepts the modern critical consensus on several issues. He divides the Book of Isaiah into three parts, placing chapter 40–55 and 56–66 in the chapter entitled ‘Postexilic Prophecy’ (81, 144, 153), and opts for a second century BC dating of Daniel, as well as pseudonymic interpretation of the book’s visions (168–70). Some evangelicals will find this troublesome, especially in an introductory volume designed for student use.

In these chapters Matthews attempts to illuminate the metaphors and cultural customs alluded to by the prophets. His discussion of the parable of the vineyard in Isaiah 5:1–7 (84–88) is especially helpful and illustrates nicely what he is attempting to do in the book. He shows how an awareness of ancient Israelite agricultural practices helps one appreciate more fully the message of this passage. On other occasions, unfortunately, the discussion is more abbreviated and does not achieve this same level of depth and insight. Sometimes gaps are apparent, for example, in his treatment of Amos 3:15 Matthews simply mentions the houses ‘decorated with ivory’ without incorporating the archaeological and inscriptional evidence that illuminates the reference to summer and winter houses.