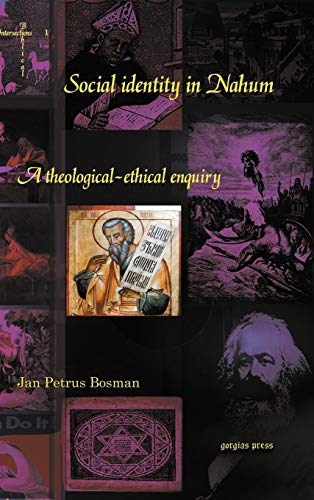 This timely volume began as a ThD dissertation completed at the University of Stellenbosch (South Africa) under Hendrick Bosman in 2005. Writing with sensitivity to social identity and its role in conflict and to his position within the theological tradition of the Dutch Reformed Church in South Africa, Bosman brings Nahum’s message to bear on the question how “texts form and legitimize an ethos whereby eliminating the ‘other’ (for example, through avoidance, apartheid laws or destruction) is not seen as wrong, bad, or evil, but fits into a coherent scheme of how the world of right and wrong is structured” (p. 3). Specifically, he wishes to ensure that “something like apartheid will never happen again” (p. 6). The author’s approach brings together literary, social-scientific, and ideological-critical methods (with a tip of the hat to Thomas Kuhn’s contention that paradigms of knowledge are routinely razed rather than refined [p. 21] and Louis Jonker’s development of a “multidimensional” approach to interpretation [pp. 23–25]) to provide a robust reading of Nahum and an exploration of its significance.

Bosman argues that Nahum’s treatment of social identity, which is foundational for its ethic, “points away from ethnocentrism and exclusiveness” and is instead “responsible and liberatory” (p. 17). Bosman addresses the question whether to see Nahum as the accretion of various authors’ work (a diachronic approach) or as the work of a single author with consistent intentions, assumptions, and so on (a synchronic approach) by assuming that the redactors of a given prophetic book both contributed to it as authors and transmitted an unspecified portion of the earlier material they had received (pp. 39–41).

Bosman establishes his method for determining Israel’s identity in Nahum (which integrates religious, political, national, and ethnic elements, with religious identity being preeminent, ch. 3) and for reading Nahum (ch. 4; he favors approaching it as a unity “containing beautiful but theologically terrible poetry,” p. 113) before undertaking a careful reading of that book, which includes commentary on the Hebrew text and exegesis of selected portions. He dates 1:9–14 and 2:2–3:19 to the pre-exilic period and 1:2–8 and 2:1 to the exilic/post-exilic era (chs. 5–6), and he concludes that the pre-exilic material in Nahum “seeks to change the status quo of oppression and reacts against the . . . ideology that threatens [the group’s] existence as a Yahweh-Alone group in Judah” (p. 174). On his view, this material functions cathartically while fortifying that group’s solidarity. In the post-exilic material, much remains the same, but some elements show development, as when those excluded are referred to more universally in this later material (e.g., “enemies” instead of “Assyria”). This corresponds with what Bosman finds characteristic of Deutero-Isaiah (Isa 40–55), which he believes reflects the views of an exilic group that understood Cyrus’s rise at the end of Judah’s exile as evidence that “the time of judgment had passed and that Yahweh would usher in a new period of salvation” (p. 181).

Bosman brings Nahum’s message into the present by integrating John Barton’s view of “natural law” (in Barton’s words, “an accommodation of human action to principles seen as inherent in the way things are” [p. 237]) with other approaches. The author (with reference to N. Gottwald) sees a plurality of ethics in the OT, and believes that the contemporary evils of violence and oppression justify his choice of “responsibility” toward the other as the highest good (pp. 243–46, following E. Levinas). Ethics that are “more just and ethical” than those found in Nahum must be pursued (p. 249).

Bosman’s belief that the text of Nahum refers not merely to its authors’ beliefs, but to an extra-textual reality (p. 21), his willingness to wrestle with the whole book of Nahum rather than ultimately contenting himself with breaking it into parts, and his desire to articulate its message in contemporary contexts make his work a valuable one, and one hopes that such interpretative efforts will continue to gain influence. At the same time, the volume raises a few issues that it could have treated more thoroughly. First, Bosman’s “and-and” solution to the prophet-or-redactor question concerning authorship does not fully appreciate the difficulty of determining what elements in a book reflect the original author’s composition and what have been autonomously added by redactors. The presence of multiple and competing voices in a text effectively puts the reader in a position of determining what belongs and what does not. A similar movement toward the reader’s autonomy may be present in Bosman’s eclectic ethical paradigm in which most of Nahum’s message is objectionable as an ethical guideline for believers (e.g., the feminine imagery in 3:5–6; the use of the “same ideology as their persecutors” to describe Assyria’s fall [p. 250]). Second, while recognizing a connection between Nahum’s ethics and theodicy, Bosman almost entirely avoids mention of the Day of the Lord as the (future) resolution of the evil that so troubles Nahum. Similarly, the author recognizes the interrelation of social and religious identity (p. 191), but treats 1:8 in predominantly social categories despite the absence of such elements from that verse (pp. 200–201) and his recognition elsewhere that Nahum focuses on Yahweh as the one who will execute justice (cf. pp. 192–93). A fuller appreciation of God’s unique role ushering in final righteousness would greatly allay Bosman’s fear that Nahum might be misused to authorize the violence of one group against another (p. 254). As it is, references to the NT are extremely rare in the book, which is surprising given the author’s Protestant self-awareness.

Two complaints as to the book’s form: Scripture and author indexes would greatly aid readers, and while the work itself is both coherent and well-written, better proof reading on the publisher’s part is sorely needed (e.g., witness the message after a heading on p. 248 and a blank page in the middle of a chapter [p. 19]).

Bosman’s wide reading, clear writing, and integration of multidisciplinary insights makes this work scintillating and enriching. Even if my critiques are justified, there is enough valuable material apart from them that we can look forward to further work from Bosman and others writing with similar aims.