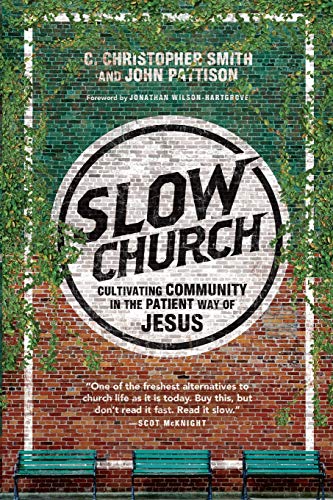 Slow Church: Cultivating Community in the Patient Way of Jesus

Supersize Me is a documentary that follows director Morgan Spurlock on a 30-day journey during which he only eats at McDonalds. The documentary portrays the horrific effects that an all-McDonalds diet has on Spurlock’s physical and psychological well-being and explores the idea that fast food is highly to blame for America’s health problems. In essence, Supersize Me challenges Americans to open their eyes to see the destructive nature of fast food. In Slow Church: Cultivating Community in the Patient Way of Jesus, C. Christopher Smith and John Pattison make a similar challenge. They invite American Christians to open their eyes to see the destructive nature of “fast church.” When the church embraces “fast church” the results are similar to when people eat fast food; they become lethargic and sick. Sadly, though, the church has developed a taste for “fast church.” According to Smith and Pattison, the church needs to change its “diet” and begin to embrace a slower way of doing church.

The authors argue that the American church has been co-opted by the allure of the fast life, what some sociologists have termed “McDonaldization,” that is “the process by which the principles of the fast food restaurant are coming to dominate more and more sectors of American society” (p. 13). The fast life is busy, controlling, stressed, superficial, impatient, and marked by quantity over quality (p. 13). Slow is the opposite: “calm, careful, receptive, still, intuitive, unhurried, patient, reflective, quality over quantity” (p. 13).

Slow Church explores what it would look like for the church to embrace the slow way of life. The authors do this by dividing the book into three sections: ethics, ecology, and economy. The first section, “Ethics,” looks at what it looks like for a church to be the embodiment of Christ in a particular location. The second section, “Ecology,” examines the church’s place within God’s mission of reconciliation. The third section, “Economy,” focuses on the way God has provided the local church with the necessary means to carry out His reconciling work in the world.

Within the “Ethics” section, Smith and Pattison argue that a church that takes its social location seriously is committed to a particular place over time and is committed to developing the patience necessary to bring healing and reconciliation to a broken world. This church stands in contrast to a church that has bought into the McDonaldization paradigm.

Throughout the “Ecology” section the authors develop the argument that Western culture has bought into the myth of fragmentation. However, Scripture affirms that creation is an interdependent whole, created by God, sustained by Christ, and reconciled by Christ’s work on the cross. According to Smith and Pattison, the church—much like the rest of Western culture—tends to buy into this myth. The result is different forms of fragmentation, most prominently the fragmentation of faith and work.

The authors conclude with the “Economy” section. Here they make a case for an economy of generous sharing rooted in God’s abundant provision for creation and, most importantly, God’s greatest act of generosity, “the death and resurrection of Jesus which brought us into the family of God” (p. 201).

Smith and Pattison ought to be commended for several excellent features of this book. First, it is clear that their vision for slow church is rooted in a holistic gospel. They begin with N. T. Wright’s five-act version of the biblical drama: creation, fall, Israel, Jesus, and the church, and they emphasize that God in Christ is effecting the full reconciliation of creation. Rather than settle for a small gospel that equates the gospel with justification by faith they present an all-expansive gospel in which God through Christ is dealing with the effects of human sin, individually, communally, and cosmically. Because their understanding of the gospel is individual, communal, and cosmic, they are able to see the implications of the gospel upon every area of life. Second, this book provides a much-needed corrective to cookie cutter approaches to church. Their primary targets are churches that uncritically have bought into the McDonaldized paradigm of efficiency, predictability, calculability, and control. These churches “have come dangerously close to reducing Christianity to a commodity that can be packaged, marketed and sold” (p. 14). Instead of simply critiquing these churches, however, the authors stoke the reader’s imagination for another way of doing church by providing the reader with plenty of examples of churches who are doing “slow church.”

Although there are many excellent aspects of this book, some of their arguments may be self-defeating. For instance, throughout the book they often take jabs a megachurches as the primary culprits of a McDonaldized approach the church. Supposedly these churches have completely ignored the social location of their congregation and have attempted to apply a cookie cutter approach. According to the authors, megachurches are guilty of ignoring the indigenous nature of the church. However, I wonder whether the megachurch is actually the indigenous form of church for certain locations. Also, one must wonder what to make of their accusation that the McDonaldization of the church is an instance of the church uncritically buying into a new cultural trend. One could say the same thing about “Slow Church,” which uncritically buys into the Slow Food Movement. To be sure, there are positive aspects of this movement, yet one wonders if the authors have overlooked the negative aspects of the movement.

Overall, Smith and Pattison do a fantastic job presenting an imaginative vision for what the church could be if it chose to reject the fast and McDonaldized values of our culture and exchanged it for a more intentional, organic, communal way of being God’s people in this world.