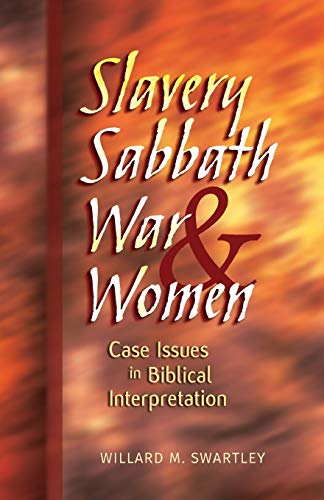 ‘Appeal to the Bible does not in itself guarantee correctness of position.’ So asserts Willard Swartley and to back this up he illustrates four areas where appeals to Scripture have reached differing and contradicting conclusions. This book, which comes from the 1980 Conrad Grebel lectures, is a case-issue approach to biblical interpretation. It describes how different interpretations on the issues of slavery, sabbath, war and women have arisen, then offers a comparative hermeneutical study, and goes on to propose a model of appropriate understanding of Scripture. There is no formal treatment of inerrancy, infallibility, inspiration, for that would not settle matters according to Swartley.

Slavery is dealt with in the form of a debate focusing on works written between 1815 and 1865. Swartley seems to assume a unanimity among his readers that slavery is evil, and so regards this as the safest place to start. Swartley says the abolitionists gave priority to theological principles and basic moral imperatives which carried greater weight ‘than specific statements on a given topic even though the statements speak expressly to the topic under discussion’. This is a recurrent emphasis, though quite what these principles and imperatives are, and how they are derived, and what relationship they bear to statements in the text of Scripture, is not explained to us, and so remains perhaps the book’s biggest weakness.

War is clearly the theme Swartley feels most keenly. He warned us at the outset about his pacifist bias, and though he tries to give non-pacifists a fair crack, quoting extensively from various writers and being careful not to lump different emphases together, his preference is very plain. Consequently he states some matters with a brevity because the point seems obvious to him, but it is not obvious to all, for instance his linking the doctrine of the atonement with pacifism.

The chapter on women disappointingly focuses on the ordination issue and does not consider issues such as language and the alleged patriarchal bias of theology as maintained by Daly, Fiorenza, Reuther amongst others.

One of Swartley’s main points is that there is a diversity of views in Scripture. Furthermore it is not an even book—some parts carry more weight than others (he is repeatedly critical of what he calls the flat-book approach of fundamentalism), yet the existence of a canon is an indication that there are limits to the diversity (p. 189), and Swartley is hopeful that the Bible can speak with some clarity on social issues. He gives six instances of how people use the Bible for social issues, concluding that the church, to be faithful to Jesus’ call to be salt and light, must seek to use the Bible in social issues.

In the fifth chapter he compares issues raised in the various case studies, offers principles for understanding Scripture and gives us his proposed method, which is that we should (a) listen carefully from within the text (observation); (b) learn helpfully from behind the text (meaning); (c) live freely in front of the text (significance).

Swartley covers a lot of ground in this book, though his conclusion is not startling, but the case-study approach might encourage some to reflect on many important hermeneutical issues he raises such as diversity in Scripture, relationship between OT and NT, context, and so on. In particular some people who would not think of picking up a textbook on hermeneutics may find this approach helpful. Swartley offers suggestions for group study and certainly some church groups could benefit from this work being studied. His tendency to present lists throughout the book makes it more suitable for study in sections rather than a straightforward reading of the text. For this reviewer its style was too reminiscent of a telephone directory.

Too little has been provided for the non-specialist on the subject of hermeneutics—we are grateful for this contribution which if used well will help us use the Scriptures more intelligently and faithfully in answering many important questions which need to be addressed.