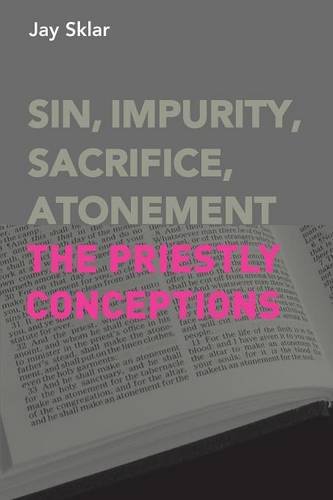 In this well argued monograph, Jay Sklar addresses an impasse in contemporary research on sacrifice in the Bible, and advances the thesis that sacrifices of atonement (kipper) effectively address both sin and impurity. In contexts of sin the result of the kipper-rite is forgiveness, with an element of purgation; while in contexts of impurity, the result is purification, or consecration, with an element of ransoming. The reason for this dual function of the kipper-rite is that inadvertent sin and major impurity share in common the property of endangering (thus requiring ransom) and polluting (thus requiring purgation). The power of the kipper-rite to accomplish this lies in the lifeblood of the sacrificed animal.

The book is divided in four parts. Part I (chapters one to three) deals with the verb kipper in sin contexts. Here Sklar advances the thesis that in such contexts the verb refers to the effecting of a kopher on behalf of the guilty party, while also including elements of purification.

In Part II (chapter four), Sklar discusses kipper in contexts of impurity (effecting purification and consecration), demonstrating that the verb has an element of purification in such contexts. Nothing that kipper occurs only in the context of sacrifice, he suggests that sacrificial blood is essential to the meaning of the verb in purification contexts, and that an element of kopher is also involved, in such kipper-rites.

Part III (chapter five) brings together the conclusion of the first two parts of the book and considers how the contexts of sin and impurity are related to one another. After surveying some important recent contributions he concludes that the kipper-rite refers to a kopher-purgation, in other words, it purges both sin and impurity by means of a blood sacrifice (kopher arrangement).

Finally, Part IV (chapter six) moves to a more detailed investigation of Leviticus 17:11 in order to address the question of why is the kipper-rite able to fulfil both kopher and purgation. Sklar’s answer is that the blood of the animal that is sacrificed in the kipper-rite contains life and in the priestly theology life-containing blood both ransoms and purifies. This observation deepens and clarifies the insights achieved in chapters three and four.

The strong connection between sin and death in the priestly literature is well known, but Sklar clarifies more precisely how sacrificial atonement (kipper) deals with sin and averts death for the sinner. Particularly helpful is his treatment of the vocabulary of sacrifice. In his discussion of the noun kopher, for example, Sklar curbs the limitations of a purely concept-oriented approach—that is observing all the texts where the noun occurs—by combining it with a field-oriented approach, comparing and contrasting the noun with two roots the same semantic field. By doing so, he not only offers helpful observations on how to better translate the term (he suggests ‘ransom’ and ‘appeasement’), but also solidly establishes the relationship between the terms kipper and kopher.

The book’s main value lies precisely in this combination of judicious treatment of the literature with insightful linguistic analysis, all skillfully woven together to compose the overall argument. Sklar’s work certainly moves the discussion on the meaning of kipper further, and it is a very valuable source for all who are interested in a deeper understanding of the meaning of sacrifice in the Bible.