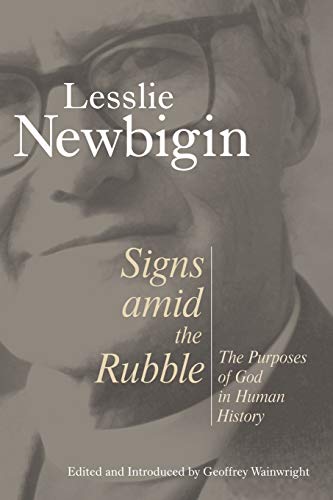 SIGNS AMID THE RUBBLE: THE PURPOSES OF GOD IN HUMAN HISTORY

The literary legacy of the missionary bishop and theologian Lesslie Newbigin (1909–98) continues to grow. This is good news because his work repays close study, not least by evangelicals. His central convictions about the gospel as revealed truth; the priority of evangelistic proclamation; the uniqueness of Jesus; and the need for gospel-driven engagement with contemporary culture provide both direction and challenge to all who seek to engage in contemporary mission. So enthusiasts of his work will be delighted with the labours of Geoffrey Wainwright in compiling this latest collection of hitherto unpublished material from the Newbigin archives. Not only this, but newcomers to his thought should also find this book both accessible and thought-provoking.

The material spans 55 years of Newbigin’s literary output, and is made up of three sections. Firstly—and surely of greatest interest to Newbigin scholars—is an early set of four lectures given at United Theological College in Bangalore, India in 1941 adressing the theme ‘The Kingdom of God and the Idea of Progress’. Secondly, there are three ‘Henry Martyn Lectures’ given in 1986 at Cambridge University on some broad themes concerning the relationship between ‘gospel’ and ‘culture’. Finally, there are two fascinating contributions given (almost impromptu) by Newbigin in the course of the ‘World Conference on Mission and Evangelism’ at Salvador de Bahia, Brazil, in December 1996.

There are many points of interest in the collection, but the inclusion of the 1941 lectures in particularly significant. By Newbigin’s own reckoning these lectures represented a first attempt to put into coherent form some substantial themes that were to occupy him for the remainder of his life, and they are fascinating as a foretaste of what was to come. Here we see (from a 32 year-old Newbigin!) a kind of ‘overture’ to many of his later themes: in particular the critique of secular models of ‘progress’ and an early exploration of the dialectic between a Christian conception of the kingdom of God as a future eschatological reality, and its present manifestation in the life of the church in the world. Characteristically, Newbigin draws wide-ranging implications both for political involvement and missionary engagement.

It is the sense of continuity that most struck me as I read the other two contributions delivered around half a century later. The 1986 lectures prefigure much of his later ‘missionary encounter’ material, but the dominant theme that emerges again is a discussion of the relationship between the ‘future’ and ‘presence’ of the Kingdom. This dual aspect of the Kingdom enables Newbigin to critique both ‘this-worldly’ misunderstandings of mission which do not adequately embrace the future certainty and completeness of the Kingdom, as well as ‘other-worldly’ misunderstandings in which Christians effectively disengage from present involvement in the social and political life of our Culture.

The two 1996 pieces (delivered a little over a year before his death) demonstrate right to the end Newbigin’s continuing and passionate commitment to both engagement and proclamation. Once more, one is left with the sense that it is this lifelong grappling with the implications of the appearance and future certainty of the Kingdom (with its promise, coming judgment, and obligation to tell others) that lends Newbigin’s work its continuing prophetic character.

Though in one sense an historical collection, this book shows just how contemporary Newbigin’s challenge remains. I warmly recommend it—to newcomers and enthusiasts alike.