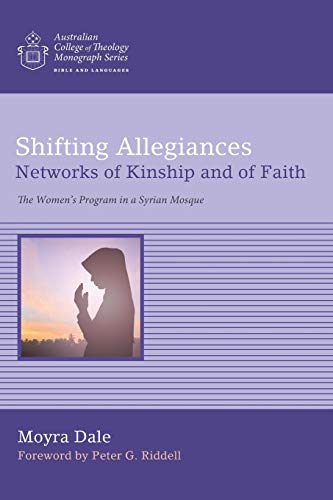 Shifting Allegiances: Networks of Kinship and of Faith: The Women’s Program in a Syrian Mosque

Moyra Dale presents the findings of her Melbourne School of Theology doctoral thesis in Shifting Allegiances: Networks of Kinship and Faith: The Women’s Program in a Syrian Mosque. She provides a detailed ethnography of a particular women’s mosque movement in Damascus, Syria. It serves as a periscope into the wider mosque movement among women within contemporary Islam. Through participant observation, note-taking, and recorded interviews, she collected data while attending events that were part of a women’s program at a Sunni mosque in Syria from 2005–2007, just a few years prior to the outbreak of Syria’s civil war in 2011.

Women scholars are not new in Islam. In recent decades, worldwide growth in women’s education and access to religious materials have empowered women to redefine their personal identity. Traditionally, Islamic virtues are passed on within family and kinship networks. As Dale states, “Family, rather than friends, are the principal arbitrators of behavior and values (for women)” (p. 3). Her work asks two primary questions. First, what is the nature of an allegiance shift strong enough to move women away from traditional loyalties to kin, obedience to government, and conventional norms concerning female piety and docility? Second, how might this new allegiance reshape one’s community, the ideal leader, gendered ways of being and doing, reading and understanding of religious texts, and a person’s understanding of God?

The early chapters provide a basic understanding of research context and methods used. The remaining chapters examine three primary elements: the movement of women into what has traditionally been men’s space, women’s ability to read and teach sacred Islamic texts, and the learning and personal application of those texts to their lives. Dale’s research is meticulous and well-supported. In addition to performing all research in Arabic, she invited feedback from the program’s founder and leader, Anisah Huda, as well as input from attendees. She also draws widely from other scholars familiar with the Islamic revival among women. Her bibliography is a rich resource to readers.

Dale’s ethnography offers fascinating insights into a shift in honor paradigms among Muslim women. Modernity has allowed women to disentangle themselves from the constraints of traditionally dictated honor within the family. Therefore, women take risks to find honor from a different source: the ummah, or imaginary larger religious community, made physical and real in the mosque space. Women shamed by their families for attending night classes at the mosque have found new honor as readers and interpreters of sacred texts in the women’s mosque programs. In the kinship tradition, honor practices and behaviors are gendered: women bear the burden of honor bodily and socially. However, in the mosque community, honor practices and behaviors are more closely tied to the prophet Muhammed. He becomes the standard by which they interpret personal honor and apply it to their family and social roles.

Historically, men typically conduct mosque lectures and teaching involving women, family, and marriage. They use texts interpreted by men. In Huda’s mosque program, women teach other women, interpret sacred texts, and applying it to their lives. This gendered shift is one of the most striking observations found in Dale’s work. Faith has previously been primarily defined in male terms by male authority. In the Garden Mosque of Damascus, women redefined their faith in the context of their everyday lives and relationships. Huda’s teaching continually emphasized the importance of knowledge. She states, “Muhammad said learning is better than worship” (p. 155). Huda taught that when students learn their rights and responsibilities as Muslim women, they are no longer just members of their extended family but also of their greater ethnic groups. Through self-examination and knowledge, women are in a stronger position to handle life issues.

At one point, the students controversially and courageously released a CD of women singing religious songs. In a group, one voice could not be discerned above the rest. Traditionally, women’s voices are part of their ‘awrah, that which is indecent to reveal, as they can evoke temptation for men. By creating a female choir recording, the women exhibited astute manipulation of traditional piety rules so that their voices might still be heard while simultaneously masking individual voices. The book says little about the response of men and the wider community to the women’s program. Did the women’s reinterpretation and application of texts effect change? How did the women’s program impact the community? Did it help them within the contexts of kinship and family?

Shifting Allegiances is not for the faint at heart. The use of specialized anthropological language and paradigms makes the reading laborious at times for non-specialists. However, Dale’s conscientious and thorough study of the Islamic revival among women is an invaluable contribution to understanding the wider mosque movement within contemporary Islam. Given the extreme changes in Syria since the time of Dale’s research, her findings leave us with many questions. How did those years of learning impact the women who were later displaced? Have they found it easier to survive spiritually in the greater ummah after being torn from their communities of kinship and family? And, notably, how does this movement place these women in a posture of preparedness for hearing the gospel of Christ?

Dale does not provide direct applications for the Christian working among Muslims, but much can be drawn from her observations. Muslim women are seeking community outside traditional kinship and family groups, increasing their knowledge of sacred texts, and pursuing a greater understanding of God. Christians can invite them to find connection in Bible study groups, Christian women’s fellowship groups, and church. We can engage women in studying biblical texts and examine how they apply to life issues of life. Of course, we should share how Jesus restores honor to women and acknowledges their value. Dale’s work shows us women who want to know God for themselves and ways we can help them find him.