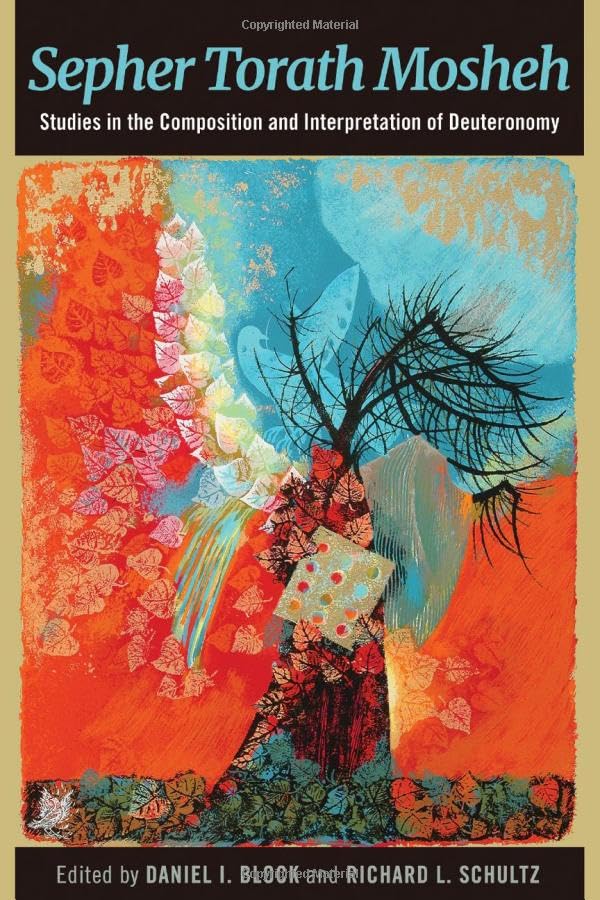 Sepher Torath Mosheh: Studies in the Composition and Interpretation of Deuteronomy

Deuteronomy has long held a privileged position within the OT guild. Ever since Wilhelm de Wette’s contention that the book’s provenance is best connected with Josiah, Deuteronomy has offered historical critics an anchor point to ground compositional models—not only for the Pentateuch but also for the Former and Latter Prophets. Evangelical responses to such reasoning have not always been magnanimous. In fact, there has been a noticeable divorce between evangelical scholarship and the wider academy. Sepher Torath Mosheh, edited by Daniel Block and Richard Schultz, is an attempt at rapprochement.

The volume’s opening chapter by Peter Vogt establishes the broader interpretative landscape. Differing critical approaches to Deuteronomy are surveyed as a means of contrasting evangelical responses. Vogt concludes that while evangelicals have historically tended to be reactive rather than proactive (p. 22), a “more confident and assertive evangelical cadre” is beginning to turn the tide (p. 29). The current volume is a case in point. Thirteen evangelical scholars engage with, affirm, and critique critical readings in their respective attempts to grapple with the text and theology of Deuteronomy. The result is a compelling showcase of the potential.

Three chapters explicitly consider historical matters. Two examine the connection between Deuteronomy and ANE treaties. Neal Huddleston presents a forty-eight-page survey of seven ANE treaty forms extant from 2300 to 600 BC. This survey serves as data for a subsequent essay, co-written with Lawson Younger, which critiques conclusions drawn from comparative analyses. Younger and Huddleston note an all-too-frequent “violation” of documents that only considers superficial similarities, not the contrasts (p. 95). They conclude that Deuteronomy draws from a broader cultural milieu rather than one specific ANE treaty form (p. 109). A third chapter by Sandra Richter presents data from recent archaeological digs at Mount Ebal and Mount Gerizim. Richter argues that this locale—ancient Shechem, the highest peak in the most densely populated region in Canaan—was the ideal place to announce the rule of a new sovereign, namely YHWH (Deut 27; p. 310). Accordingly, she proposes that the first instantiation of the ambiguous “place of the Name” announced throughout Deuteronomy was Ebal/Gerizim (p. 337).

Two back-to-back essays by Michael Grisanti and Bill Arnold tackle compositional issues. Grisanti charts the development of the critical consensus that links Deuteronomy with Josiah (pp. 111–18), presents counter evidence (pp. 119–29), and considers alternate proposals (pp. 130–38). He concludes that Deuteronomy was primarily composed by the end of Moses’s life (p. 138). Arnold’s essay heads in a different direction and, as it does so, considers an evangelical touchstone: inspiration. Eschewing both the traditional thirteenth-century date and a late Josianic provenance, Arnold opts for a middle position. Drawing on Michael Fishbane’s distinction between traditum and traditio, he suggests that Deuteronomy is best understood as a corporate product—that is, as a scribal recasting of Mosaic tradition designed to perpetuate the text faithfully for a new generation (pp. 150–53). This, he argues, is more consistent with what we know of ancient text production. These two chapters illustrate the conversation captured by this volume—contributors do not see eye-to-eye on all points. Readers are thus inducted into a lively, yet cordial, discussion.

A contribution by Brent Strawn explores the rhetoric of Deuteronomy. Strawn notes how the use of self-involving language (“we” and “you”) positions the audience as rescued slaves and as recalcitrant rebels, forcing a point of decision (pp. 183–84). This, in turn, bequeaths a “transhistorical effect” to the book, involving readers wherever and whenever they might be (p. 184, emphasis removed). Importantly, readers are engaged as both slaves and rebels; one cannot simply elect a favored persona. Strawn concludes, “That is how Deuteronomy’s inscription works: writing the audience into the story’s most noble and ignoble moments for salutary ends” (p. 190, emphasis removed).

A further five chapters fruitfully apply intertextual analysis. Markus Zehnder reads Deuteronomy’s command to love the alien (Deut 10:19) against Leviticus 19:34. Richard Averbeck compares Deuteronomy with Exodus 21–23 and Leviticus 17–27 to argue for the presence of cultic frames around the various law codes. The presence of wisdom themes in Deuteronomy is explored by Gordon McConville. Carsten Vang assesses the long-noted textual overlap between Deuteronomy and Hosea and concludes that the direction of dependence presumed by critical scholars (Deuteronomy upon Hosea) is based more on undefended assumption rather than literary considerations. Finally, in an intriguing essay, Daniel Block ponders what Moses may have thought of Paul (p. 340), particularly in relation to Galatians and the matter of circumcision. Block concludes that Moses would likely have agreed with the apostle (p. 356), noting that in Deuteronomy “physical circumcision is never identified as an or the Israelite identity marker” (p. 358). For Moses, as with Paul, internal orientation (circumcision of the heart) remained central.

Sepher Torath Mosheh fulfils what it sets out to accomplish: a considered and proactive evangelical engagement with critical scholarship on Deuteronomy. The contributors are by no means uniform; diversity on multiple issues is apparent. Readers will therefore find material with which they agree and disagree. That, one suspects, is part of the point. The volume calls for and models serious engagement with the issues instead of retreat and reaction based on prior commitments. Students and researchers are amply served in this regard. At the same time, one cannot help wondering what critical scholars would make of the volume. Jeffrey Tigay was invited to attend the 2015 symposium that marked its origin. It would have been interesting to have his reflections included. Nevertheless, this remains an important volume which displays frontline evangelical scholarship at its best.