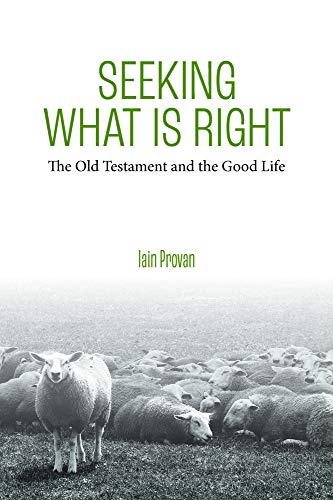 Seeking What Is Right: The Old Testament and the Good Life

This volume guides the audience to read the Bible deeply and accurately so that they can live a good life according to it. The book consists of three parts addressing issues concerning the “good life” as found in history and Scripture and several appendixes that provide resources for further study. Each chapter concludes with discussion questions to internalize the information and consider ways to live it out.

Part 1: Foundations includes three chapters. Chapter 1 introduces the concepts of the “good life” considering God’s character and his creation design as presented in Scripture and several historical documents. Chapter 2 examines what is meant by “Scripture” and ways people read it, especially the OT. Provan avers that both Testaments have authority over Christian life and demonstrate that being “good” means to imitate God in character and behavior (p. 27). Chapter 3 tells the story of the Bible from Creation to Revelation, focusing on the place of Israel and its Torah and the church and the NT in God’s relationship with his people (p. 43).

Part 2: Explorations investigates how Christians throughout history have understood the “good life” by reading or misreading the biblical narrative and how contemporary Christians should wrestle with ethical questions while searching and interpreting the Scriptures. Chapters 4 to 6 examine the claims of early ecclesiastical leaders and imperial rulers to establish a Christian kingdom and accomplish “a task of Christian salvation” by means of state policy, law, and violence. Provan believes that idealizing pagan kings/rulers as biblical heroes and their kingdoms as “a little short of the kingdom of God on earth” has resulted in misinterpretation and misappropriation of godly rule and Christians’ engagement with political powers (pp. 57–59), bringing about “apocalyptic purification theology” which sanctioned the Crusades (p. 98) and widened the gap between Christians and pagans, Jews, and Muslims.

Chapters 7 to 9 examine the church’s attempts to establish a godly society in post-Reformation Europe which regulated one’s sexual and marital life, employed capital punishment to subvert any opposition to Christian rule, and justified the violence of expansionist wars. Provan’s study of Scripture demonstrates that the church’s misreading of the OT passages on personal life, executions, and just war resulted in the unjust overreach of the church into the lives of both believers and unbelievers, causing pain and mistrust of Christianity. Provan believes that post-Pentecostal believers are called to a life of peacemaking and non-violence (p. 157) and the laws of Leviticus 18 on sexual relationships (p. 123) and Leviticus 20 on capital punishment do not apply to them (p. 138).

Chapters 10 to 12 investigate the overlapping of civil and ecclesiastical polities which shaped the order of society in the New World and Europe, particularly as they pertained to the matters of Sabbath observance, governance, and the institution of slavery. Having examined different types of government and their treatment of the people and the biblical story, Provan concludes that no government is best suited for Christians as they are called to seek the kingdom of God and obey their civil governments as long as seeking the good life allows it (p. 200). This makes overzealous observance of the Sabbath or imposition and support of slavery unacceptable Christian practices.

Chapters 13 to 15 discuss wrongful Christian practices by focusing on the vocation and rights of women, Christians’ views of Jews and Palestinians, and creation care. Provan finds no basis in Scripture to see women as lesser humans subordinate to men (p. 241) and identifies the historical treatment of women as “a shameful legacy” which robs the contemporary church of any credibility (p. 243). The historical misreading of the Bible concerning the restoration of Israel in the Holy Land has caused Christians to support the Israelis over against the Palestinians instead of loving both groups and being their image of God-bearing neighbors (p. 262). Additionally, a misunderstanding of what “dominion” over creation means has led to misuse of nature instead of co-laboring with God in his garden (p. 283).

Part 3: Conclusions invites readers to use a consistent approach to interpreting various ethical issues through the lens of Scripture to enable them to live good lives in counter-cultural or counter-endorsing ways (p. 289). Chapter 16 offers a recap of the biblical story and ways of understanding the role of the church in the world. Chapter 17 presents the author’s treatment of biblical ethics of creation care, abortion, suicide, and euthanasia. Chapter 18 discusses the very complex issue of gender identity. Chapter 19 portrays the dangerous landscape of the exile in which Christians find themselves now when they choose to oppose the state’s polity which goes against the biblical teachings, especially regarding sexual orientation and gender identity. Chapter 20 invites the reader to develop authentic Christian ethics deeply rooted in the story of God and his character to demonstrate to the post-Christian world what a good and godly life is and why it is important to embrace it rather than settling into the dominant culture (pp. 379–80).

This volume addresses several important issues which historically the church has failed to engage with from the perspective of biblical ethics. The book sheds light on the implications of misreading and misinterpreting Scripture. The author dedicates a lot of thought to the church-state relationship from the first to the eighteenth century. It would have been beneficial if he had discussed the contemporary situation between the two entities. In addition, one wonders why, having embraced 2 Timothy 3:15 as the guiding principle for viewing the Bible, the author still chooses to see some of the OT teaching as not applicable to Christians. It would have been helpful if Provan had identified contextual ways of reading these laws in a new reality rather than dismissing them.

Nevertheless, this book is a valuable addition to the field of Christian ethics and a source of enriching discussions on the “good life.”