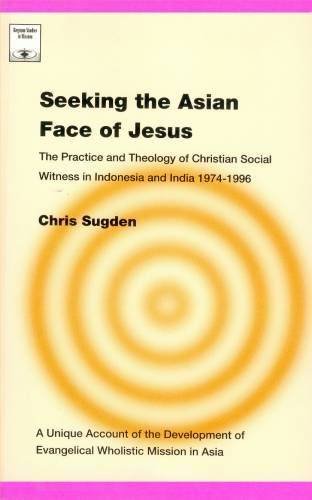 Seeking the Asian Face of Jesus

Seeking the Asian Face of Jesus is a critical and comparative analysis of two oustanding Asian missiologists, Vinay Samuel from the Church of South India and Wayan Mastra from the Protestant Christian Church of Bali, Indonesia. The book consists of two parts. The first, which constitutes two thirds of the book, was originally presented as a PhD thesis in 1988 and compares the approaches of Mastra and Samuel between 1974 and 1983. The second part is intended to bring the discussion up-to-date by detailing developments between 1984 and 1996. The reader should be aware though that this is done only with reference to Samuel. Only four lines are devoted to Mastra and Indonesia is not mentioned. The sub-title to the book is thus somewhat misleading.

In Part One the first four chapters are devoted to an analysis of Mastra’s missiology which is outworked on the Indonesian island of Bali, the only indigenous Hindu culture outside of South Asia. In his doctoral research Mastra critiqued the work of the Dutch Reformed missionary, Hendrik Kraemer, whose missionary strategy in Bali involved encouraging Christian converts to separate from a Balinese culture that was deemed irredeemably pagan. Mastra held that this demeaned Balinese dignity and sought a reformulation of the gospel that was appropriate to Balinese culture. Whereas Kraemer emphasised the discontinuity between non-Christian religions and Christianity, Mastra argues that the pre-Christian religious experience and perception of the Balinese is an indispensable tool with which to communicate the gospel.

In the following three chapters Sugden focuses on Samuel’s work of developing evangelical social theology in the south of India. He reveals that like Mastra, Samuel is also working from the key category of dignity, in particular towards the powerless and underprivileged. Samuel stresses the role of the church in establishing just structures in the areas of society, politics and economics. Again like Mastra, Samuel stresses the work of God outside the church and highlights the weakness of Western Evangelicalism to come to terms with the community aspect of Indian society.

The final two chapters of Part One contrast Mastra with Samuel and allow both to further critique Western evangelical theology. Sugden tackles the complexity of asserting transcultural truth from an intercultural reading of Scripture and reveals that Samuel is more concerned to relate Scripture to its original context whereas Mastra’s approach is more subjective, intuitive and over-determined by his context to the detriment of supra-cultural reality.

Part Two of the work draws together material from Samuel that has been presented in a large variety of contexts, giving a systematic description of the progression of Samuel’s thoughts between 1984 and 1996. The author is ideally placed for this since he has been colleagues with Samuel at the Oxford Centre for Mission Studies since his arrival in the UK in 1992. Themes here include economics (market economy, Micro-enterprise development), wholistic mission, contextualisation, the role of the Holy Spirit in mission (in response to recent emphases on power evangelism, spiritual warfare and the Toronto Blessing), modernity, post-modernity and hermeneutics.

The role of the Holy Spirit in mission is dealt with in four pages and herein lies a limitation to the book—namely that there is no discussion of the huge impact on missions brought about by the Indian Pentecostal denominations and no real discussion of the missiological emphases that they regard as crucial for the conversion of India. The author has followed his brief but the resultant omission is unfortunate.

In the final chapter entitled ‘Gospel and Community’ Sugden outlines Samuel’s reflections on the corporate setting of Christian existence in its urban, ecclesiological and familial contexts. Sugden has also produced a useful bibliography of Samuel’s writings which includes unpublished papers and lectures.

The footnotes are extensive (102 pp.) reflecting the original intention of the manuscript as a doctoral thesis. This work is not a light read and is not recommended for undergraduates who are coming fresh to the discipline of missiology. At times the book can be quite repetitive but the attentive reader will be rewarded with a detailed and comprehensive analysis of attempts to contextualise the gospel in the respective countries. This book will be illuminating to all who have an academic or practical involvement in missions to the Two Thirds world in general and India and Indonesia in particular.