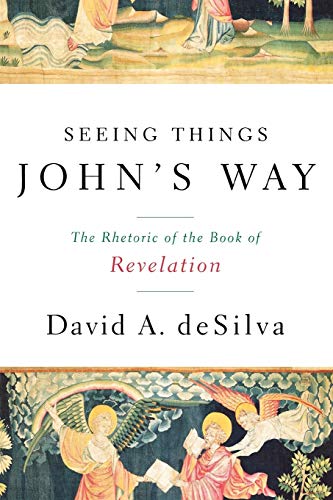 Seeing Things John’s Way: The Rhetoric of the Book of Revelation

Written by David A. deSilva Reviewed By Stephen B. Smith
New Testament

While virtually no one would quibble with the assertions on this book’s back cover that the last book of the Bible is “challenging and complex” or that deSilva offers “a provocative exploration,” some may wonder if it is too much to claim, “This volume will redefine the study of the book of Revelation.” However, a close reading will reveal that deSilva, professor of New Testament and Greek at Ashland Theological Seminary, is pushing research on Revelation forward in important ways and enabling his readers to add some significantly useful tools to their exegetical tool belts.

His first chapter begins with a survey of interpretive methodologies that groups the historicist, futurist, and preterist approaches together in reading “Revelation as a collection of predictions in search of fulfillment” and describes the idealist viewpoint as reading “Revelation as an allegory communicating timeless truths.” Over against these, deSilva opts for the “contemporary-historical” approach, which asks how John’s original audiences in the seven churches would have understood this writing.

DeSilva utilizes a rhetorical analysis of Revelation that studies how the author “has mobilized particular means of persuasion to a particular end or ends” (p. 14). Thus, this approach draws on the principles of classical rhetorical criticism from the handbooks contemporary with the time period when Revelation was written. DeSilva includes a helpful introduction that explains the methodology used by this approach and is careful to point out that a text such as Revelation must not be forced to fit any predetermined theory; the resources of classical rhetoric are to be used in a heuristic way rather than normatively.

Chapter two explains that the first step of rhetorical analysis seeks to determine the rhetorical setting addressed by the text. DeSilva gives a good overview of the social situations of the seven churches, emphasizing that that the diversity of their circumstances means that John is faced with more than one rhetorical situation. In regard to the debated question concerning the extent of persecution these churches faced, he notes, “Every reference to the outside world in the seven oracles involves hostility, antagonism, or social tension” (p. 53). While martyrdom may not have been the pervasive reality in the churches at the time John wrote, they had faced it in the past, and John anticipated that they would face it in the future as well (pp. 53–54).

Chapter three examines John’s rhetorical goals. In light of the multiple rhetorical situations of the seven churches, he uses multiple rhetorical genres. “Epideictic goals (continued adherence to cherished values) or deliberative goals (a call to desist from some course of action and/or embrace another course of action) may vary from locale to locale, even from hearer to hearer” (91). While the topics of forensic rhetoric are present, they are used in the service of deliberative rhetoric (p. 89; in this analysis deSilva parts ways with Ben Witherington and Elizabeth Schüssler Fiorenza).

Chapter four explicates John’s view of the cosmos, which defines the nature of reality that he wishes his audience to understand. The literary genre of the apocalypse is particularly suited to his purposes. “John’s principal rhetorical strategy involved getting a glimpse of, and communicating effectively, the bigger picture that reaffirmed the Judeo-Christian worldview, and the values and practices that worldview sustained, interpreting the dominant culture and its legitimation structures from within that worldview” (pp. 336–37). Here, as in other chapters, deSilva makes good use of theories from the social sciences (e.g., Clifford Geertz and Peter Berger) to illuminate the meaning of the text. In sum, the imminent coming of Christ in judgment presents a crisis that confronts John’s audience and is one to which they must properly attend.

Chapters five and six discuss how John constructs his own authority (ethos) vis-à-vis the rival voices vying for the attention of those he addresses. It is clear that for those who accept John’s claims to relay what he has received from God (cf. the way that Rev 1:1–3 is constructed) this text speaks with an authority that is immense. His pervasive use of the Hebrew Scriptures also buttresses his claims to authority. In chapters seven and eight, deSilva provides a fascinating analysis of the way appeals to emotion (pathos) are used in Revelation, treating particularly the emotions of “fear and confidence, friendship and enmity, and shame and emulation” (p. 192).

Chapters nine and ten examine John’s use of enthymematic-argumentative reasoning (appeals to logos or reason) to persuade his audience. While these arguments show elements of structure and lead to convincing conclusions, they build on shared assumptions between John and his Christian audience which “will only work within Christian culture and would be likely to be dismissed, even ridiculed, outside of early Christian congregations” (p. 255). Revelation 14:6–13 is analyzed in depth as an example of how these types of arguments work within the book. Chapter eleven treats Revelation’s “narrative logic” and John’s use of intertexture (“the pervasive interweaving of texts from the sacred tradition shared by John and his audiences” [p. 297]). A final chapter deals with the treatment of women in the book of Revelation and how the message(s) of the book can be brought forward into the twenty-first century and applied to the situations in which the contemporary church finds itself. The book concludes with a bibliography and indices of ancient texts, modern authors, and subjects.

Overall, this book is well-organized, and most chapters end with helpful content summaries. Several chapters include material that was previously published in journal articles, but some of these articles listed on pages xi–xii are not included in the bibliography under deSilva’s writings. A few typographical errors exist (e.g., the text on p. 59n102 is repeated in the text on p. 68, and Geertz’s publication date is incorrectly listed as 1975 [p. 96n11]).

Obviously, in interpreting a book like Revelation, many will want to disagree with various particulars of deSilva’s interpretations. However, his use of exegetical questions conducive to a fully rhetorical reading (see the master list of questions on pp. 25–27, but also various places throughout the book like p. 96) stimulate further research and provide the potential for fresh insights on current debates (cf. his suggestions in regard to the two witnesses in Rev 11 [pp. 223–25]) and the identity of the 144,000 in Rev 7 [pp. 225–27]). This is a book that will repay careful study by all who seek to hear what John heard and see what he saw.