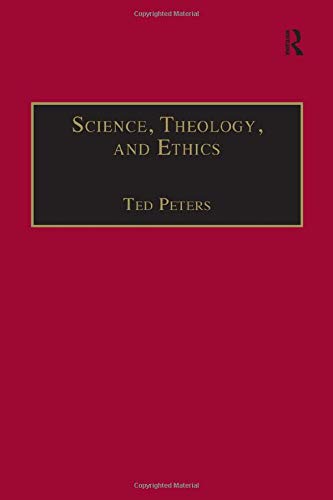 The title Science, Theology and Ethics adequately describes this book; it deals with these three aspects. It is a compilation of articles published elsewhere by Lutheran theologian Ted Peters. Peters, at present, is an editor of the Theology and Science journal, directs the ‘Science and religion course program’ at the Centre for Theology and Natural Sciences (CTNS) as well as being Professor of Systematic Theology at Pacific Lutheran Theological Seminary and the Graduate Theological Union in Berkeley.

The book is split into five parts. Part 1, consisting of two chapters, deals with science and theology. The first chapter presents eight ways of relating of science and theology, before going on to summarise the positions of some of key players in this debate. The next chapter examines the relationship between scientific research and the Christian faith.

Part 2 is devoted to science. Here we have chapters on time, God, David Bohm and on exotheology—the theological implications of extraterrestrial life.

The main bulk of the book is part 3 on genetics and its ethical implications, cloning, stem cells, designer children and co-evolution are dealt with here. Peters provides excellent summaries of the issues and even when his position is controversial—he is cautiously pro-cloning: ‘in principle, no distinctively theological affirmations would make cloning humans unethical. Though … it might be unwise’ (147)—he presents intriguing arguments in support of his position. He is in favour of a temporary, but not an absolute ban on cloning. He also argues that the ‘door must be kept open’ on the use of germ line intervention. In general, he endorses Robert Cole-Turner’s approach that genetic engineering ‘opens up new possibilities for the future of God’s creative work’. Particularly helpful in this section was Peters’ rebuttal of the gene myth: the idea that ‘it’s all in the genes’.

Part 4 deals with nuclear waste and the NIMBY (not in my backyard) mentality. The final part looks at the human body with a discussion on salvation and healing, and immortality. The final chapter covers much ground; Peters examines three soulectomies: an immortal soul, absorption into infinity and astral body, as well as the ideas of the physicist Frank Tipler and his Omega Point Theory, where resurrection means becoming an eternal information processor. Peter’s central thesis is that ‘human destiny is inseparable from cosmic destiny’ (315).

The articles date from 1988 to 1999 and little effort has been made to update them—which is a shame, as particularly in the field of genetics there has been much recent development. Inevitably, there is some overlap between articles and some are better than others. Nevertheless, they give an excellent overview of the polymath abilities of Peters and provide a good point to start with his work. It will be of particular interest to those who have an interest in the ethical implications of genetics and those interested in attempts to reconcile science with big bang cosmology and evolution.