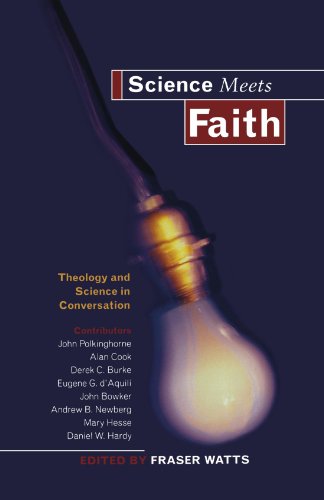 Fraser Watt’s compilation of lectures and essays about the relationship between science and faith succeeds in achieving the stated goal of providing a good guide to the current dialogue between science and religion. It is a heartening testimony to the richness of the discussions now taking place on the science/faith interface. For the most part, the contributions contain work which presents high-quality thinking from the disciplines of philosophy, science and theology, in an engaging, accessible manner. It would be an ideal book to give to any student showing signs of succumbing to a Dawkins-ian reductionist approach to religious faith.

The book moves from contributions focused on particular aspects of science to a number of essays concerned with broader reflections on the science/faith debate. As is perhaps to be expected, both sections contain stronger and weaker contributions. John Polkinghorne and Fraser Watts turn in polished, punchy, thoughtful essays concerned with, respectively, the religious implications of cosmology and of research into the human mind. There is a excellent digest of recent work in biology by Derek Burke which succeeds, within a few pages, in pointing Christians beyond a scientifically discredited creationism. Less clear is an essay entitled ‘Uncertainties of Science’, which aims to draw morals from quantum mechanics, relativity and chaos theory. Whilst there is something important to be said here, the author’s attempt to motivate a Kantian philosophy of science (with theories relating to the world of our observations, not of an independent reality) looks rather hasty. Clarity is also sacrificed in an article which aims, intriguingly, to delineate the neuropsychology of religion. It is hard to know how assertions about a ‘causal operator’ in the brain which ‘organises strips of reality’ are to be understood. At this level, it seems rather more helpful to leave things at a programmatic stage: as Watts nicely puts it, we are both natural and spiritual beings, so that there ought in principle to be both natural and spiritual accounts of what is going on in religious experience.

Amongst the best contributions to the book are the broader reflections by John Bowker and Mary Hesse. I for one would buy the book for these alone! John Bowker begins with a salient reminder to participants in the science/religion discusssion: both science and religion are multifaceted enterprises. Trying to find the relationship between them is thus as naive as trying to find the relationship between, say, history and ethics. Bowker thus proceeds by tracing out some of the historical issues which have come under the ‘science and religion’ umbrella, before making the interesting suggestion that the debate over how the propositions of science relate to those of religion has obscured a more pressing question, namely that of authority: to what extent should science, rather than religion, be given authority to answer questions about what should happen in human life?

Bowker’s article points to an underdeveloped aspect of the science /faith discussion. The ethical theme is picked up in Hesse’s dense and stimulating chapter which asks whether science itself can be seen as a religion. Hesse draws attention to the diverse roles which scientific theories play in modern culture. Beyond empirical work, well-grounded in observation, much of modern science contains speculative theories which take on, in her view, the status of modern myths. A notable example is modern cosmology, a domain in which theorizing runs well beyond the domain of the experimentally testable. The inescapable place of the mythic in our attempts to make sense of the world points us back to the role of religion. Hesse finds interesting linguistic parallels between science and religion: as both attempt to characterise a reality beyond that which surrounds us in ordinary life, both find themselves forced to rely on symbolism and metaphor.

In all, then, the Fraser Watts compilation provides a worthwhile, enjoyable digest of recent work in the science/faith dialogue.