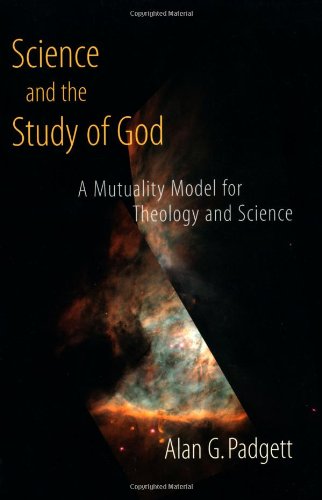 SCIENCE AND THE STUDY OF GOD: A MUTUALITY MODEL FOR THEOLOGY AND SCIENCE

Philosopher and theologian Alan Padgett is a Methodist working at a Lutheran Seminary. Such an eclectic and ecumenical background stands him in good stead to tackle the interdisciplinary subject of the relationship of science and theology.

Science and the Study of God provides a significant contribution to the burgeoning science-theology debate. His aim is to provide a collegiality, or mutual respect, model for the interaction of science and theology. What is refreshing about Padgett’s approach is that he takes seriously the idea that theology can inform the physical sciences. This is in stark contrast to many in the field who maintain that there is a dialogue between science and theology and yet they only seem to allow for a one-way conversation.

The first of nine chapters introduces the mutuality model; the second examines the philosophical background essential for it. Padgett takes issue with the critical realism espoused by most in this field and describes his view of realism as dialectical. He sees dialectical realism as a corrective to the individualistic and synchronic view of epistemology that a critical realist view often entails. He also makes a good case for realism in religion. This realist view takes seriously the ‘need for theology and science to mutually inform and modify each other’ (45).

The third chapter examines the quest for the historical Jesus; this serves to illustrate the myth of the independence of religion and science: there is no neutral, value-free scientific approach to the historical Jesus. He examines two versions of the neutrality myth: the ‘neutrality two-step’ and the ‘prejudice of perspective’.

Chapter 4, ‘Science and worldviews’, examines the so-called hard sciences; if the social sciences are not value-free what about natural science? He argues, along with most contemporary philosophers of science that paradigms influence our science. To do this he briefly traces the history of science from positivism to postmodernism and shows that ‘value commitments play a role in the criticism and growth of knowledge’ (68).

In chapter 5 he uses process theology with its desire to subordinate theology to a Whiteheadean philosophy, as a foil to show that ‘theology must not lose itself to philosophy’ (104). For Padgett, ‘Christian theology is based on Christian revelation and Christian faith, it cannot be philosophy and shout never pretend to be’ (91). I felt that in this chapter Padgett came very close to the neutrality two-step he criticised earlier and I would have liked to have seen some discussion of how worldviews affect philosophy and theology.

The next chapter examines the place of theology in the academy. He sees the goal of theology is to worship God. He then goes on to address the questions that this raises; including, how then can theology be an academic discipline and how then can it legitimate its truth-claims?

The issue of time and thermodynamics is then used as an example of how science and theology can be integrated (ch. 7). He concludes that they are mutually supportive. In chapter eight he uses an example from the social sciences—the incarnation—as an example in ‘theological method, with particular reference to formal logic’.

The final chapter summarises and there is a lengthy appendix that deals with the role of induction in a post-foundationalist world. There is a fifteen page bibliography and a nine page index.

In short: if you read one book on science and theology this year, make it this one!