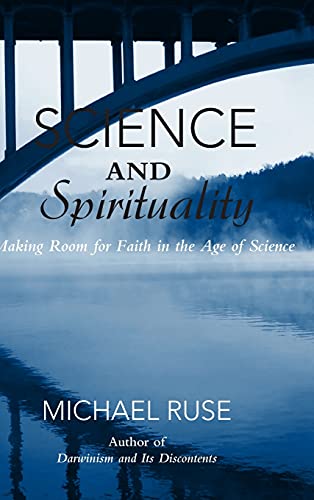 Science and Spirituality: Making Room for Faith in the Age of Science

Michael Ruse is to be commended for this refreshing, non-polemical contribution to the debate over religion and science. The sub-title of the book aptly reveals its central thesis: the natural sciences do not preclude religious, specifically Christian faith. While scientific inquiry stands out as our best form of acquiring knowledge about the world, it cannot answer some of the deepest questions we can raise about human life, nature, and whether or not God exists.

The introduction makes clear Ruse is neither in the vitriolic anti-theistic camp of Dawkins et al., nor is he a Christian apologist. But he also makes clear that the form of Christianity he defends in terms of intellectual integrity is not devoid of the traditional theistic claims about there being a Creator, an incarnation, and a resurrection. Ruse is not interested in a Christianity that carries no more commitments than Unitarianism.

Chapter 1, “The World as an Organism,” argues that worldviews, including scientifically grounded worldviews, involve one or more root metaphors. Such root metaphors may be indispensable though they also have limitations (e.g., if you think of the world as a plant, metaphorically, you are not thereby claiming that the world is, literally, a plant). Ruse characterizes the root metaphor of Darwinian evolution:

It is the metaphor of the world of organisms as designed. It may be that they were literally designed by God, but that is not the point in Darwinian biology. They are as if designed—truly not designed, but appearing so because of natural selection. Everything else is on top of—or, if you prefer, embedded within—this metaphor. (p. 24)

The first chapter fills out a teleological concept of nature, as found in Greek philosophy and construes Darwinians as conceiving of nature as if it is teleological.

Chapter 3, “Organisms and Machines,” examines the emergence of different mechanistic accounts of the world and the resistance to such accounts (and its root metaphor of the machine) by vitalism.

Chapter 4, “Thinking Machines,” is the most ambitious in its historical narrative, moving from the seventeenth century to contemporary cognitive science. All along the way, Ruse highlights the use of root metaphors of the world and how these can work to eclipse phenomena (the machine model is not friendly to belief in free will) and promote different forms of inquiry.

The machine metaphor rules modern science. I do not claim that everyone is happy with this. Indeed, in the next chapter I will consider the thinking of those who want to think outside the metaphor. But the triumph of the metaphor is the taking-off point for the next part of the case I want to make. Indeed, it is this very triumph that does lead us forward. (p. 118)

And as Ruse moves forward, he begins to show the limits of scientific naturalism in answering the “big questions.” So Ruse contends that Dawkins inadequately addresses cosmological inquiry about the existence of our cosmos in terms of successive, contingent causes:

You need something to break the succession. Dawkins does not think this is possible. Aquinas was more optimistic, but he realized that—a possibility Dawkins does not consider—the way to break the succession is by pointing out that we are not looking for an end point to the chain, way back in the past, even if there is one. To speak of a First Cause is not to speak in a temporal fashion at all, even though it may just so happen that there was a point at which the chain did start. We have to be looking for a cause that makes the whole thing happen, then, now, and in the future (Hick 1961). If you like to think of time as horizontal, then we are looking for a vertical cause. Something that keeps the whole kit and caboodle in being and in action. And it is pretty clear—at least this is the traditional answer, and I see no reason to give it up—that this is going to require a being (let us call it that without prejudice) that is sufficient unto itself, needs no cause, because in some sense it is necessary. In a sense, it is outside time. You do not ask when 2 + 2 = 4 became true or when it will cease to be true. That is just not a sensible question. And the same has to be true of this being. And hence, obviously, this being is not going to be one of the chaps, a contingent fellow along with the rest of us. It cannot be a physical being, in the sense that we understand physical. That keeps us trapped in the chain. It has to be transcendent, whatever that might be. (p. 121)

Given Ruse’s other works in which he identifies himself as a non-theist, one wonders whether Ruse may be like Saul: “Is Saul also among the prophets?” (1 Sam 10:11 KJV). Also, Ruse adds, “I am not saying that any of this is true,” though he is claiming that the truth or falsehood of such cosmological reasoning goes beyond science (p. 121). And Ruse goes on to defend the intelligibility of asking why there is and continues to be a contingent cosmos. After considering a host of challenges from Paul Edwards to Adolf Grünbaum, Ruse writes, “I conclude, therefore, that the primordial question is not answered by science and is not obviously a meaningless question or directed toward a pseudo-problem” (p. 129).

As for ethics and morality, Ruse argues that science alone cannot ground ethics:

Science cannot justify claims about the basis for our moral beliefs and actions. (This is the part of moral theory known as metaethics.) Why should I be good? Why should I be fair? Why should I care about my kids rather than the kids of a stranger? Why should I care about the bloke I am about to shove on the rails? Philosophers and theologians and preachers have had lots to say on these issues.… What is relevant is that morality cannot be derived from the physical facts of the matter. More pertinently, it cannot be derived from machine-based science. (p. 133)

Ruse goes on to display the limits of answering questions about the meaning or purpose of human life and the nature of free agency within the root metaphor of the world as a machine.

Chapter 6 considers non-theistic accounts of the cosmos that seem to be at odds with natural science. Again, without endorsing such accounts (and their predominantly organic root metaphors), Ruse highlights weaknesses in what may be called scientism.

Chapter 7, “God,” goes to the heart of “making room for faith.” The coherence of theism is defended; there is a balanced, clearheaded philosophy of divine attributes, the problem of evil, miracles, and the compatibility of free will and omniscience.

Chapter 8, “Morality, Souls, Eternity, Mystery,” takes up the traditional claims of Christianity (not the diluted form of “Christianity” that denies an afterlife, miracles, and so on such as associated with the non-philosopher Bishop Spong in popular culture) and Ruse defends their compatibility with science. Ruse writes,

My argument in these last two chapters has been that, although the central claims of Christianity are still constrained by reason, and although there is still certainly the need (as with natural law theory) to make sure that one’s religion-based claims harmonize with modern science, these central core claims by their very nature go beyond the reach of science. I do not say that you must be a Christian, but I do say that in the light of modern science you can be a Christian. We have seen no sound arguments to the contrary. (p. 233)

What emerges in Science and Spirituality is an important endorsement of the vitality, integrity, and even the sacred nature of science (from a Christian point of view).

Apart from the fact that there will almost certainly always be the major areas into which science cannot move, remember that for Christians reason is one of God’s greatest gifts, the sign that we are indeed made in His image. Science therefore is a sacred task. It is also a difficult and challenging task, befitting creatures of our nature. Only slowly and with much effort will we discover the true nature of our home. As we do, our understanding of God and His nature and His works will obviously likewise change and mature. (p. 236)

Ruse concludes with the characteristic good humor, humility, and charity that characterize much of his work, as in his 2001 book, Can a Darwinian Be a Christian?

One doubts very much that today’s frenetic partisans, from science and from religion, are going to change their minds very much. But the challenge of seeing the proper relationship between science and religion is there, and, both politically and intellectually, it is an important challenge. The hope is that the ideas and conclusions of this book will inspire others to join with the author in working on the task before us. (p. 236)

This book is highly recommended to all those interested in the science-religion debate, both for its content and tone. It is clear, accessible, fair, engaging, and (compared to some books on science and religion) refreshingly non-bombastic, tolerant, and un-patronizing. Specialists and general readers will benefit from both Ruse’s historical narrative and his finely crafted critical and constructive arguments.

Lest this review seem overly enthusiastic, I reluctantly add a customary reservation, though the matter is quite minor. I suggest that Ruse’s historical narrative would have been more complete and stronger if he included the seventeenth-century Cambridge Platonists who had an important role in the relationship of science and religion at the end of the Renaissance and the birth of modern science. This is, however, of minor significance, as Ralph Cudworth, Henry More, and other members of this important movement would have wholeheartedly endorsed Ruse’s central lines of argument.