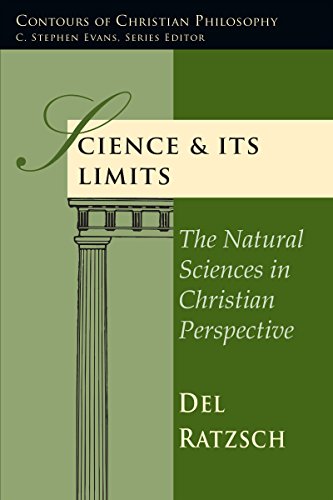 Science and its Limits: The Natural Sciences in Christian Perspective. Second Edition

For a thinking Christian looking for an introduction to the central questions of Philosophy, the IVP ‘Contours of Christian Philosophy’ series took a lot of beating. They summarised, in a comprehensive, accessible, theologically sensitive manner, the core debates going on in metaphysics, epistemology, philosophy of science, ethics and philosophy of religion. The series is now over ten years old, but it is a most encouraging sign to see that Del Ratzsch, Professor of Philosophy at Calvin College, has re-worked his most lucid introduction to the Philosophy of Science, adding material concerning the content and style of the heated debate about evolutionary theory.

The book provides sensible, clear discussions of the central topics in the discipline. The discussion of Popper, Kuhn, positivism, as well as the ‘big themes’ of rationality and objectivity is consistently excellent. The reader is led carefully from traditional conceptions of the philosophy of science, through the crucial changes of the 60s and 70s, up to a picture of the contemporary situation. For an introduction to this material that is exegetically sensitive, as well as moderate in outlook, this sketch is hard to beat.

It also features a sensitive discussion of the vexed issues surrounding the question of design in nature. Del Ratzsch takes an irenic stance, describing in a sympathetic manner the concerns that have motivated the so-called ‘Intelligent Design’ movement to argue, against methodological naturalism, that the concept of design is a legitimate one in science. This is surely a debate urgently in need of the moderating voice of the philosophers of science, and Ratzsch’s comments, encompassing both the central arguments for methodological naturalism and possible lines of reply, are welcome.

Ratzsch addresses the current creationist fashion for appealing to particular instances of ‘design’ such as the E. coli motor. Such intricate mechanisms, the argument runs, are hard to account for evolutionarily. The difficulty with this line of reasoning is that it is open to an obvious tu quoque. The evolutionist can turn round and ask the intelligent design theist to account for an abundant number of observed phenomena (namely, particular evils in the world) which are hardly well explained by the postulation of a benevolent creator.

The position on evolution which has been common amongst British evangelicals in recent years, namely of allowing the complementarity of Biblical and evolutionary accounts of origins, deserves more credence than Ratzsch gives it. The conceptual distinction between reason and cause creates the space, it would seem, for an intelligible account of theistic evolution. The opening chapters of Genesis inform us about the divine purposes in creation. The picture of evolutionary biology—sketchy, tentative, yet undoubtedly closer to empirical confirmation than anything creationists have proposed—tells us about the material causes which led to the observed diversity of species of life.

Ratzsch points to difficulties in the idea of complementarity. Yet it is arguably the case that one of the goals of a Christian philosophy of science is the drawing of the distinction between evolutionary theory itself and the reductionist interpretations of that theory popularised by Dawkins and his followers. One way of doing this is by demonstrating the plausibility of a theistic interpretation of evolution. It is a matter of slight regret that Del Ratzsch does not go further down this particular road.

Overall, though, this book sets a high watermark for what we can but hope is a re-print of the entire Contours series.