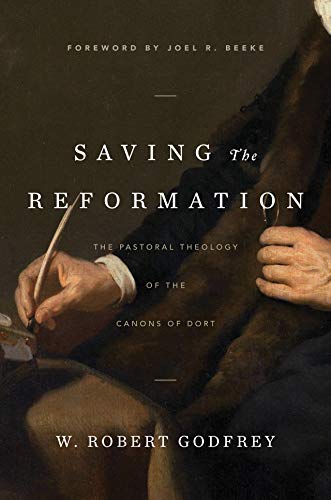 Saving the Reformation: The Pastoral Theology of the Canons of Dort

Despite its importance to Reformed theology and identity, the Synod of Dort (1618–1619) is insufficiently understood today. This Dutch synod involved various international Reformed delegates and represents a uniquely international Reformed statement of the doctrines of grace. In Saving the Reformation Robert Godfrey has produced a translation and exposition of the Canons of Dort which fulfils an educational and pastoral need and appeals to pastors and laypeople alike.

After beginning with a brief historical introduction, the bulk of Godfrey’s book is a fresh English translation of the Canons of Dort out of the original Latin, including their introduction and the statements of rejected Remonstrant (Arminian) errors. This material is followed by several chapters of exposition which read like a popular-level biblical exegetical commentary. The book’s pastoral concerns shine through here as Godfrey highlights the practical implications and significance of the Reformed doctrines of grace. In this he echoes the intent of the canons themselves: they were written in terms that would be clear for interested laypeople, and not merely scholastic theologians (pp. 81–82). Ordinary believers need to understand the significance of sovereign predestination, the corruption of original sin, the redeeming efficacy of Christ, the regenerative work of the Spirit, and the perseverance of God’s people. This is the basis for the book’s title, Saving the Reformation. According to Godfrey, the goal of the canons was one of “clarifying and buttressing” the theology of the five solas of the Reformation against the claims of Arminius and his followers (p. 179). Beyond discussing the meaning of the canons, Godfrey offers brief comments on their structure that aid comprehension without dominating the discussion. The repetition within the canons themselves means that Godfrey’s exposition is likewise a little repetitive, however overall his comments are judicious and valuable.

The book includes six appendices. Appendix 1 is the longest (42 pages) and offers an essay of the character of Arminius’s opposition to Reformed theology. Here, Godfrey convincingly demonstrates that Arminius was a theological controversialist rather than of a mainstream Reformed tradition, and that he was probably somewhat disingenuous about his views at various points in his career. This is the most scholarly section of the book (the main text contains a total of 22 footnotes, whereas this appendix alone contains 121!). Whilst this is a useful discussion, it feels somewhat out of place in this book and doesn’t markedly enrich the book’s main purpose. The other appendices offer material that aids the reading of the canons, such as notes on their structural pattern, a detailed structural outline, and an index listing the relationship between the canons and refuted Arminian errors.

This book will frustrate some academic readers, though this is partly due to the book’s purpose and intended audience. Whilst Dort sought to make its theology accessible to the laypeople of its day, formulations of Reformed theology have changed, and indeed narrowed, since the seventeenth century. Unfortunately, Godfrey applies this 400-year-old consensus document to modern Reformed Christians without sufficiently highlighting this hermeneutical distance. Indeed, Godfrey’s equation of Dort’s five heads of doctrine with the “five points of Calvinism” (p. 13) invites modern readers to conclude that Dort invented the TULIP taxonomy, whereas modern research has demonstrated that the TULIP framework did not exist in the early modern period. It would have been helpful to explicitly delineate the differences between Dort and TULIP somewhere in the text.

This point becomes relevant when considering the extent of the atonement. Godfrey is aware that the canons expressed a theological consensus compatible with a range of views. Thus, he rightly recognizes that the canons deliberately allow for both infralapsarian and supralapsarian theological schemes (pp. 90–91). However, he does not mention the canons’ compatibility with hypothetical universalism, presumably because he does not believe that this doctrine is true or helpful for modern audiences to consider. This might not matter in a book of this length and purpose except that Godfrey’s discussion elsewhere frames the canons in terms of a contrast between (Reformed) definite atonement and (Arminian) universal atonement (pp. 118–21). This can give the impression that, according to Dort, hypothetical universalism belongs on the Arminian side of the issue, whereas the canons are framed such that the opposite is true. At the very least this issue ought to have been made explicit for the sake of clarity.

Finally, the book would have benefitted from featuring more of the views of the delegates to Dort where relevant to the exposition. For example, the British Reformed delegation raised concerns about including the doctrine of Perseverance of the Saints in the canons, not just the Arminians. Godfrey’s exposition would have been enriched by highlighting how differences like these were addressed and what their pastoral significance would be.

These criticisms notwithstanding, this is a useful book. For the layperson or pastor looking for an introduction to Dort and its theology, this book would be a great resource, not least because it centers on a clear translation of the canons themselves.