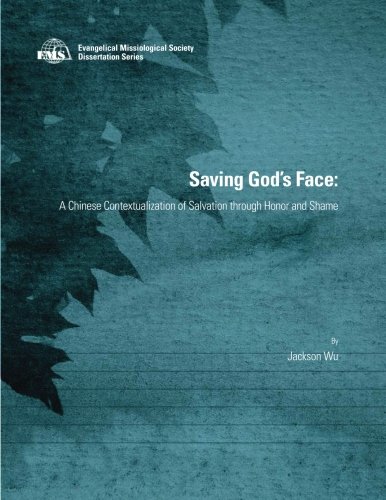 Saving God’s Face: A Chinese Contextualization of Salvation through Honor and Shame

In Saving God’s Face Jackson Wu contributes to cutting edge discussions of global theology. Building on foundational books such as Timothy Tennent’s Theology in the Context of World Christianity, Wu discusses one specific question of Christian theology in the context of China. Wu’s study intersects a number of academic fields, including theology, missiology, and Chinese studies. Theologically, Wu asks, “[W]hy have Christians favored law-language when so much of the Bible emphasizes God’s glory and his people not being put to shame?” In the area of missiology, Wu asks, “[H]ow do we share the gospel in honor—shame cultures in a way that both reflects what the Bible really says and does not come across as superficial?” (p. xi).

Wu brings keen insights to this topic. He has a PhD in Applied Theology from Southeastern Baptist Theological Seminary and has served as a church planter and now teaches theology and missiology for Chinese pastors. From this background, one of Wu’s central arguments is, “Many who are more accustomed to a law-based presentation of salvation could benefit from hearing a message about the restoration of God’s glory and the removal of human shame” (p. 9).

In chapter 4 Wu notes, “Remarkably, there is tremendous overlap between the Bible and Chinese culture. On this common ground, one can pursue a contextualized soteriology that fits Eastern cultures without denying the legal motif familiar to Western theology” (p. 177). He then goes through, for instance, a number of various contextualizations of honor and shame. The goal of chapter 5 is to find how Chinese culture adds to an understanding of salvation. Wu summarizes one part of his conclusion: “The interpretation suggested in this book . . . affirms that sin is most basically a violation against God’s honor. Averting God’s anger is not most fundamental . . . . Sin also raises the need of God’s own vindication. God’s vindication involves the manifestation of his supreme worth in all the earth” (p. 207, emphasis in the original).

A central strength of the book is the plethora of sources from a wide variety of disciplines. Wu moves effortlessly from source to source, placing scholars into dialogue on numerous pertinent issues. For PhD students, the book provides a model of an effective literature review. He uses Greek and Hebrew, and he includes an extensive exegetical section on interpreting Rom 1–5 from an honor-shame perspective (pp. 250–92).

Unfortunately, Wu uses very few Chinese-language sources. He does discuss several Chinese authors whose works are available in English, but the study includes few published Chinese-language works. Thus, although a “Chinese contextualization,” the book may be aimed at a Western and English speaking audience. Additionally, while Wu wants to bring the best of Chinese and Western theology together, he may miss the significant voices of the emerging urban churches in China and the development of fluid “hybrid-identities.” (See, for instance, Ethan Christofferson, Negotiating Identity: Exploring Tensions between Being Hakka and Being Christian in Northwestern Taiwan [Eugene, OR: Pickwick, 2012]; and Jon Ro, “Globalization’s Impact on the Urban Church in China: A Multiple Case-Study of Four Churches in a Major Urban Center” [PhD diss., Trinity Evangelical Divinity School, 2013].)

A problem that plagues numerous dissertations, such as this book that Jackson Wu’s is based on, is overstatement. Wu occasionally claims too much, optimistically asserting, for instance, that ideas from honor-shame might help reconcile the “New Perspectives on Paul” with what has been “dubbed the old Perspective” (p. 225). In another example, in chapter 3 on Chinese culture, at the end of an adequate but necessarily cursory twenty-five pages on Chinese culture, Wu adds the claim to have “outlined the major contours of Chinese culture” (p. 94).

Saving God’s Face reads like a dissertation; it is scholarly and competent, but not artistic. Less repetition, a more modest tone, and maybe more subtle arguments could help the book reach a broader audience. I hope Jackson Wu continues to publish because his ideas are significant. Two of his practical applications help demonstrate the value of the study.

First, after discussion of honor and shame in Romans, Wu writes,

Practical implications extend to every part of human society. Competitiveness and exclusion become normal means of face grabbing. In such disorder, God is disregarded and so dishonored. God alone is the measure of [honor-shame]. By dividing the world into “us” or “them” one loses perspective of the one true God. (p. 279)

Second, Wu writes of the implications of honor-shame for the Chinese churches:

First, Chinese Christians must reckon with their own sense of identity and loyalty. Doing so will require people to reject typical ways of dividing the world, whereby ethnicity, gender, and social status categorize those who are “insiders” and “outsiders.” This leads to a second implication. Paul challenges not only Jews and Greeks, but also the Chinese church as it considers its own calling to send missionaries cross-culturally among fellow Gentiles. Third, the Bible spurs Chinese Christians to see the church as family, not laying excessive stress on bloodline. (p. 298)

Although Saving God’s Face takes some persistence to read, the patient reader will be rewarded.