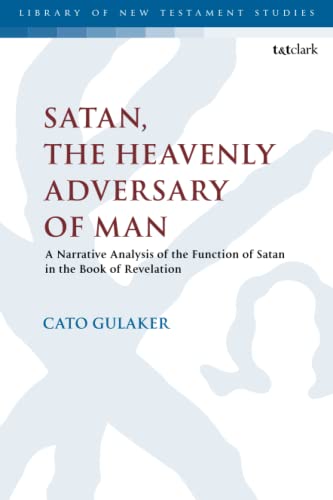 Satan, the Heavenly Adversary of Man: A Narrative Analysis of the Function of Satan in the Book of Revelation

In this monograph, Gulaker examines the role of Satan in the book of Revelation. Gulaker is most interested in the following questions: What is Satan’s role in relation to God? Is Satan best described as God’s dualistic apocalyptic enemy, a hopeless foil, or God’s heavenly servant? In other words, are Satan’s actions fully in concert with God’s will or opposed to it? Gulaker unsurprisingly concludes that Satan is the heavenly adversary of humanity in the book of Revelation. However, Gulaker also insists that this adversarial work is not opposed to God; rather, Satan is faithfully—for the most part—working in concert with God’s will. This latter conclusion is unlikely, and the below will analyze some of his potential missteps.

In chapter 1, Gulaker reviews the scholarly positions of Satan and his role in the book of Revelation. He also discusses the roles of Satan found in the Old Testament, Dead Sea Scrolls, and Jubilees. Gulaker finds that most scholars view Satan as an apocalyptic and cosmic enemy of God instead of as God’s servant. Therefore, Gulaker argues for why Satan should be viewed as God’s servant instead of God’s enemy. Gulaker’s primary evidence for this view is Satan’s role in the book of Job, where Satan is allowed to be an adversary against a righteous individual (pp. 4–5). However, it is unlikely that Satan is a “faithful” servant in opposing Job.

Gulaker then describes his method of narrative criticism in chapter 2, and he seeks to do it in a way that foregrounds Satan’s activity. This decision may seem sensible, given the topic of his book, but the problem is that Satan is not a primary character. Gulaker recognizes that Satan is a secondary character in theory (p. 44), but Gulaker’s analysis emphasizes Satan’s activity in practice. In other words, practically speaking, Satan becomes a primary character in Gulaker’s narrative of the book of Revelation. This narrative shift leads to Gulaker emphasizing the sifting of humanity as “the overarching narrative plot of the book” (p. 46) instead of the ultimate victory of Jesus. Alternatively, Gulaker views humanity as the primary protagonist in the book of Revelation (p. 230).

Gulaker then focuses on the texts of Revelation 2–3 (ch. 3), Revelation 12–13 (ch. 4), and Revelation 20 (ch. 5), followed by a brief conclusion (ch. 6). Gulaker provides some useful insights on various details while engaging these key texts. For example, he notices that the four beasts of Daniel 7 have a total of seven heads and the fourth beast has ten horns (compare Rev 12:3; 13:1). Moreover, Gulaker supplies helpful summaries of scholarly positions in the footnotes along with concise criticisms; for example, see his assessment of divine passives (p. 112 n. 53). Gulaker also reads Revelation 2–3 as a horizontal perspective of the narrative and Revelation 12–13 as a vertical perspective, which is a welcome invitation for further inquiry.

Nevertheless, Gulaker also makes a couple of key exegetical missteps. Most prominently, he refuses to acknowledge that Satan’s moniker “the ancient snake” (Rev 12:9; 20:2) is an allusion to the snake of Genesis 3 (pp. 129–34). Instead, he perplexingly concludes that it is “best interpreted as an implied known allusion to the beasts of Daniel 7 and the dragons/sea serpents of the Hebrew Bible” (pp. 133–34). Gulaker rightly fears that an allusion to Genesis 3 would weaken his argument that Satan is not acting as a cosmological (and primeval) enemy of God in the book of Revelation. However, the weight of evidence against Gulaker’s conclusion is overwhelming for several reasons: (1) Gulaker must dismiss the Johannine view (John 8:44; 1 John 3:8) of a more “autonomous” Satan (p. 133) as a later “development” (pp. 14–15) without recognizing that the book of Revelation is considered Johannine by many; (2) Gulaker misses 2 Corinthians 11:3 (compare 11:14)—and too quickly disregards Romans 16:20 in a footnote—when he comments that Paul never refers to Satan as the serpent of Genesis 3 (p. 130); and (3) Revelation 12:9 clearly alludes to Genesis 3:15 because “the ancient snake” expresses enmity towards the woman, her male child, and the rest of “her seed” (Rev 12:4–5, 17). Moreover, on a more technical note, Gulaker does not recognize that “those who dwell upon the earth” refers only to nonbelievers in Revelation 3:10 (pp. 83, 86, 230–31). In some places he acknowledges that “those who dwell upon the earth” are separate from the saints in the book of Revelation (pp. 173, 197, 218), but he then assumes that the saints are included among “those who dwell upon the earth” in 3:10. This passage then mistakenly becomes important for his arguments that the sifting of humanity is an “overarching narrative plot of the book” (p. 46) and that Satan is God’s faithful servant for this purpose.

Gulaker’s book could prove profitable for those who are studying either the role of Satan in the Bible or the passages of Revelation 2–3, Revelation 12, or Revelation 20. Nevertheless, his above perspectives limit the overall usefulness of this study.