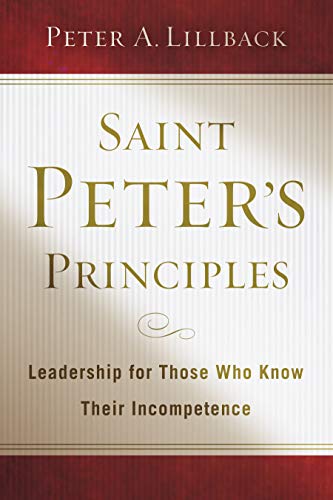 Saint Peter’s Principles: Leadership for Those Who Already Know Their Incompetence

Written by Peter A. Lillback Reviewed By Jeremy M. Kimble
Ethics and Pastoralia

The literature on leadership is ever-increasing, dealing with issues such as management, vison-casting, execution of strategy, and the like. However, one would be hard pressed to find many leadership books that deal with topics like incompetence and dependence, and focus on a particular corpus of Scripture as the main reference point for each principle. But this is precisely what one finds in Lillback’s Saint Peter’s Principles, as the author focuses on the apostle Peter in terms of his life and writings and brings out a treasure trove of biblical principles for those leading in some capacity.

Lillback is president and professor of historical theology at Westminster Theological Seminary. He has served in pastoral ministry for over thirty years and has written numerous articles and books. Saint Peter’s Principles contains seventeen sections, working through topics such as the formation of the leader, self-leadership, godly leadership, management, communication, planning, decision-making, and legacy. In cataloguing over one hundred different leadership principles, the uniqueness of this work is the focus on Peter, an encouraged awareness of one’s weaknesses and shortcomings, and beneficial spiritual exercises that come at the end of each principle. All principles are summarized at the end of the book along with their corresponding biblical texts, and Lillback also provides an epilogue with sage wisdom on pastoral ministry.

Lillback combines a knowledge of both the biblical text, specifically in relation to Peter, as well as the leadership literature in general. As such, readers will be taken on a whirlwind tour of a range of differing principles, but each of them given in a few brief pages. The greatest strength of this volume is the obvious wisdom it contains, garnered over many decades of ministry. This wisdom is most readily demonstrated by the author’s understanding of human weakness and incompetence. Riffing on the well-known “Peter principle,” Lillback asserts that “a leader doesn’t just rise to his highest level of incompetence, but begins with incompetence and seeks to learn wisdom in the midst of that incompetence” (p. 14). Such an attitude kills self-sufficiency and pushes one toward dependence on God for all matters of leadership. This approach is honest and, quite honestly, a relief to those of us who lead. And it is based on the life and writings of the apostle Peter, a character who we know went through his own growing pains and eventually served as a faithful apostle of Christ and key leader of the church.

There are moments within the book when the biblical exegesis, and thus the principles derived from specific texts, feels slightly strained. Admittedly, the author is clear that his intention is not for the book to be an exegetical study, stating that “the goal here is not so much to interpret Peter’s writings as to apply them” (p. xviii). However, this only highlights the problem, as proper application stems from right interpretation of the text. For example, when dealing with “the autonomy of self-improvement,” Lillback points to the occasion (recorded in Luke 5:1–11) when Peter was ordered by Jesus to cast his nets out again to catch fish, eliciting Peter’s protest that they had caught nothing all night (v. 5). When they haul in a massive catch of fish Peter says, “Depart from me, for I am a sinful man, O Lord” (v. 8). Lillback interprets this to mean that in this moment Peter “expressed the folly of believing that he could take care of his incompetence on his own” (p. 51). He thus uses this episode to castigate self-help. While not an impossible application of the text, this is hardly its main point, as the focus seems to be on Peter’s lack of faith in Jesus followed by humble recognition and repentance. Lillback’s interpretation certainly gets at the issue of self-improvement, but this is one of a number of times when paying closer attention to issues of context and authorial intention would strengthen the applications he seeks to make from particular texts.

Notwithstanding this criticism, the book is a tremendous collection of wisdom that is sure to help any leader who humbly recognizes their incompetence and seeks to follow Jesus. The size will likely intimidate some potential readers, but they should not be put off; the time spent will be worthwhile. After reading Saint Peter’s Principles for this review, I would suggest that the best way to take in this book with all of its principles is to read one per day—allowing time for measured reflection and the spiritual exercises at the end of each section (an approach I am now taking on my second read). Of the myriad of books on the market dealing with different aspects of leadership, this work stands out as a means of developing one’s character and working out fundamental aspects of everyday life in leadership.