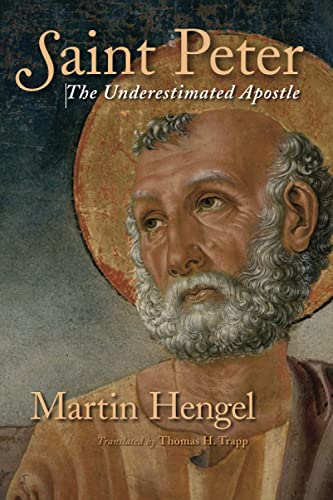 Martin Hengel's Saint Peter: The Underestimated Apostle is the English translation of the German Der unterschä tzte Petrus. Zwei Studien (Mohr Siebeck, 2006). As the German title suggests, the book is comprised of two studies. The first and most significant section is “Peter the Rock, Paul, and the Gospel Tradition” (pp. 1-102). Notable features of this section include the significance of Peter's identification as the “rock” in Matt16 in relation to his central and authoritative role in the growth of the church; Peter's dominant presence in the four Gospels, with reasons that Peter is presented the way that he is; and the assertion that the dispute between Peter and Paul (recorded in Gal2) was far deeper than many realise, lasting for many years and affecting their mission and teaching. Using textual, historical, and form-critical methods, Hengel's approach describes Peter's life and legacy not by treating the NT as historically reliable so much as by seeking to reconstruct what the “real Peter” may have looked like by looking behind the text. A three-page summary of this first section of the book quickly orients the reader to Hengel's overall perspective (pp. 100-102; see also Hengel's chronology of NT events and writings on pp. 135-37).

The second section of the book is “The Family of Peter and Other Apostolic Families” (pp. 103-34). It surveys the limited material available to us in biblical and extra-biblical sources, and makes some observations about the wives and families of the apostles, as well as the role of Christian women in the period spanning Jesus' ministry through to the third century a.d. As one would expect from Professor Martin Hengel (1926-2009), Saint Peter reflects an impressive familiarity with NT criticism and exegesis, theology, NT Apocryphal and Rabbinic studies, the apostolic fathers, as well as Greco-Roman sources.

For those who hold to the historical reliability of the NT documents, however, Hengel's heavy reliance upon the methods and assumptions of critical scholarship diminishes the value of his work. A few of comments can be made in this regard.

First, the lens of critical scholarship regularly leads Hengel to reject the historical claims of the text in order to offer less plausible alternatives supported by no extant documents. As already mentioned, a significant proportion of Hengel's work, by reading behind the NT, argues for a bitter, competitive, and long-lasting enmity between Peter and Paul (see esp. pp. 16-17). Hengel interprets the Gospels, the Book of Acts, 1-2 Corinthians, and parts of Philippians and Romans in a way that supports his argument. For example, Hengel asserts,

Both apostles deeply wounded the other in the conflict at Antioch (Gal. 2:11ff.) and thus became opponents. This situation was not only still an issue in Galatians 2 but continued to have an effect in the later letters of the apostle and in his mission . . . about which Luke felt it necessary to pass over in silence because he wanted to present a harmonious picture about early Christianity. (pp. 52-53)

When arguing from Corinthians to support his case for the rivalry, Hengel daringly asserts that Paul's troublesome opponents in Corinth were “sent by the Petrine mission” (p. 92). Paul's mention of the “super-apostles” “primarily refers to Peter, his friends in Antioch and Jerusalem, and his messengers” (p. 77). Such a radical and clearly problematic proposition requires far more defence than is given.

Second, it may have strengthened Hengel's Petrine study if he had given more attention to the letters of 1 and 2 Peter. Although he considers them to be pseudonymous, others who deny Petrine authorship suggest a likely degree of consistency of thought between the later author (often considered to be a disciple of Peter or from a Petrine school) and the deceased apostle. As a result, the rich insights of 1 and 2 Peter into Peter's character and theology have been overlooked and contradicted by Hengel's propositions. One significant example, challenging Hengel's assertion of rivalry between the apostles, is Peter's affectionate referral to “our beloved brother Paul,” whose letters are not only to be heeded but are also, strikingly, equated with the “other Scriptures” (2 Pet 3:15-16).

Finally, Saint Peter: The Underestimated Apostle presents Peter as one who was in some regards more “successful” than Paul. However, in the process of arguing his case, Hengel's Peter and Paul consistently live below Jesus's and their own ethical standards, displaying enduring immaturity, vengefulness, and self-interested behaviour as they vie for supremacy over each other. In my view, in order to make his case Hengel misdirects credit to Peter for what the NT reports as God's work through Peter, such as conversions, miracles, and Spirit-inspired speeches. Similarly, regarding the privileged time Peter was given with Jesus Christ, Hengel credits Peter for it when stating, “The traditions about Jesus played a considerable role in [the church's] mission, and Peter was in that respect superior to Paul, the more successful missionary to the Gentiles” (p. 102-3). Although Hengel uses many such arguments to assert Peter's accomplishments and impressiveness, neither apostle comes out of it as positively as the NT's own presentation of these humble, faithful fellow servants of their praiseworthy Lord. In the end, it could be well argued that Hengel's portrayal of Peter underestimates him.