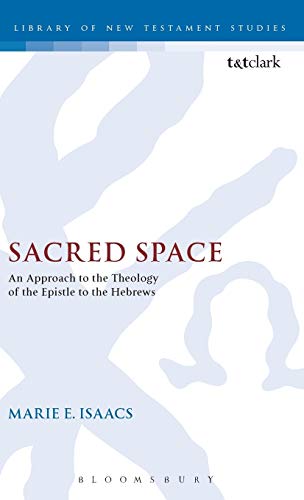 Sacred Space: An Approach to the Theology of the Epistle to the Hebrews (JSNT Supplement 73)

Cutting across the surface of this study of the letter to the Hebrews are two turbulent and potentially disruptive critical issues. The first concerns the historical circumstances under which the letter was written; the second has to do with the nature of its controlling structure—what, if anything, holds it together? The final measure of this well-written and instructive work of exegesis is likely to be whether Marie Isaacs, a lecturer in Biblical Studies at Heythrop College, London, succeeds in keeping these two streams within the channels that she has defined for them.

Her review in chapter 1 of the debate over authorship and readership from Nairne onwards is comprehensive and useful. With some reservations and due respect for the difficulties involved she suggests that the letter was written after the destruction of the temple in ad 70 to Jewish Christians with the purpose of reshaping a conception of the means of access to God that relied too heavily on the continued existence of the sanctuary. The force of this interpretation rests on the assumption that it is only really with the loss of the Temple that the church was led to understand Christ as the unique means of access and that it is in Hebrews that such an understanding is first developed.

With equal cautiousness Isaacs acknowledges that the author has some affinity with Philo and Hellenistic metaphysics, but argues that this is a matter more of terminology than of substance. While he makes use of certain atemporal relations—between, for example, the heavenly tabernacle and the earthly copy—this does not displace the traditional Judaeo-Christian concept of two ages. In this respect Hebrews has more in common with Jewish apocalypticism than with Platonic idealism.

Isaacs’ thesis is that Hebrews aims at a ‘relocation’ of ‘sacred space’ from earth to heaven. In chapter 2 she explains how the author develops this theme, first in terms of the promised land and God’s rest, secondly in terms of the Temple cult and the Aaronic priesthood. What the destruction of the Temple must finally demonstrate to Jewish believers is that the OT conception of salvation, which had been tied so closely to geographical space, can be fulfilled only if projected on to a heavenly landscape.

The emphasis shifts in chapter 3 from the failure of the old system to the success of Jesus in establishing the ‘definitive means of access’. Here one important weakness with Isaacs’ thesis becomes apparent, which is that she is unable to subsume to any worthwhile degree what is said about the person and work of Christ under the rubric of ‘sacred space’. The conclusion reached at the end of the chapter, that Jesus is portrayed primarily as Davidic son, is reasonable and the analyses on which it is based—Jesus as mediator, and in relation to Moses, Melchizedek and the angels—cover the ground well. But the attempt to connect this with the spatial motif is less convincing and one is left wondering why the idea has been given such prominence.

The final chapter consists of three studies relating to the theme of Christ’s heavenly session. In the first Isaacs argues that, partly in pursuit of the spatial perspective, the writer to the Hebrews has gone beyond the traditional Christian interpretation of Psalm 110 by linking the exaltation and priestly motifs to produce an ‘innovative soteriology’. The second deals with the prologue and with the Wisdom motif in particular against a background of Jewish Wisdom speculations. Finding no other passages that clearly express a doctrine of Christ’s pre-existence, Isaacs concludes that the brief allusion to his protological role in this chapter is atypical of a letter whose principal focus is soteriological. In the third study she examines four images used for heaven (promised land, holy city, royal court, sacred shrine) that can be shown to have both a spatial and a temporal reference.

Taken as a piecemeal study of the theology of Hebrews, this is a valuable book whose use of exegesis and comparative literary analysis is balanced and persuasive. The attempt to organize the material around the concept of ‘sacred space’, however, has a somewhat cosmetic feel to it, partly because it diverts attention from the christological concerns of the letter, but also because Isaacs fails to relate it to the consistent paraenetic burden—the exhortation to persevere—which arguably has better claims for structural priority than any theological motif. Although Isaacs covers the readership options well, her own assumption—that the destruction of the Temple is the cause of the crisis of faith—is only cursorily defended; for her thesis to be finally convincing it needs to be demonstrated more confidently that the need to relocate sacred space better fits the historical and paraenetic circumstances of the letter than, say, that of making good an imperfect understanding of salvation.