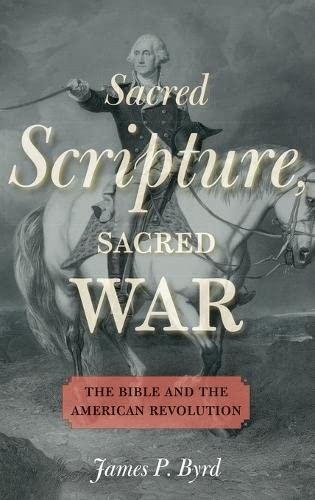 Sacred Scripture, Sacred War: The Bible and the American Revolution

No book was more widely read and respected in colonial America than the Bible. These Scriptures must have shaped and supported the patriotic cause in overthrowing the British government. But how? What verses were particularly popular? And how did these spiritually and patriotically zealous Americans explain passages such as Romans 13 while they denounced King George III and took up arms against him? These are some of the questions answered by James P. Byrd, assistant professor of American religious history at Vanderbilt University Divinity School and Graduate Department of Religion, in his book Sacred Scripture, Sacred War.

Byrd and his researchers painstakingly scoured 17,148 biblical citations from 543 sermonic sources between 1674 and 1800 to produce what he calls the “most comprehensive database on the Bible in colonial America” (p. 169). He offers this analysis, a less ambitious but similar task to the one undertaken by Harry L. Stout in Upon the Altar of the Nation: A Moral History of the Civil War (New York: Viking, 2006), as the front bookend to an American story where the Bible always factors prominently in war. Even those like Thomas Paine and Benjamin Franklin who did not believe it still used the Bible to advance their revolutionary aims. And as much as historians cite key pamphlets that circulated during this tumultuous era, their influence paled in comparison to the much more popular public teaching of sermons.

According to Byrd’s calculations, by far the most cited passage in colonial sermons was Rom 13. You cannot convince Americans who revere the Bible to take up arms against the authorities until you can persuade them that the apostle Paul was not directly addressing their situation: “Let every person be subject to the governing authorities. For there is no authority except from God, and those that exist have been instituted by God. Therefore whoever resists the authorities resists what God has appointed, and those who resist will incur judgment” (Rom 13:1–2). Another of the most frequently cited chapters of Scripture was the Sermon on the Mount, where Jesus says, “You have heard that it was said, ‘An eye for an eye and a tooth for a tooth.’ But I say to you, Do not resist the one who is evil. But if anyone slaps you on the right cheek, turn to him the other also” (Matt 5:38–39). It is not clear whether modern readers would find the colonial sermons persuasive, but Byrd is not judging contemporary application, only historical usage.

Byrd brings his imposing database to bear on decades of historical analysis about Revolutionary Era millennialism and says the evidence does not see colonial American preachers as preoccupied with the Bible’s apocalyptic visions. And when they did, books such as Revelation could cut both ways: sometimes to support the British government over the patriots and sometimes to project an inspiring future for America free from transatlantic meddling.

Historians engrossed in millennial symbolism, according to Byrd, miss the more obvious ways the Bible was employed. God’s Word gave young soldiers and militia courage to kill. The Psalms were especially popular in this regard. Since the colonists lacked military experience, they needed supernatural courage. “Colonial ministers did not shy away from biblical violence,” Byrd writes. “They embraced it, almost celebrated it, even in its most graphic forms” (p. 73). He identifies the Song of Deborah from Judg 5 as particularly influential, because it did three things: it celebrated killing, taught that victory comes not only from providence but also through militant initiative, and reminded Americans that victory requires sacrifice and courage. Another especially popular figure was Moses, because he led God’s people out of foreign oppression. In addition, Exod 15:3 refers to God as a “man of war.”

Americans were partial to Moses for another reason. Unlike David, who ruled as an absolute monarch, Moses led a republican government of laws. Thus George Washington was more often likened to Moses than to the warrior-king David, who had been corrupted by power. Nevertheless, David still figured prominently in this period. Between 1675 and 1800, six of the twenty most popular Bible texts featured in colonial sermons referred to him. Naturally, the story of David and Goliath stood out. Byrd writes, “For the Continental Congress, David’s victory over Goliath inspired colonists not to trust in sheer numbers and long odds, but to trust instead the miraculous possibilities of a courageous people united around a righteous cause” (p. 98).

Byrd’s work eliminates some of the fanciful speculation that tempts historians of this period. He forces them to contend with the statistics rather than particularly imaginative sermons that may turn out to be outliers. And readers need not fear that Byrd makes too much of the Bible’s influence on the Revolution. He merely means to demonstrate how this vivid, powerful book inspired Americans to overcome their doubts and fears to kill in the name of God and country. The methodology of this monograph has already inspired another focused on the Spanish-American War: Matthew McCullough, The Cross of War: Christian Nationalism and U.S. Expansion in the Spanish-American War (Madison: University of Wisconsin, 2014). Subsequent research can only expand historians’ interpretive arsenal and arm today’s preachers with humility before God’s Word as they see it stretched beyond credulity.

Collin Hansen is the editorial director for The Gospel Coalition and coauthor with John Woodbridge of A God-Sized Vision: Revival Stories that Stretch and Stir (Zondervan, 2010).